Dragon Gate Pro Wrestling returns to the illustrious Korakuen Hall once against for Fantastic Gate 2021. This is a big show compared to the oftentimes calm Dragon Gate Korakuen events. The event at hand features an Open the Brave Gate Championship match and a Mascara Contra Mascara Tag Team main event. Here is the card. 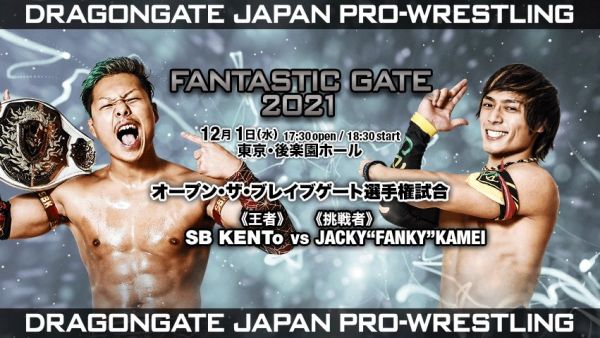 SBKENTo faced Jacky “Funky” Kamei for the Open the Brave Gate Championship back on October 17. This encounter saw SBK getting the win over JFK, and since then, SBK lost multiple direct falls. These were against Kamei’s fellow Natural Vibes stablemate, U-T, who has campaigned for a shot at the Open the Brave Gate Championship. Yet, SBK has ignored his requests up until recently.

After Kamei pinned H•Y•O is a tag match also involving SBKENTo and U-T, Kamei pleaded with his faction mate to let him challenge for the title. U-T agreed, telling Kamei to get his revenge then come back for the all Natural Vibes title match. SBKENTo then demanded that it would take place in Tokyo, and he didn’t mind making them both another defense on his record. Kamei has his back against the wall; can he come away with the win at Fantastic Gate 2021, or will SBKENTo’s reign of dominance continue?

The history between Dragon Dia and Dia Inferno has been well documented. Inferno’s entire existence has been to destroy his rival. Both men had a singles match at the last Korakuen event, which they swore would be their final encounter. However, chaos ensued and the match was thrown out. In this encounter, Dragon Dia unmasked Dia Inferno before he was tackled by Shun Skywalker, who was against it due to them also being masked wrestlers. This prompted Diamanté, who has been feuding with Skywalker, to attack Shun.

The Stakes Are Raised at Fantastic Gate 2021

Ryo Saito, the Dragon Gate General Manager, made his presence known before Dragon Dia asked for a Mask vs Mask Match with Dia Inferno. Saito reminded Dragon Dia that if he loses his mask, he will no longer be the heir apparent to Dragon Kid. Dragon Dia still wanted to go through with the match. Thus, Saito added both Diamanté and Shun Skywalker into the match, making it a tag team bout.

The rules of the match are simple: there will be no seconds allowed from Masquerade or R.E.D. Also, most importantly, the loser of the deciding fall will be the one forced to unmask. Someone will lose their entire identity in Korakuen Hall, or perhaps an old face will emerge. What will happen in the final chapter of these two sagas?