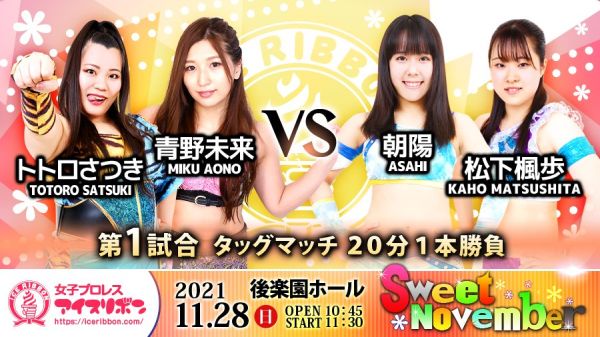 Miku Aono and Totoro Satsuki vs Asahi and Kaho Matsushita

After a singles match at Ota Ward, Asahi and Kaho Matsushita will team up to take on the team of Miku Aono and Totoro Satsuki. With Actwres girl’Z making serious changes to its business model, it seems like Aono could eventually become a more permanent member of the Ice Ribbon roster. She would be a welcome addition, as she works well with just about everyone. This is likely to be an easy win for Aono and Satsuki against the rookies. 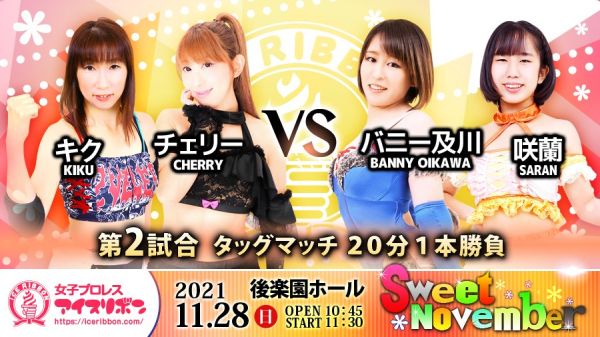 Cherry and Kiku vs Banny Oikawa and Saran

Two more rookies, Saran and Kiku, will square off on opposite sides of this tag match. This match also features Banny, who only has two years under her belt. Cherry will be the veteran talent that’ll provide experience. No matter who picks up the victory, it’ll be a good chance to showcase their ever-improving skill set. 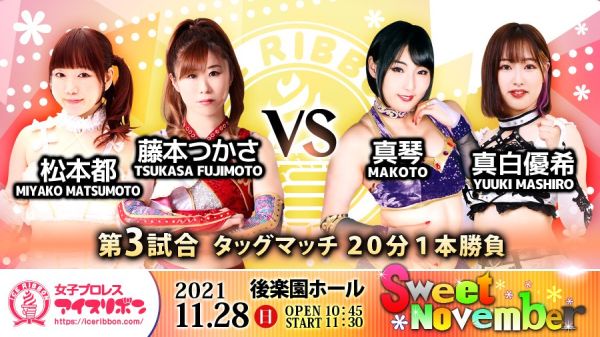 Miyako Matsumoto and Tsukasa Fujimoto vs Makoto and Yuuki Mashiro

After their hilarious match up at Ota Ward, Makoto will become an honorary member of the Gacha Kingdom as she teams up with Yuuki Mashiro. Their opponents are no easy task though; they’ll be facing two Ice Ribbon originals in Miyako Matsumoto and Tsukasa Fujimoto, who just so happen to be former ICExInfinity Champions. Fujimoto has only just lost her title to Tsukushi Haruka in an amazing match, so taking another loss won’t be in the cards for her. 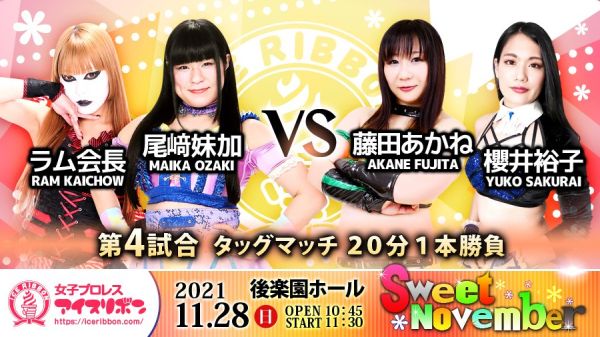 Yuko Sakurai makes her main show debut in Ice Ribbon; the AWG roster member has made a handful of appearances on P’s Party before this. Akane Fujita is the next in like to receive a chance at Rina Yamashita’s FantastICE Championship so it’ll be important for her to pick up a win. However, their opponents include the current Triangle Ribbon Champion Maika Ozaki and Ram Kaichow, who have been having a strong run in the company despite their unit RebelxEnemy not being as active due to Maya Yukihi holding the tag title and Yamashita being occupied with the deathmatch scene. It’s hard to tell who will win, but this should be quite a strong match before heading into the title matches. 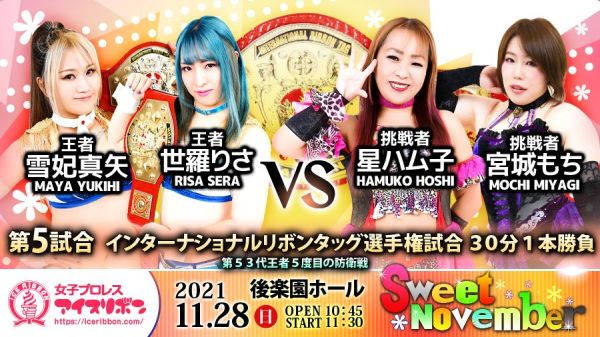 After another successful defence for Azure Revolution at Ota Ward, Hamuko Hoshi and Mochi Miyagi came out to stake their claim to the International Ribbon tag team titles, especially after defeating the team of Miku Aono and Momo Kohgo. Azure Revolution are still fighting towards beating the defence record for the tag titles, but this is just another hurdle on their way. The Lovely Butchers are one of the longest-tenured teams in Ice Ribbon and there aren’t many people that match their chemistry. This should be another fun and incredible defence for Azure Revolution.

After what some are saying was the match of the year for them, Tsukushi Haruka once again reached the top of the Ice Ribbon mountain by capturing the ICExInfinity championship from Tsukasa Fujimoto. Since there was nobody coming to challenge her, Haruka took matters into her own hands and challenged former champion Suzu Suzuki, despite her just losing a tag title challenge. Despite the strange circumstances, their styles match up perfectly with each other and it has all the opportunity in the world to be a hard-hitting first defence for Haruka.