Dragon Gate Pro Wrestling heads to Sendai, as they hold The Gate of Origin 2021. This is a show filled with new debuts, title matches, and much more. It will also be headlined by the Open the Twin Gate and Open the Dream Gate Championships. 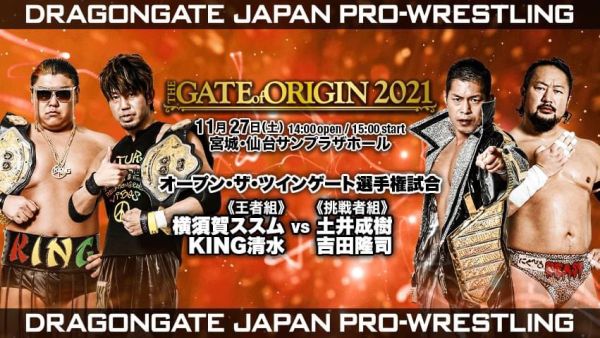 King Shimizu and Susumu Yokosuka have been on a tear as Open the Twin Gate Champions. They’ve only seemed to get better with each and every defense. After turning back the challenge of Pro Wrestling NOAH’s Haoh and Kenoh, it seemed like they could let their guard down a bit. That was until Takashi Yoshida got a pin over King Shimizu in a three-way tag team match. This gave Yoshida and Naruki Doi the right to challenge for the Open the Twin Gate Championship.

Back during Masato Yoshino’s retirement, Naruki Doi joked about forming a new DoiYoshi with Takashi Yoshida. However, that joke has become a reality and now they have a chance to capture the gold. Doi and Yoshida are no strangers to the Open The Twin Gate Championship. They won the belts multiple times with different partners. Can magic strike again for them, or will the Natural Vibes duo dance their way to another successful defense? 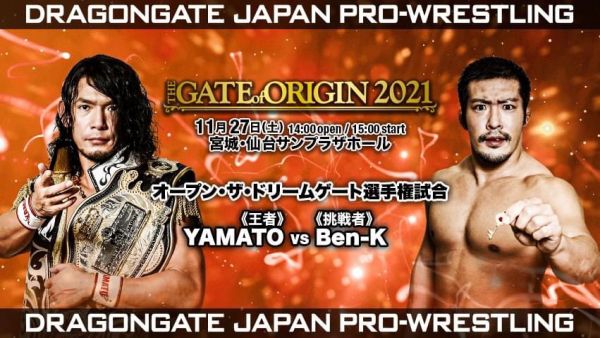 YAMATO’s mission of proving you don’t need to be young to usher in a new era seems to be working. He saw successful Open the Dream Gate title defenses over both Kota Minoura and BxB Hulk, seemingly proving he is still the almighty. After the defense against Hulk, Ben-K challenged his fellow HIGH-END stablemate to a title match. He challenged YAMATO once before this year, noting just because they’re in the same unit doesn’t mean he can’t challenge for the gold.

YAMATO accepted this challenge, and Ben-K has a chance to become a two-time Open the Dream Gate Champion. Last time he was champion, he actually beat YAMATO in a title defense at Dangerous Gate 2019. However, that was two years ago and both men are very different. Is it possible for YAMATO to turn back the challenge of the man who was once going to lead the new generation? Or is it possible Ben-K ends YAMATO’s last possible big run at the top at The Gate of Origin 2021?

Stay tuned to the Last Word on Pro Wrestling for more on this and other stories from around the world of wrestling, as they develop. You can always count on LWOPW to be on top of the major news in the wrestling world, as well as to provide you with analysis, previews, videos, interviews, and editorials on the wrestling world. Looking to watch Dragon Gate? All their live shows will be on their steaming service, Dragon Gate Network.