The road toward crowning an undisputed Super Asia Champion continues with ChocoPro #178. Though this is a one-match show, it aims to be a promising one, as multiple competitors will take part in an 8-person tag team match. How can Ichigaya Chocolate Square contain not only so many wrestlers but the big personalities that come with them? It can’t be denied that this seemingly mild-mannered venue has been host to a number of solid matches and it appears that this trend will continue heading into this. Here’s what to know before the action airs on the official Gatoh Move Pro Wrestling YouTube channel. 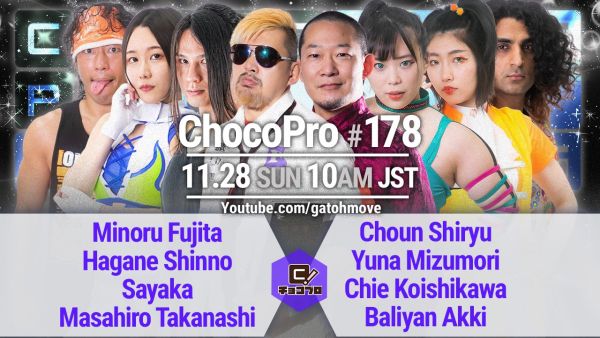 As mentioned earlier, ChocoPro #178 is a one-match show, featuring a single 8-person tag team contest. The overarching theme of this match is the Super Asia Championship, which is held by two competitors: Minoru Fujita and Chon Shiryu. Prior to this month, the title was solely held by Fujita. However, when he fell ill following COVID-19, it was decided that an interim champion would be crowned. On ChocoPro #170, Shiryu won a four-way contest, becoming the interim titleholder in Fujita’s absence. “The Dragon” has successfully defended the interim championship once, against Yuna Mizumori on Episode #172. In due time, “The Dragon” will battle Fujita in singles action, crowning an undisputed champion.

Before this takes place, however, Fujita will make this ChocoPro return on this episode. This 8-person tag team contest allow the bird mask-wearing deathmatch specialist to work off ring rust. Furthermore, it boasts other stories to tell. Case and point, both members of Egg Tarts, Chie Koishikawa and Hagane Shinnou, will be on opposing teams. Egg Tarts has been one of the show’s defining units since the beginning of this year. Thus, it will be interesting to see what happens if they happen to lock horns. Perhaps the biggest story, aside from the inevitable showdown between Fujita and Shiryu, is the involvement of Baliyan Akki.

This ChocoPro #178 match was initially announced on the Episode #175 post-show rundown. Originally, Akki and Masahiro Takanashi were on opposite teams, meaning that Akki would have teamed with Fujita. However, Akki expressed displeasure with this. He was happy to see Fujita return, of course. On the flip side, he desired to be on the team opposite of the Super Asia Champion he lost to on Day 2 of ChocoPro #100. Akki pleaded with Takanashi to have the change made. After little deliberation, their roles were swapped. Between the aforementioned showdown between Fujita and Shiryu and the uphill battle Akki seems to be having with himself, there are major stakes at play heading into ChocoPro #178.