It’s a birthday bash on ChocoPro #177, as the Gatoh Move Pro Wrestling crew and fans celebrate the interim Super Asia Champion. Chon Shiryu, who turned 43 years old this past weekend. Despite his age, he continues to wrestle at a steady pace, even going so far as to claim the aforementioned title in the absence of Minoru Fujita. The inevitable battle between these two legends is slowly approaching. Nonetheless, there are still a few shows to go until then. This brings us to this upcoming episode of ChocoPro and here is what viewers should know. 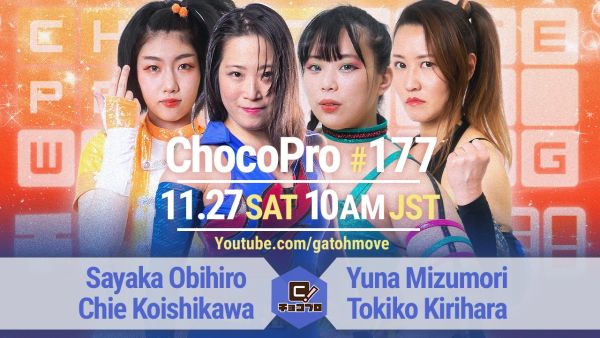 The opening match of ChocoPro #177 sees Sayaka Obihiro teaming with Chie Koishikawa, the latter being something of a protege to the former, to take on Yuna Mizumori and Tokiko Kirihara. The last time that ChocoPro viewers saw Obihiro, she was taking on Antonio Honda in a curious singles match. In Russian roulette-like circumstances, if an individual was pinned for a two-count, they would have to eat a cream puff from a plate of several. However, among these seemingly innocent treats was one filled with wasabi. Unfortunately, Obihiro ended up eating the dreaded wasabi-filled pastry, racing out of Ichigaya Chocolate Square to compose herself. Hopefully fully recovered from this instance, Gatoh Move’s “Blue Heart” joins forces with “Too Much Energy,” who is coming off a major tag team victory on the last show.

On ChocoPro #176, Yuna Mizumori and Tokiko Kirihara were on opposite sides of Ichigaya. They faced off in tag team competition, Mizumori working alongside Koishikawa and Kirihara aligning herself with Baliyan Akki. Kirihara and Akki put forth a valiant effort. Despite this, it was the colorful, powerful team of Mizumori and Koishikawa that emerged victorious. On paper, Gatoh Move’s “Pineapple Girl” and the “Comaneci” specialist make for a formidable duo. “Yunamon’s” power and “Otoki’s” martial arts expertise would make for a winning combination in any circumstance, but will this help them achieve victory on ChocoPro #177?

Closing out ChocoPro #177 will be a tag team match featuring the recent birthday boy. It will also be the platform for a debuting star. Chon Shiryu, who recently celebrated his 43rd birthday, teams with longtime ally and opponent Masahiro Takanashi to take on Baliyan Akki and DDT Ganbare Pro’s own Ken Ohka. To say that Akki has been in a slump would be an understatement. Though he remains one-half of the Asia Dream Tag Team Champions, he has seemingly been lost since Mei Suruga’s excursion to America for All Elite Wrestling. For context, of the past 7 ChocoPro matches Akki wrestled, he only won 2. This slump can be attributed to several factors, including his tag team partner being away and the Super Asia Championship. Regardless, it can’t be denied that his confidence has been shaky.

Akki will have to get his mind right if he intends to win on his show. He won’t be alone, however, as he’ll be working alongside the debuting Ohka. For those that don’t know, this particular individual has been a longtime DDT Pro-Wrestling competitor, dating back to 2001. He also learned under Takashi Sasaki and Último Dragón, which speaks to his credentials. Throw in the fact that he’s won several titles in DDT, including the KO-D Openweight Championship, KO-D Tag Team Championship, and 8 Ironman Heavymetalweight championship reigns, and it’s easy to see why he may make his ChocoPro debut a success. Keep in mind that this is his first Gatoh Move appearance since February 2013; back then, he teamed with Sayaka Obihiro in a losing effort to RESET. Needless to say, a victory is all the more critical.