Goddesses of War only had a few shows before the pandemic put them on a hiatus, but they are back now! The women of New Jersey (and beyond) are prepared to do battle like never before and in a show with big names there are also going to be a lot of firsts! Here’s what to know about Goddesses of War’s Battle of Athena. 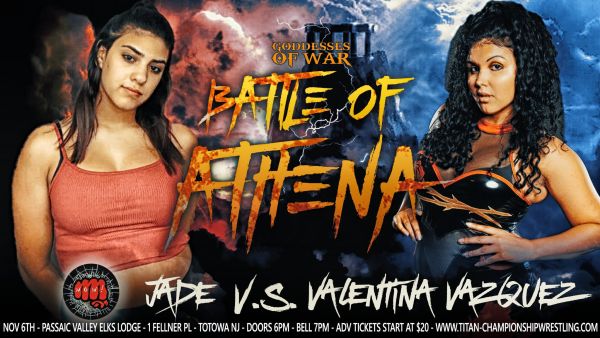 Valentina Vazquez is perhaps the most underrated and underutilized wrestler in all of New Jersey (and there are a lot of wrestlers coming out of New Jersey) Why she is not a household name or known amongst all independent wrestling fans is unclear, but with consistent bookings and ample to display her skills, Vazquez will prove time and time again why she is a name you will not soon forget. Unfortunately for Jade, she is in this match, and therefore, in the way of Vazquez’s quest for gold. 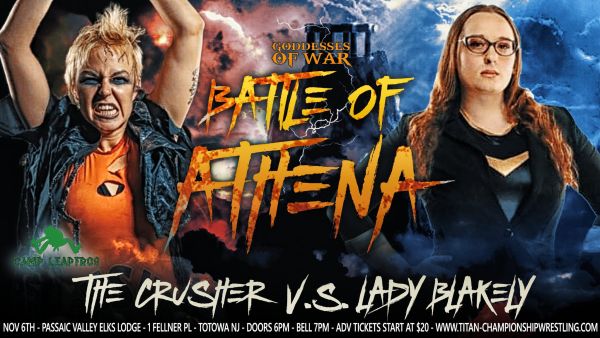 The Crusher vs Lady Blakely

The Crusher is perhaps best known for being a part of Camp Leapfrog (sometimes in a tag team known as Crushcakes) while Lady Blakely is best known for being part of H2O. This is going to be a clear clash of styles as The Crusher’s punk rock style doesn’t look like it will mesh well with… Whatever it is Blakely is going for. Lady Blakely could still put up a fight though, it’s just too bad that The Crusher loves a good fight. 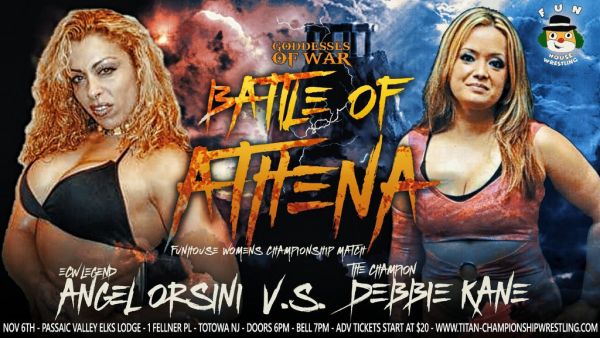 Debbie Kane has been a staple in wrestling for quite some time and she has also made appearances in TiTan Championship Wrestling before. Angel Orsini is an East Coast Pro Wrestling original who appears to be on her comeback tour; what better way to prove you’ve still got it than to win some gold? One of the fun things about independent wrestling promotions working together is how, on shows such as this, you get to see title defenses of championships from other promotions. The stakes become higher and the overall show just benefits from it so much more. This should be a great old-school-style wrestling match. 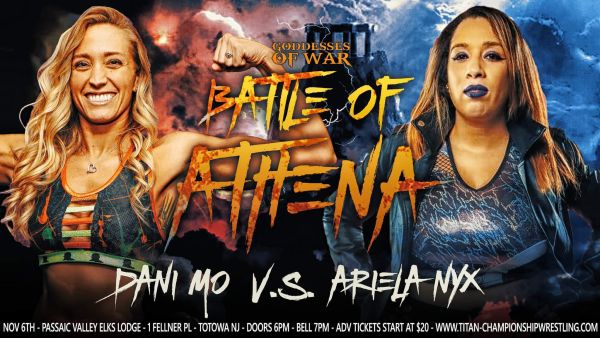 While Dani Mo has been tearing up the women’s division everywhere she goes (most recently appearing in All Elite Wrestling), Ariela Nyx is slowly making a move to position herself as being one of the top names in the game. These are both two wrestlers who you may or may not know- neither is unknown but neither is widely known- but by the end of this match, that all might change, with both of these wrestlers making a name for themselves. 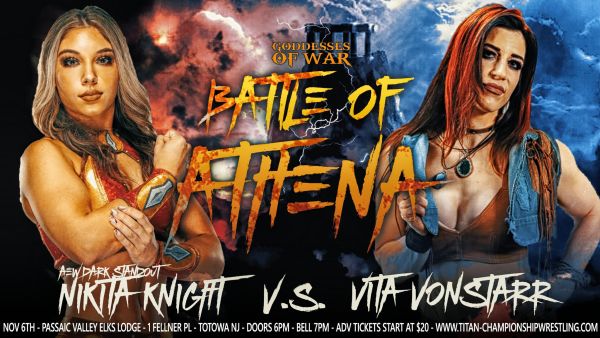 Nikita Knight has appeared in Ryse Pro Wrestling and, most recently, for AEW. Vita VonStarr has made a name for herself in Ring of Honor and, before that, by working in many prominent New England promotions. It can feel as if VonStarr might have the edge in this match, but ultimately, that might just leave Knight underestimated and able to secure the win. 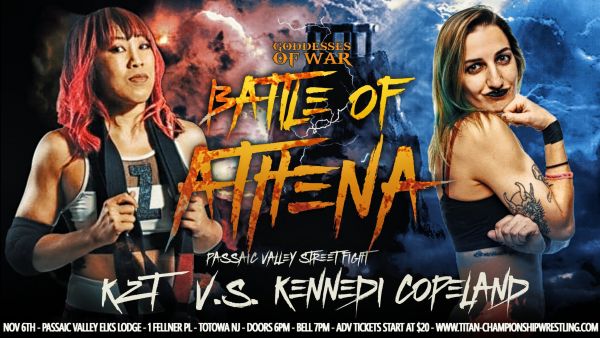 Knowing that a match is going to be a Street Fight is one thing, but knowing that match features KZT taking on Kennedi Copeland is an entirely different story. KZT has the background of facing Janai Kai in Josh Barnett’s Bloodsport, among other matches, to give her all of the credibility in this fight. At the same time, every match Copeland is in seems to be a Street Fight. Being the current H2O Hybrid Champion, as well as the winner of the recent Tremont’s Deathmatch Tournament just this past weekend, seems to put Copeland at an advantage. Either way, at Goddesses of War’s Battle of Athena, this is going to be a fight that will not end easily and blood will be shed. 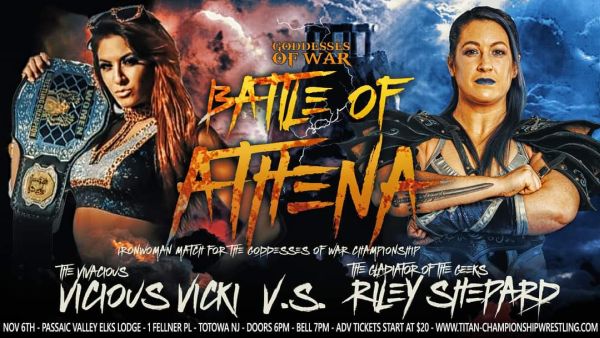 First-Ever Goddess Ironwoman Match for the Goddess Championship: “The Vivacious” Vicious Vicki (c) vs “The Gladiator of the Geeks” Riley Shepard

Since the dawn of Goddesses of War, there has been history between Vicious Vicki and Riley Shepard. During the time that Goddesses of War had their first show and now, something has changed within Shepard. Some fans are quick to pass judgment and simply say that she became a heel, turning her back on all which she once stood to fight for. Others see this story as being a bit more complex. A series of underhanded tactics allowed Vicki to score wins not just in TiTan Championship Wrestling but other promotions as well. Knowing this, it begins to feel as if Shepard is not turning her back on anyone, but rather, doing what needs to be done to ensure that she is not robbed of her opportunity once again. Is Shepard a heel? If she is, she is justified in becoming one. The way that this started with a clear hero (Riley Shepard) and common enemy (Vicious Vicki) and that dynamic has shifted through time is something out of the pages of a comic book. Regardless of who wins this match, these two seem destined to do this forever.

Goddesses of War Presents Battle of Athena takes place in Totowa, NJ on November 6, 2021. Tickets and additional information can be found at: http://www.titan-championshipwrestling.com.

Stay tuned to the Last Word on Pro Wrestling for more on this and other stories from around the world of wrestling, as they develop. You can always count on LWOPW to be on top of the major news in the wrestling world, as well as to provide you with analysis, previews, videos, interviews, and editorials on the wrestling world. Learn more about Goddesses of War events on the official TiTan Championship Wrestling Twitter.