This Friday, Game Changer Wrestling brings together the grittiest and hardest-hitting of fighters for Josh Barnett’s Bloodsport 7. Those that are familiar with the history of this event will know the rules. The matches scheduled will take place on a canvas without traditional ring ropes and turnbuckles. Furthermore, the only ways in which matches can conclude are by submission or knockout. For those that are witnessing their first Bloodsport, it will quickly become evident that this is beyond any standard professional wrestling contest. Here is what you should know about the action set to take place at GCW Josh Barnett’s Bloodsport 7. 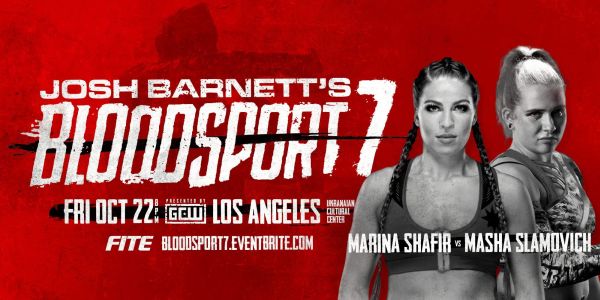 The GCW Debut of a Horsewoman

One of the first matches announced for Josh Barnett’s Bloodsport 7 promises to be a hard-hitting women’s encounter. This match will feature the company debut of Marina Shafir, who WWE fans may know from her various appearances on NXT and 205 Live. The real-life wife of Roderick Strong is an accomplished mixed martial artist as well, having started her combat career in 2012. Shafir won all 5 of her amateur fights before eventually going pro in 2014. Needless to say, Bloodsport is tailor-made for the Moldovan fighter and grappler. However, to make her upcoming GCW debut a success, this “Horsewoman” – a title shared with real-life friends and fellow fighters Jessamyn Duke, Shayna Baszler, and Ronda Rousey – will have to overcome a hungry competitor in Masha Slamovich.

Hailing from Moscow, Russia, Masha Slamovich is among the most prominent women’s wrestlers on the independent scene today. 2021 has been an especially busy year for Slamovich, who’s appeared for such organizations as IMPACT Wrestling, the National Wrestling Alliance, All Elite Wrestling, and of course, GCW. She’s no stranger to the latter organization; case and point, she competed in Josh Barnett’s Bloodsport 6 earlier this year, where she was bested by current NWA World Women’s Tag Team Champion Allysin Kay. Slamovich’s style is one that complements Bloodsport well, as she brings a combination of technical savvy and sheer power to the table. Following a loss in her first Bloodsport event, can she make up for it with a victory over Shafir this Friday? 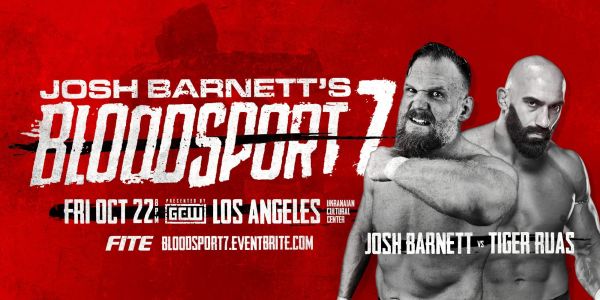 In Memory of Roberto Leitao Sr.

This match will be held in memory of the late Roberto Leitao Sr., who passed away this past November following COVID-19 complications. Born in Santa Catarina, Brazil, Leitao was an accomplished grappler and martial artist. In particular, he was proficient in Luta Livre, otherwise known as Brazilian Catch Wrestling. “Mestre Leitao,” as he was also known, founded the Brazilian Confederation of Associated Wrestling, Brazil’s first wrestling organization, in 1979. In 1988 and 1992, he competed in the Olympic Games in Seoul, South Korea and Barcelona, Spain, respectively. As far as his role as a mentor, Leitao’s influence can still be seen in fighters today. At Josh’s Barnett’s Bloodsport 7, two men that regard Leitao as “Master” will fight in his honor.

“The Warmaster” Josh Barnett is a man that needs no introduction. In addition to being the very competitor Bloodsport events have been named after since early 2019, he is an accomplished mixed martial artist and professional wrestler. Having learned under such names as Karl Gotch and Billy Robinson, Barnett competed in Japan, specifically Antonio Inoki’s Inoki Genome Federation and New Japan Pro-Wrestling, for several years. Meanwhile, WWE fans may know Tiger Ruas during his brief period in the Vince McMahon-owned organization as Arturo Ruas. This Lebanese-born Brazilian fighter wrestled primarily on the NXT brand, though he enjoyed a few appearances on Monday Night Raw during the short-lived Raw Underground experiment. Proficient in amateur wrestling and Jiu-Jitsu, there is perhaps no better platform for Ruas to make his GCW debut than Josh Barnett’s Bloodsport 7. 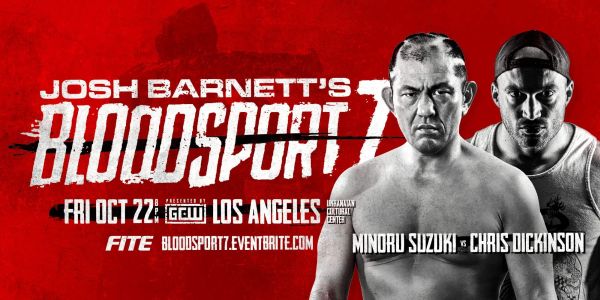 A Fight Years in the Making

Josh Barnett’s Bloodsport 7 will also be the stage for a fight between “The King” and “The Dirty Daddy,” making for a hellacious bout. Originally, these two were supposed to compete at Josh Barnett’s Bloodsport III last year, though the match and event in question were postponed amidst COVID-19. However, this is an example where absence certainly didn’t make the heart grow fonder. At GCW The Aftermath earlier this month, Minoru Suzuki was successful in his match against Joey Janela. Post-match, Chris Dickinson made his way to the ring, not only to check on Janela but confront Suzuki. Taking the mic, Suzuki demanded that Dickinson leave his ring. Dickinson offered a rebuttal, hyping their upcoming match at NJPW Strong Showdown and stating they had unfinished business in GCW. This leads us to Bloodsport this Friday.

It’s important to note that Minoru Suzuki is a two-time Bloodsport competitor, defeating Matt Riddle in April of 2018 and fighting Josh Barnett to a draw in April the year after. Suzuki’s ability to thrive in Bloodsport should come as no surprise to those that are familiar with his in-ring work. Having competed in MMA since the early 1990s, “The King” is practically tailor-made for an event of this nature. Dickinson is a Bloodsport veteran in his own right, competing in 7 of the events held throughout GCW history. Furthermore, he’s been victorious in his past two fights, besting JR Kratos this past February and Shane Mercer the following April. Dickinson is heading into Josh Barnett’s Bloodsport 7 with a purpose, having lost the aforementioned NJPW Strong Showdown match with Suzuki. Expect their sequel encounter to be even more unrelenting.

Stay tuned to the Last Word on Pro Wrestling for more on this and other stories from around the world of wrestling, as they develop. You can always count on LWOPW to be on top of the major news in the wrestling world, as well as to provide you with analysis, previews, videos, interviews, and editorials on the wrestling world. GCW Josh Barnett’s Bloodsport 7 is set to air Friday at 11 PM EST on FITE. Tickets are also available via Eventbrite.