Following ChocoPro #160, there will only be 2 episodes left in the ninth season of Gatoh Move Pro Wrestling‘s YouTube program. To say that this has been an action-packed season would be an understatement, though it’s important to note that we aren’t done yet. This upcoming episode of ChocoPro #160 features a big tag team main event. In addition, we will see the return of a beloved guest in the confines of Ichigaya Chocolate Square. Without wasting any further time, let’s dive deep into ChocoPro #160. 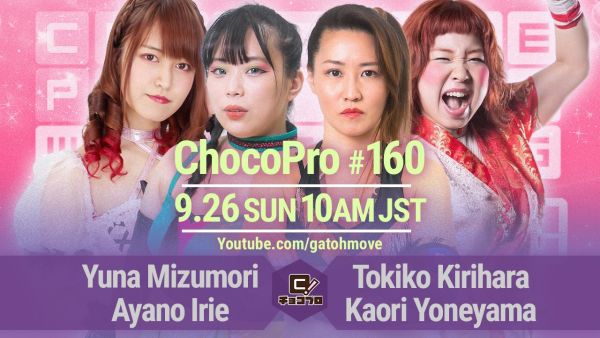 Opening ChocoPro #160 is a tag team contest that sees the return of a joshi veteran. On one side of Ichigaya Chocolate Square will stand “The Pineapple Girl” herself, Yuna Mizumori. “Yunamon” is coming off a big win on ChocoPro #158, where she teamed with Masahiro Takanashi in a winning effort against the duo of Chie Koishikawa and Baliyan Akki. On this episode, Mizumori teams with Ayano Irie of Actwres girl’Z. The panda-loving Color’s star is no stranger to ChocoPro, as she made 2 other appearances on the show this year. Though Irie won her previous ChocoPro match, back on episode #119, “The Snow Princess Idol” and her tropical powerhouse of a partner will have their work cut out for them this time.

One of their opponents is the ChocoPro stalwart known as Tokiko Kirihara. “Otoki-san” was last seen on episode #155, where she picked up a tag team victory alongside the former sumo wrestler from Argentina, Hoshitango. Kirihara’s approach is largely no-nonsense – at least not when paired with Antonio Honda, though this is another story entirely – which makes the work she can do alongside her tag team partner here all the more interesting. Making her ChocoPro return is Kaori Yoneyama, who joshi fans will be familiar with due to her work in PURE-J, World Wonder Ring Stardom, and elsewhere. The wily vet was last seen on ChocoPro #146, back in August, where she bested Koishikawa. Based on the unique tandems involved, this will be a tag team encounter to keep an eye on.

In the main event, two fan favorite tag teams do battle. It can’t be understated just how dominant Best Bros have been, even before winning the Asia Dream Tag Team Championship in late December. Mei Suruga and Baliyan Akki have remained atop the Gatoh Move tag team scene, accepting challenges from and defeating all tandems placed in front of them. From RESET to TropiCalamari and beyond, it’s fair to say that Suruga and Akki have seemingly unstoppable momentum. With that said, there are only a few episodes left until ChocoPro season 9 comes to a close. There may very well be new challengers waiting in the wings. Depending on how Best Bros’s opponents do on ChocoPro #160, challengers are likely to come sooner rather than later.

Reuniting on ChocoPro #160 is Chie Koishikawa and Hagane Shinnou, collectively known as Egg Tarts. The last time Egg Tarts teamed up was back on ChocoPro #144 this past August. On this show, despite a valiant effort, Koishikawa and Shinnou fell to Antonio Honda and Chris Brookes. In fact, Egg Tarts have seen shaky luck during much of 2021, between their Asia Dream tag team title match loss in February to Shinnou’s inability to capture the Super Asia title from Minoru Fujita the following July. This upcoming episode of ChocoPro is a vital one for Egg Tarts. Simply put, a win will help them get back into the tag team title discussion. Regardless of the outcome, be sure not to miss this main event.