With ChocoPro season 9 slowly but surely whittling down, it’s easy to imagine that the Gatoh Move Pro Wrestling crew has plenty left to offer. This has been a defining period in the show’s history, as they have been without both Lulu Pencil and the company’s fearless leader, Emi Sakura. While they’ve been in America for an undisclosed period of time, the rest of the Gatoh Move crew has been tirelessly putting together shows for the enjoyment of fans. ChocoPro #158 should be no different, as it features two matches set to unfold in Ichigaya Chocolate Square. Here is what to know. 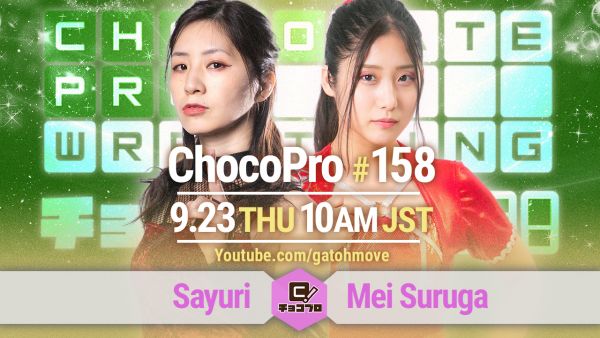 Opening ChocoPro #158 will be a singles contest between Gatoh Move’s “Kunoichi” and the devilish “Apple Girl” herself. Sayuri will battle Mei Suruga in one of multiple encounters they’ve had in the past. Their last singles match took place on episode #70 this past September, when Suruga picked up a victory over the fourth-generation wrestler. Altogether, they’ve had 3 singles matches against one another. Though Sayuri has come up short in each bout, it’s fair to say that she’s only gotten better in time. She’s developed a wrestling style all her own, focusing on agility and illusionary tactics to keep her opponents on the defensive. Sayuri has been chomping at the bit for that elusive singles victory.

To do so, she will have to overcome a game Mei Suruga. Despite her prominent position as one-half of the Asia Dream Tag Team Champions, “Mei-chan” hasn’t had the best luck on recent episodes. She lost her past 3 ChocoPro matches, each one in a tag team setting. In fact, her biggest victories have taken place alongside Baliyan Akki, her fellow tag team partner and Asia Dream tag team titleholder. It’s easy to look at this match as a vital point for Suruga. Simply put, a victory will put her back on track, not only as a singles competitor but a wrestler in general. Expect this match to be fast-paced, albeit with a few tricks peppered in for good measure.

The main event of ChocoPro #158 will be a big main event encounter. It’s also one where the phrase “any friend of theirs is a friend of mine” is incredibly appropriate. Chie Koishikawa and Baliyan Akki, both of whom are familiar with Mei Suruga, will team up to take on Chris Brookes‘s notable tag team partners, Yuna Mizumori and Masahiro Takanashi. As stated earlier, Akki is Asia Dream Tag Team Champions with Suruga; meanwhile, the energetic “Chiezo” has formed a solid tag team with “Mei-chan” as Warm Caterpillars. On paper, the duo of Koishikawa and Akki is a formidable one, blending frantic offense with strike and aerial-focused combat. They’ve teamed up on multiple occasions in the past, in fact, though lost most of their matches as a team.

Meanwhile, both Yuna Mizumori and Masahiro Takanashi have been linked to Chris Brookes in different ways. Together, Mizumori and Brookes are known as TropiCalamari, having worked together on episodes of ChocoPro and even in DDT Pro. It’s in this tandem that Brookes is more colorful, donning makeup courtesy of his “Tropical Girl” tag team partner. Brookes’s team with Takanashi, otherwise known as Calamari Drunken Kings, is a more long-standing duo. They are as thick as thieves and, as longtime viewers will attest, just as crafty. CDK is also known to enjoy a beverage after a match, win or loss notwithstanding. Can the unlikely duo of Mizumori and Takanashi come out victorious on ChocoPro #158?