There are 10 shows to go in ChocoPro season 9, and based on what we know thus far, the Gatoh Move Pro Wrestling crew is set to make the most of their time. ChocoPro #153 is fast approaching, and as always, it will air live on the official Gatoh Move YouTube channel before being made available for on-demand viewing. There are a few matches set in place. After the bell-to-bell action has subsided, the participants will take part in the traditional janken tournament, the prize being a celebratory sweet. Without any further delay, let’s take a deep dive into the action set for ChocoPro #153. 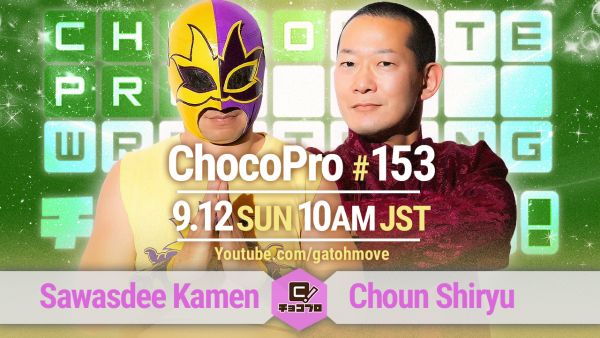 In singles action, the masked mascot of Gatoh Move in Sawasdee Kamen will battle “The Dragon” Chon Shiryu. Wearing a purple-and-yellow mask, as well as matching attire, it’s easy to see which company Sawasdee Kamen represents. With that said, his success within the confines of Ichigaya Chocolate Square has left something to be desired. For instance, two episodes ago, he teamed with Mei Suruga in a losing effort against the duo of Masahiro Takanashi and Hoshitango.

For most of 2021, Chon Shiryu has wrestled primarily in Ichigaya, whether solo or alongside Sayuri as the duo known as Dragon Ninja. On the same episode Koishikawa suffered the aforementioned six-person tag team loss, Shiryu battled Ichigaya rival Masahiro Takanashi to a 10-minute draw. ChocoPro viewers know that this wasn’t the first time they’ve faced off, nor will it be the last. In any event, the former 4x DDT Ironman Heavymetalweight Champion is set to collide with the mascot of Gatoh Move himself. Who will come away with the W? 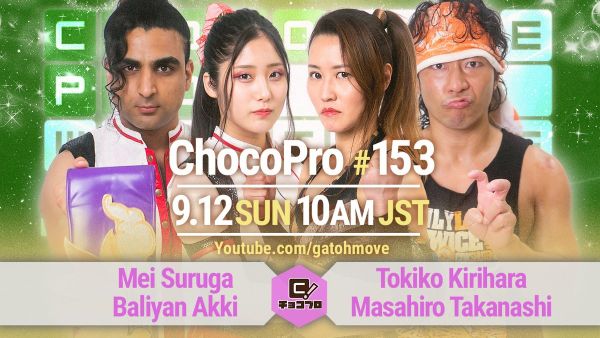 In tag team action, on ChocoPro #153, the Asia Dream Tag Team Champions take on a duo that meshes hard-hitting, submission-savvy combat with experience and grit. Mei Suruga and Baliyan Akki, both of whom made the 31st annual PWI 500 for Pro Wrestling Illustrated, have been ruling the roost as Gatoh Move’s tag team titleholders. With that said, Best Bros have yet to defend the Asia Dream Tag Team titles during ChocoPro season 9. This begs the question: who will be the ones to step forward and issue the challenge they’re looking for? As they await future challengers, Suruga and Akki will take on the combination of Tokiko Kirihara and Masahiro Takanashi.

If there’s any one fourth-generation Gatoh Move star that can be considered the most physically imposing, it’s Tokiko Kirihara. As mentioned earlier, “Otoki” fights her matches with a combination of strikes and submissions. Though she’s often on the receiving end of losses against more seasoned wrestlers, oftentimes she gets the best of her fellow fourth-generation wrestlers. On ChocoPro #153, she teams with Masahiro Takanashi, who will be celebrating his 18th anniversary on the next episode. Since making his official return to the action, he has, more often than not, been successful in his Ichigaya matches. Can Takanashi start the road to said anniversary with a tag team victory over the champions?

The main event of ChocoPro #153 will see recent tag team partners collide in singles action. On episode #150, Chie Koishikawa and Yuna Mizumori teamed up to take on Best Bros in a nontitle match. Despite their best efforts, “Chiezo” and “Yunamon” were no match for the reigning Asia Dream Tag Team Champions. Two episodes later, Koishikawa and Mizumori joined forces again, this time to battle Baliyan Akki and Super Asia Champion Minoru Fujita. Once again, the odds were not in the favor of the exuberant duo. It would seem that these losses will fuel this match, making it an intense encounter between two energetic personalities.

This won’t be the first singles encounter between Koishikawa and Mizumori, either. In fact, their most recent encounter took place at a DDT Ganbare Pro event; in the second match of the show, Koishikawa fell to “The Tropical Fairy.” They also fought within the walls of Ichigaya Chocolate Square, their latest encounter dating back to ChocoPro #115 this past May. Each and every time, Koishikawa fell to Mizumori. Could ChocoPro #153 be the time where the girl with “Too Much Energy” finally picks up a singles victory over her more experienced opponent? Regardless, this should be a match not to miss.