It’s celebration time on ChocoPro #152. On this episode, Gatoh Move Pro Wrestling celebrates its 9th anniversary! Headed by Emi Sakura and longtime wrestling fan Prachapoom “Pumi” Boonyatud, Gatoh Move was established in 2012; Pumi would go on to commentate on various matches and shows for the promotions pre-ChocoPro. Originally operating in both Thailand and Japan, Gatoh Move was originally known as Bangkok Girls Pro Wrestling before eventually being rebranded under the name wrestling fans know it as today. Sakura’s little promotion that could captured the hearts of viewers in the years that followed, developing not only a solid fan base but Japanese women’s wrestlers of the future. Now, on episode #152 of Gatoh Move’s long-running YouTube show, a major milestone will be celebrated. Here is what to know about the action to come. 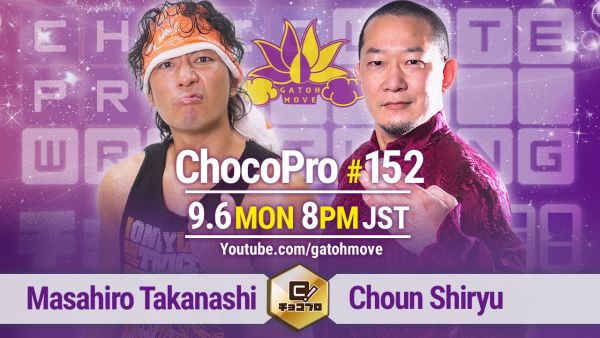 Starting off the Gatoh Move 9th anniversary edition of ChocoPro is a singles rematch. Prior to his official return to action this past July, Masahiro Takanashi worked a single exhibition match. This took place on episode #85 of ChocoPro, his opponent being “The Dragon” Chon Shiryu. The two wrestled in a 5-minute exhibition contest that ended in a draw, neither man unable to pick up the victory over the other.

Since then, Takanashi has been a regular competitor on the show, winning the lion’s share of his matches. Now, less than two months later, Takanashi faces Shiryu once more. This time, however, it will take place in a traditional singles bout. It’s difficult to predict who will come out of this contest victorious; both men have found success within the confines of Ichigaya Chocolate Square as of late. Regardless of the outcome, expect them to give everything they have on ChocoPro #152. 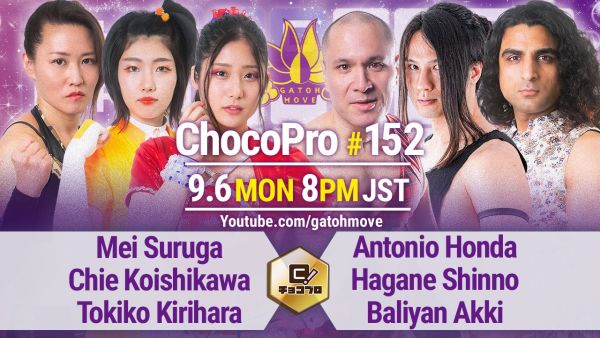 Next up, on ChocoPro #152, is a six-person contest that Ichigaya Chocolate Square may struggle to contain. On one side of the intimate wrestling venue will be three of the company’s stalwart women’s wrestlers, Mei Suruga, Chie Koishikawa, and Tokiko Kirihara. On the other side will be the trio of Antonio Honda, Hagane Shinnou, and Baliyan Akki. What draws intrigue to this particular match – and longtime ChocoPro fans will agree – is that tag team partners are on opposite ends.

Mei Suruga and Baliyan Akki, the reigning Asia Dream Tag Team Champions, are the top team in Gatoh Move known as Best Bros. Mixing Koishikawa’s energetic demeanor with Shinnou’s more stoic approach, they have been a regular tandem as Egg Tarts. Finally, Kirihara and Honda have built a following as the mischievous, occasionally underhanded yet melodious duo of Black/White Comaneci. It will be interesting to see how this match unfolds now that the formulas of three established ChocoPro tag teams have been shaken.

ChocoPro #152 is the Gatoh Move 9th anniversary show. Thus, it’s only appropriate that the main event features two Emi Sakura proteges. Yuna Mizumori, “The Tropical Fairy” of ChocoPro, has been a fan favorite for quite a few years now. The idol-turned-fighter began her professional wrestling career in 2018, learning under Sakura. Mizumori would develop as one the most successful Gatoh Move projects, becoming a 2x Asia Dream Tag Team Champion and, more recently, teaming with TropiKawaild companion SAKI to win the One of a Kind Tag League. Simply put, “Yunamon’s” spot in the main event is deserved.

Not unlike Mizumori, as well as the rest of Gatoh Move’s bred talent, Makoto is an Emi Sakura “original” of sorts. In fact, when Sakura began forming Ice Ribbon in 2006, Makoto was brought along. “The Oriental Doll” has gone on to achieve considerable success, especially as a tag team wrestler. In addition to winning tag team gold in Ice Ribbon and REINA, just to name a few organizations, she is currently one-half of the SEAdLINNNG Beyond the Sea Tag Team Champions; she shares this accolade alongside fellow Las Fresa de Egoistas member ASUKA. No matter where this freelancer heads next, it’s fair to say eyes will be on her.

Yuna Mizumori and Makoto are no strangers to each other, either. In two of “The Pineapple Girl’s” Actwres girl’Z appearances, she teamed with “The Oriental Doll” in tag action. They have also been on opposite sides of the ring; in March of 2019, TropiKawaild bested Makoto and current All Elite Wrestling star Riho to win their first Asia Dream Tag Team Championship. ChocoPro #152 will see Mizumori and Makoto face each other, in singles action, for the very first time. Who will emerge victorious? Tune into the official Gatoh Move YouTube channel to find out.