Once more, Game Changer Wrestling and Black Label Pro are partnering up to bring some of the best independent wrestling action to be seen. This Friday, live from Grand Sports Arena in Chicago, Illinois, the two promotions will hold 3 Cups Stuffed. This isn’t the first time that GCW and BLP cohosted an event; think back to the prequel event, 2 Cups Stuffed, which took place in August of 2019; this particular event saw such action as Nick Gage defending the GCW World Championship against EFFY. GCW x BLP: 3 Cups Stuffed should prove to be just as exciting, if not more so. Here’s what to know ahead of this Friday evening. 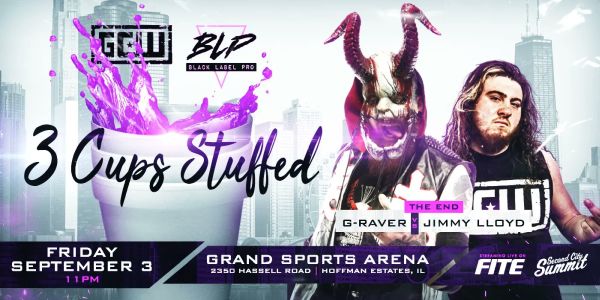 A Blood Feud Comes to An End

To fully understand the importance of this match, wrestling fans must look back to August 30, 2019. At 2 Cups Stuffed, in a Doors, Ladders, and Chairs Match, G-Raver faced Kobe Durst, Logan Stunt, Shane Mercer, Matthew Justice, Blake Christian, Alex Zayne, Tony Deppen, and of course, Jimmy Lloyd. During the course of the match, G-Raver and Lloyd battled atop ladders. During this encounter, G-Raver landed on a series of light tubes. This injury caused severe nerve damage in his hand, keeping him on the shelf for an extended period. G-Raver didn’t forget what happened at 2 Cups Stuffed, however. He made his GCW return at the Nick Gage Invitational 5 event this past November. At this show, Lloyd competed in a Scramble Match. Following the match in question, G-Raver made a surprising appearance. He viciously attacked Lloyd, lighting him on fire.

From there, G-Raver and Jimmy Lloyd’s feud intensified. They competed against each other at GCW events including Take Kare and Ashes to Ashes, their hatred for one another continuing to fester. Their feud would take a few surprising turns as well. Chief among these was the Zona 23 vs. GCW event this past July when the unlikely duo of G-Raver and Jimmy Lloyd defeated Los Mazisos for the GCW Tag Team Championship. This union was short-lived, however, as they lost the titles less than one week later to Second Gear Crew’s Matthew Justice and Mance Warner at GCW Homecoming Part 1. Following their title loss, which came about due to G-Raver’s refusal to work alongside Lloyd, the former challenged the latter to one final match. This match will take place at Grand Sports Arena, “the scene of the crime,” as G-Raver referred to it. At 3 Cups Stuffed, this heated rivalry will, in theory, come to a close. 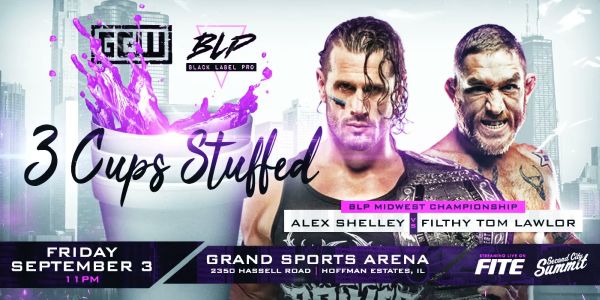 The Midwest Title Is Defended at 3 Cups Stuffed

This past October, Alex Shelley competed in Black Label Pro’s Turbo Graps 16 tournament. On Night One, one of the first-round matches saw then-BLP Midwest Champion Kylie Rae defend her title against Alex Shelley. Though Rae put forth a valiant effort, Shelley locked in the Border City Stretch, becoming the new BLP Midwest titleholder. Though he ended the evening on a high note, his weekend was far from done. The following evening, Shelley bested Ethan Page, EFFY, and “Filthy” Tom Lawlor in a semifinal four-way contest. This put Shelley in the main event final match against fellow finalist Isaias Velazquez. Ultimately, Shelley was victorious, ending the weekend as not only the reigning BLP Midwest Champion but the Turbo Graps 16 winner to boot. Since then, Shelley only had one other title defense, which saw him defeat Anthony Henry at Threat Level Noon.

Since the Turbo Graps 16 tournament, “Filthy” Tom Lawlor found success in his own right. The following December, he competed in, and won, Major League Wrestling‘s Opera Cup 2020. In terms of New Japan Pro-Wrestling, he became a prominent wrestler on NJPW Strong. This past spring, he competed in the New Japan Cup USA 2021 tournament; the winner would also be crowned the first-ever NJPW Strong Openweight Champion. Overcoming up-and-comers Ren Narita and Hikuleo, and finally the imposing Brody King, Lawlor won the tournament and the title; one could argue that, in certain regards, this paralleled Shelley’s success in BLP the year prior. At 3 Cups Stuffed, Shelley makes his first BLP Midwest Championship defense in 2021. With an opponent as confident and lethal as the leader of Team Filthy, the Motor City Machine Gun and former Time Splitter has his work cut out for him. 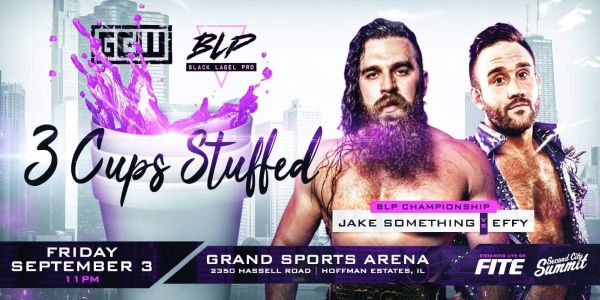 Closing GCW x BLP: 3 Cups Stuffed will be a BLP Heavyweight Championship match. The reigning titleholder, Jake Something, will go one-on-one with GCW fan-favorite EFFY in a first-time encounter. IMPACT Wrestling fans will undoubtedly know who Something is, whether it’s from him teaming with NJPW legend Satoshi Kojima or wrestling in the various X-Division matches he’s been part of. In Black Label Pro, however, he rules the roost as the BLP Heavyweight Champion. Something won the title in August of 2020, going on to defend it multiple times before the year wrapped up. As of last month, he surpassed one year as BLP Heavyweight Champion, becoming the longest-reigning titleholder in the process. At 3 Cups Stuffed, however, his title reign may be in jeopardy.

As stated earlier, EFFY is a fan-favorite wrestler in GCW. From his colorful personality to his sheer willingness to put his body on the line for a victory, “The EFFY Experience” has been nothing short of overpowering. As a result, he’s become one of the most popular wrestlers on the independent scene, which is a reputation that he has accepted with pride. It’s important to note that 3 Cups Stuffed isn’t the first BLP-affiliated show he’s been part of. Last year, he was part of the Turbo Graps 16 tournament, challenged WARHORSE for the IWTV Independent Heavyweight Championship, and even took on Gangrel in an encounter no one saw coming. Can EFFY make his latest BLP showing a success by winning the promotion’s heavyweight title? Suffice to say, Friday will be a big night for the challenger.

Stay tuned to the Last Word on Pro Wrestling for more on this and other stories from around the world of wrestling, as they develop. You can always count on LWOPW to be on top of the major news in the wrestling world, as well as to provide you with analysis, previews, videos, interviews, and editorials on the wrestling world. GCW x BLP: 3 Cups Stuffed is set to air Friday at 12 AM EST on FITE. Tickets are also available via Eventbrite.