New Japan Pro Wrestling (NJPW) will conclude its special batch of shows inside baseball fields as they head inside the MetLife Dome for Wrestle Grand Slam nights one and two. It will be their final massive show ahead of the G1 Climax, meaning that it will be the final opportunity for the roster to gain some momentum heading into the round-robin tournament. NJPW has made sure to pack both nights of Wrestle Grand Slam with must-see matches and will feature Stardom for the first time on both broadcasts as well. Here’s a look at the Wrestle Grand Slam card for night one.

Roppongi 3K is no more. That’s a fact after SHO turned on YOH, signaling that it is time for him to run as a singles star. YOH’s slump since facing El Desperado for the IWGP Junior Heavyweight Championship has been notable and it could be what stops him from getting the necessary payback on SHO that he’s likely hoping for. These two are not going to stop fighting as this first match but seeing that the blood is boiling for both, it could be the most important in terms of where their careers go from here. Expect little technical prowess and more of a war between the former partners in one of the more highly anticipated non-title matches NJPW has had all year. 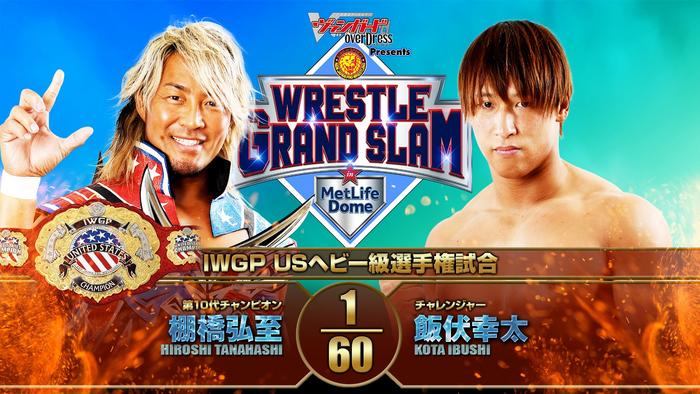 Hiroshi Tanahashi will defend his newly won IWGP United States Heavyweight Championship against his Golden Aces partner, Kota Ibushi. Ibushi has not wrestled since July 2 after getting sick. It forced him to miss the main event of Wrestle Grand Slam, where he would get his rematch for the IWGP World Heavyweight Championship. Tanahashi stepped in for him that night and is now granting Ibushi another chance at gold in what will be the main event of night one. These two have been great whether it’s been against each other or as partners, so this should be another case where they steal the show. Ibushi will have all eyes on him seeing that this is his first match back but “The Golden Star” should be able to show he can live up the being a god once again. Expect something special in this one.