In 2018, World Wrestling Entertainment’s women’s division was in the midst of an evolution, and with three words, Becky Lynch lit the spark of a revolution: “I’m the Man.” The plan was that Lynch’s feud with former best friend Charlotte Flair would lead to a heel turn for her character. What actually occurred was lightning in a bottle: rather than being disgusted at Lynch’s frustrations with Flair, the audience heartily agreed with her and cheered vehemently as she declared herself the top dog of WWE sum total, not just the women’s division. Even “Stone Cold” Steve Austin has compared Becky to himself; both of them out of left field phenoms whose heel characters struck an unplanned, uncanny chord with audiences. Like “Stone Cold,” “The Man” was parlayed from a heel into an edgy babyface. She, Flair, and Ronda Rousey became the first women to headline a WrestleMania at Wrestlemania 35. By that point, Lynch had surpassed Rousey as a sports entertainment performer whose appeal transcended expectations and notions of gender.

That was then. Who is Becky Lynch now, in the eyes of the crowd, and how will they react to her new heel character on SmackDown, as the adversary of the beloved Bianca Belair?

A Look Into the Becky Lynch Heel Turn

2018’s “I’m the Man” Becky Lynch landed because the audience felt that she had a point: perhaps she had missed out on opportunities given to Charlotte Flair. Lynch had a reason to be angry, even with the audience themselves. She was an underdog, a folk hero, a relatable figure. At August 21’s SummerSlam, however, she displayed a new edge of cold cunning. She declared that “The Man” and “The EST” Bianca Belair were going to “blow the roof off” Allegiant Stadium, after dispatching Belair’s scheduled opponent, Carmella. What occurred was not a stellar outing between the once and the former SmackDown Women’s Champion, but a squash that lasted only seconds and saw Belair lose the championship she earned in a history-making match at WrestleMania 37 against Sasha Banks. It was aloof and underhanded, where Lynch’s former appeal rested in ardent candor.

On August 27’s Friday Night SmackDown, Belair challenged Lynch for the SmackDown Women’s Championship. She was interrupted by Carmella, Zelina Vega, and Liv Morgan, and a fray ensued. Lynch seized the opportunity to roll out of harm’s way and set a stipulation match between her prospective challengers, a four-way elimination match for the right to face her. The Becky Lynch of 2018-2020 was born ready for a fight, edgy but earnest. 2021’s SmackDown incarnation seems craftier, with a touch of insecurity about facing Belair one on one in the ring. The North Little Rock, Arizona crowd’s cheers seemed evenly split between them: Lynch is an icon, while Belair’s rise has been no less meteoric than Lynch’s was. 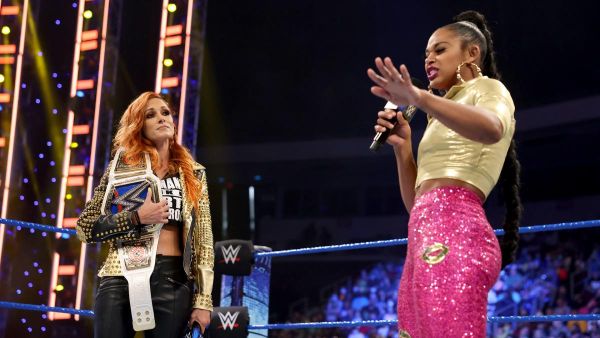 The Argument to Be Made

Introducing new, blatantly heel traits to Becky Lynch might just erode what made it unexpectedly lovable in the first place. Or, perhaps her 16-month absence hasn’t dimmed her luster to her diehard following, and Belair might lose momentum against a Lynch that, in the fans’ eyes, can do no wrong. Belair’s character is almost “kawaii:” she’s a force of nature in the ring, but her image and appeal are in her almost child-like effervescence. Where in her earlier incarnation her aggression seemed justified and empowering, against such an Apollonian opponent Lynch might strike a different note, altogether.

However, crowds at both SummerSlam at Allegiant Stadium and Simmons Bank Arena’s SmackDown broadcast went wild at the prospect of Lynch and Belair tearing down the house. Whatever character-based twists and turns take them there, a match between two of the women’s division’s brightest stars is sure to be a memorable highlight of both women’s groundbreaking careers.