Regarded as one of the greatest wrestlers of all time by many, Bret “Hitman” Hart boasts a legendary career. From his professional debut in 1978 to his retirement from in-ring competition in 2000, “storied” doesn’t even begin to describe his legacy. Rewind to the summer of 1991, however, and it was easy to regard Hart as simply a reliable mid-card talent in the World Wrestling Federation. While technically fluid, many associated with him with tag team competition due to his success alongside Jim “The Anvil” Neidhart as The Hart Foundation. At SummerSlam 1991, however, he achieved singles gold for the first time when he won the WWF Intercontinental Championship.

The Stage for Bret Hart vs. Mr. Perfect, SummerSlam 1991

In 1985, Bret Hart began to team with Jim Neidhart; along with, “The Mouth of the South” Jimmy Hart, the trio officially formed The Hart Foundation. They would become one of the top teams in the World Wrestling Federation, winning the company’s tag team titles on 2 occasions. With that said, by early 1991, it became evident that The Hart Foundation was losing steam. After failing to win back the WWF World Tag Team Championship from The Nasty Boys that July, The Hart Foundation duo went their separate ways.

By this point, “The Hitman” had become a relatively popular star. Though The Hart Foundation started their run as hated heels, over time, fan reception warmed. In due time, they were valiant heroes, waging war against the likes of Demolition, Power and Glory, and The Fabulous Rougeaus. Hart’s status as a fan favorite continued into his singles career, especially on the house show scene as he picked up non-televised victories over The Barbarian, Irwin R. Schyster, and others.

Meanwhile, Curt Hennig, known as Mr. Perfect in the WWF, was deep into his second reign as Intercontinental Champion. Hennig won the title from Kerry Von Erich, The Texas Tornado in the WWF, in November of 1990. From there, Perfect continued to hold the title through the end of the year and into the year after. It was at SummerSlam 1991, on August 26, which was held in the historic Madison Square Garden, that he had arguably his greatest match for the title against the up-and-coming “Hitman.”

The Match at SummerSlam 1991

It’s worth noting that Curt Hennig entered SummerSlam 1991 with a severe back injury. This was sustained at a house show match against The British Bulldog the June prior in New York. From there, he was largely kept away from in-ring competition until SummerSlam. Despite the discomfort he was undoubtedly in, heading into Madison Square Garden, the reigning Intercontinental Champion wrestled. This illustrated tremendous respect for Bret Hart on the part of the champion.

Bret Hart vs. Mr. Perfect at SummerSlam 1991 began slowly, the competitors involved feeling one another out. The pace of the match picked up following a hip toss on Perfect by Hart. The Madison Square Garden crowd was firmly behind “The Hitman.” From there, Hart took Perfect to the mat via multiple headlocks, wearing down the champion. In the early going, “The Excellence of Execution” seemed to have Perfect’s number. Virtually every maneuver Perfect pulled off, Hart had a counter for.

In fact, this prompted Perfect to attempt to leave and take a count-out victory. Hart quickly pulled the champion back in, resuming the action between the ropes. Perfect shifted the match in his favor following an illegal punch to the face, the official none the wiser. It also didn’t help that the whistle-blowing Coach, also known as John Tolos, was supporting Perfect at ringside. Hart would even find himself knocked off the apron, colliding with the barricade, a nearby photographer serving as an unwilling casualty. Simply put, Hart was on the defensive.

Hart remained in the fight, though, which increasingly frustrated the Intercontinental Champion, who even argued with the official. Perfect cinched in a sleeper hold, wearing “The Hitman” down further. Not one to quit so easily, Hart fought out of the hold, though his attempt at a crucifix pin would fail. When the champion hit his patented Perfect Plex, the match appeared to be over. That was, until Hart kicked out at 2, much to the shock of the fans and announcers alike. In the words of Bobby “The Brain” Heenan, “nobody has ever kicked out of the Perfect Plex.”

Down but not out, Hart built a new wave of momentum, evening swinging Perfect with such force that he was crotched on the ring post. Hart followed up by focusing on Perfect’s legs, sizing the champion up for his own finishing maneuver. Coach would attempt to get involved, only to receive a punch to the face by Hart. This gave Perfect the opportunity to cheapshot Hart, targeting the groin. The match eventually reached its conclusion when Hart caught Perfect’s leg, transitioning into the Sharpshooter for the submission victory. After disposing of the now-former Intercontinental Champion, Hart took his title, going into the crowd to celebrate with his parents in attendance, Stu and Helen Hart.

Following SummerSlam 1991, Curt Hennig stepped away from in-ring competition. By that point, he had been working with a broken tailbone and multiple bulged discs in his back. Hennig wouldn’t be seen again on WWF programming until November, when he became the Executive Consultant of “The Nature Boy” Ric Flair. This would kick off Hennig’s second run with the company.

As for Bret Hart, he would remain WWF Intercontinental Champion for 144 days. During this period, Hart defended his title on WWF Superstars, Wrestling Challenge, and other programs. He overcame opponents such as Barry Horowitz, Louie Spicolli, and The Brooklyn Brawler. Ultimately, Hart’s first reign would come to an end at the hands of The Mountie, also known as Jacques Rougeau, in January of 1992 at a house show.

Only three days later, at the Royal Rumble pay-per-view, The Mountie dropped the title to “Rowdy “Roddy Piper. This would lead to one of Roddy Piper’s best matches, an Intercontinental Championship defense against Hart at WrestleMania VIII the following April. It was here where Hart won his second Intercontinental title; this would continue to push him toward his eventual spot as the biggest star in the company. 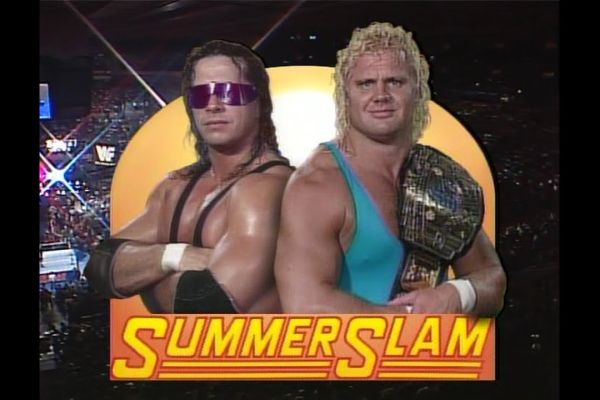 When looking back at the series of Bret Hart matches in World Wrestling Entertainment’s history, the options are seemingly limitless. He was known for being able to adapt to various styles, ranging from the fast-paced approach of The 1-2-3 Kid to the more methodical, strength-based offense of Diesel. However, his match with Hennig at SummerSlam 1991 was an example of two technically sound wrestlers plying their craft on the canvas surrounded by three ropes. They wouldn’t meet in singles competition until a little under two years later; this saw “The Hitman” battle “The Perfect One” in the semifinals of the King of the Ring 1993 tournament. This, however, is a story for another time.