This week’s AEW Dynamite came off the heels of an eventful AEW Rampage the Friday prior. On the latter show, CM Punk made his return to professional wrestling after 7 years of inactivity from the business. “The Second City Saint” announced that he was back for the long haul. Additionally, it was confirmed that he would be competing at All Elite Wrestling’s next pay-per-view event: All Out 2021. Dynamite also saw a wealth of in-ring action ranging from a semifinals tag team match to the son of a legend stepping forward to defend his wounded father. Take a deeper dive with the following AEW Dynamite results and analysis. 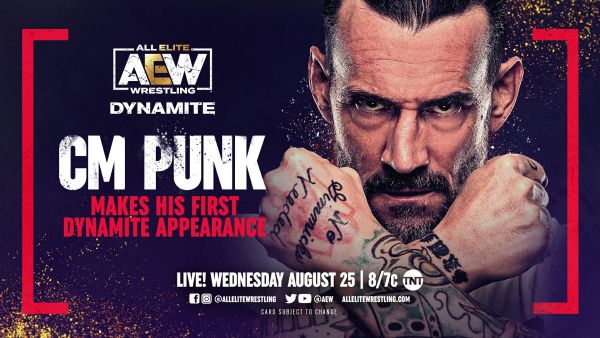 The Factory vs. Gunn Club

Amidst all the in-ring action confirmed for this week’s edition of AEW Dynamite, what had fans talking the most was the first appearance of CM Punk. As stated in his in-ring address on Rampage, he has time. In other words, we can expect to see the self-proclaimed “Best in the World” on Wednesday nights on TNT. Though this week’s show didn’t take place in his home of Chicago – Dynamite emanated from Milwaukee, Wisconsin – the reaction to him was nothing short of welcoming. It’s clear that the professional wrestling world has largely embraced Punk with open arms, even if certain members of the AEW locker room have not. Keep in mind that, at All Out, Punk will go one-on-one with Darby Allin, who the straight edge veteran regarded as a tough wrestler.

Stay tuned to the Last Word on Pro Wrestling for more on this and other stories from around the world of wrestling, as they develop. You can always count on LWOPW to be on top of the major news in the wrestling world, as well as to provide you with analysis, previews, videos, interviews, and editorials on the wrestling world.  You can catch AEW Dynamite Wednesday nights at 8 PM ET on TNT and AEW Dark: Elevation (Monday nights) and AEW: Dark (Tuesday nights) at 7 PM ET on YouTube. AEW’s new show, AEW Rampage, airs on TNT at 10 PM EST every Friday night.