Following the events of Chaotic Countdown and Chaotic Camping, Chaotic Wrestling returns for their biggest event of the summer – Summer Chaos! Here’s what to know heading into the show. 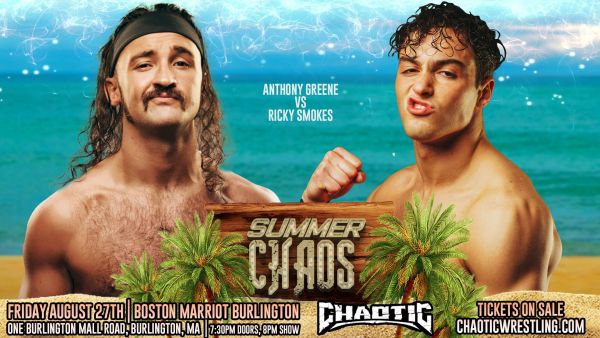 Anthony Greene has been a long-time veteran in Chaotic Wrestling and on Summer Chaos, he is back! Ricky Smokes, however, is not the same wide-eyed rookie that Greene remembers. The former Ricky Archer is now using any means necessary to help him win matches; sometimes, this can work in his favor, and sometimes, it does not. It will certainly be interesting to see what these two come up with as Anthony Greene makes his triumphant return and Ricky Smokes hopes to play spoiler to it. 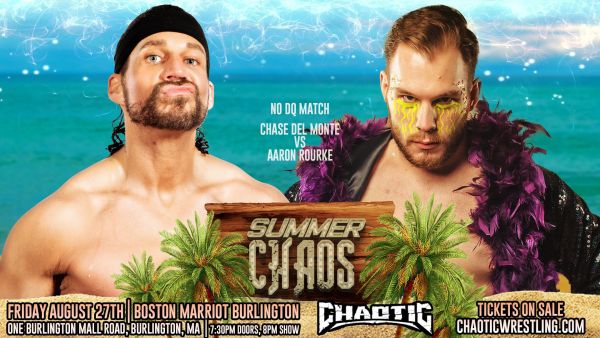 Since taking control of Chaotic Wrestling, Chase Del Monte has not been afraid to take matters into his own hands when a problem arises. You could say that Chase Del Monte is a very hands-on leader and that will be made even more apparent when he takes on Aaron Rourke (who has had some behavior issues) in a No DQ Match. This one could easily get wild and perhaps recent Chaotic Wrestling guest star Tommy Dreamer has given Chase Del Monte a few pointers on how to innovate some violence! 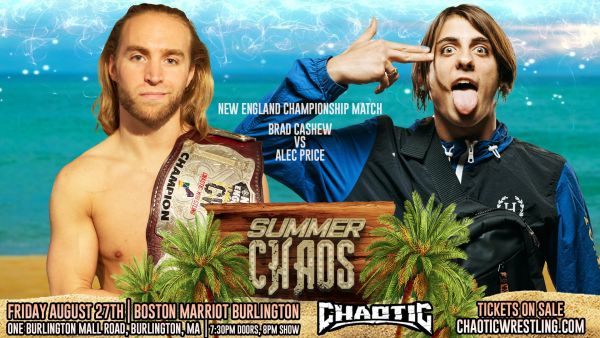 If you’ve ever wanted to see two more evenly matched just scrappy athletes who can defy what is thought of as physics, you’re in for a treat with this match. The pure, natural ability to pull off wrestling maneuvers that others simply cannot combined with that just flat-out brawling to win a match is an appropriate way to describe both Brad Cashew and Alec Price. Cashew is going to do what he has to do to retain the CW New England title. However, Price is going to scratch and claw until he gets it. 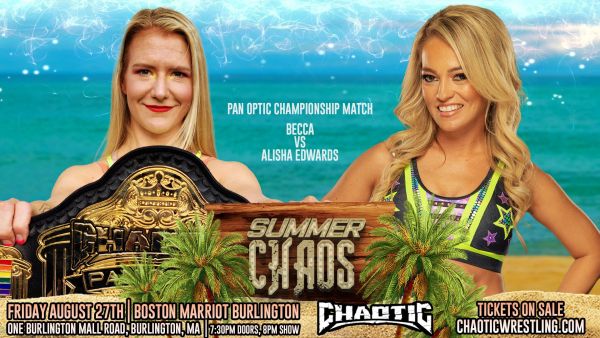 Becca has successfully defended the new CW Pan Optic Championship thus far (a title which has replaced the CW Women’s Championship) and she just might get her toughest opponent to date in one Alisha Edwards. Becca and Edwards are no strangers to each other; if they have something in common, it’s that they both tend to be overlooked and underestimated. This match could rightfully prove why both Becca and Alisha Edwards belong in there with the best. 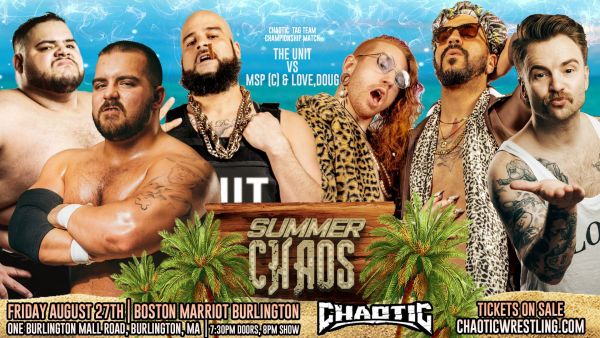 Hopefully, this match will be enough to keep The Unit at bay later on in the night when their leader – JT Dunn – defends the CW Heavyweight Championship against Davienne. One aspect never explained about this match is the fact that MSP are the current CW Tag Team Champions. However, should Love, Doug happen to pin Danny Miles, do they follow the Freebird rule? Either way, following an insane TLC Match at Chaotic Countdown back in July, this match only promises carnage and mayhem. It’s going to be wrestling at its finest. 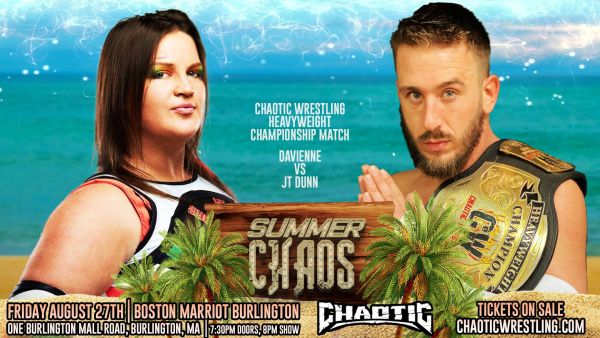 This CW Championship Match has perhaps the most implications of any match in the history of Chaotic Wrestling. On February 7, 2020, Davienne & JT Dunn defeated Killanova Inc. to become the new CW Tag Team Champions. Almost a year later, on January 27, 2021, Team Death By Davie lost those tag belts to MSP. From there, the friendship and the respect between JT Dunn and Davienne would drastically change for the worse.

During their feud, Davienne would make her way to a title shot against JT Dunn, after he made his own way to becoming the CW Heavyweight Champion. Davienne lost that match on June 10, 2021. However, on July 16, 2021, in front of a capacity crowd in Lowell, Massachusetts, Davienne won the Chaotic Countdown match, granting her a title opportunity, another shot at the belt currently held by JT Dunn.

If you were a gambling fan, odds would be on favorite for Davienne to win this match and the title. After their storied past, winning the Chaotic Countdown match – outlasting all of those other competitors – just proves that Davienne has it in her. So long as there are no outside distractions (help from The Unit), this night will end with a new champion being crowned.