GLEAT is riding a huge wave of momentum coming off of their big show at Tokyo Dome City Hall. Now they look to add to that with the first formal event for the G PROWRESTLING brand on their own: GLEAT G PROWRESTLNG Ver.1. While it’s not the main event, this show is built around the singles match between Kaz Hayashi and Issei Onitsuka. This match was scheduled after Issei scored his first win in GLEAT over Kaz. However, the rest of the card still can pose as building blocks for GLEAT’s future. 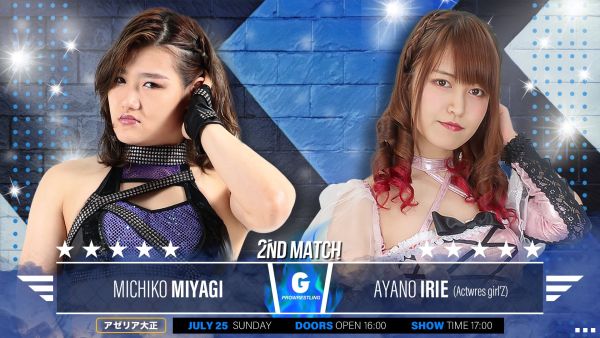 Michiko Miyagi is the first and only female signing to GLEAT at this moment. However, things haven’t quite gone her way, as she hasn’t quite been able to stand alongside others as one of the faces of GLEAT. She won her debut match, which was also where she seemingly confirmed her GLEAT signing. However, when her big singles match at Tokyo Dome City Hall came, the result, unfortunately, was not the same.

Miyagi expressed her displeasure with the outcome, even clamoring for a singles match with Chihiro Hashimoto. With that in the rearview mirror, Miyagi can look toward the future. Her next singles match is with Ayano Irie of Actwres girl’Z. Miyagi worked quite a lot for Actwres girl’Z before coming aboard GLEAT. Thus, the two will have some familiarity with one another heading into the contest. Will Miyagi be able to bounce back with a singles win, or will she continue her slump?

As mentioned this was the big selling point for the show. Building up the singles match between Issei Onitsuka and Kaz Hayashi. Onitsuka got his first win over Hayashi, but that was in a tag match setting. Hayashi will not take that loss sitting down. Instead, he is going to be looking to avenge that loss in this bout. Onitsuka seemingly looked ahead of Hayashi, as he recently competed alongside El Lindaman for the AJPW All Asia Tag Team Championship, filling in for an injured T-Hawk. Although it was in a losing effort, it seemed like Hayashi was solely focused on that match.

Hayashi has kept a rather clear schedule, training hard for this singles encounter. Onitsuka has to remember that while he scored the pinfall in a tag match, it does not put him ahead of Hayashi quite yet. Hayashi is a junior heavyweight legend and well-traveled veteran. Onitsuka has to be on his A-game if he is to walk away with the win. Will the power slide to STRONGHEARTS or the GLEAT main unit after this match? 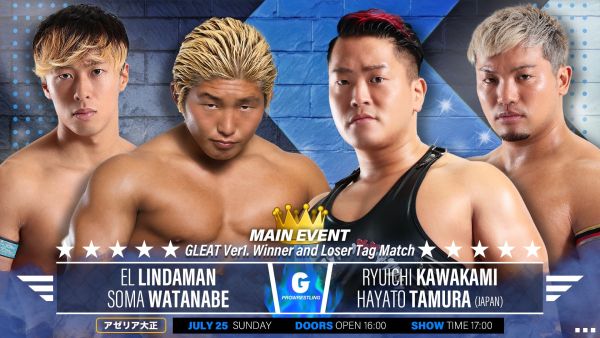 The main event of GLEAT G PROWRESTLNG Ver.1 is a special tag team match. A loser and a winner from GLEAT Ver.1 will be paired up on each side to do battle. One would have to imagine it would be T-Hawk teaming with El Lindaman had the former not been hurt. However, that doesn’t mean the match that is going down is any less important. El Lindaman and Soma Watanabe are often on the opposite sides of the GLEAT ring, so it’ll be fun to see them pair off. The same can be said for the heavy-hitting team of Ryuichi Kawakami and Hayato Tamura.

This should be a good match, but one has to believe there is more to this match. Something is going to come out of this one, so it would be best to keep a close eye on this affair. It’ll be interesting to see who escapes with the win at GLEAT G PROWRESTLING.

Stay tuned to the Last Word on Pro Wrestling for more on this and other stories from around the world of wrestling, as they develop. You can always count on LWOPW to be on top of the major news in the wrestling world, as well as to provide you with analysis, previews, videos, interviews, and editorials on the wrestling world. You can watch GLEAT on their YouTube channel.