June 29’s episode of NXT built on the aftermath of the recent event NXT TakeOver: In Your House, in which NXT champion Karrion Kross retained his title in a fatal five-way against Johnny Gargano, Pete Dunne, Adam Cole, and Kyle O’Reilly. While O’Reilly and Cole have their hands full with their rivalry, Gargano took his loss to Kross personally and answered with a backstage run-in. Kross called him out in the ring, attempted to attack Gargano with the steel steps. However, he was held back by security led by management’s enforcer, Samoa Joe. Gargano and his young ward Austin Theory managed to double team Kross, all of these theatrics setting up a feud between Gargano and Kross, with some seething animosity between Kross and Samoa Joe for good measure.

While it’s an all-around intriguing direction for all involved, just how much longer will Karrion Kross remain on the black and gold roster? The two-time NXT Champion has stated in the past that his move to the main roster was a matter of when, not if, unlike professed NXT lifer Gargano. Technically, his move to the main stage happened, tentatively, on June 23’s installment of WWE Main Event. Kross’s valet Scarlett was noticeably absent, meaning Main Event viewers didn’t get to see their customary smoke-wreathed, lip-syncing NXT entrance. However, Kross had an evenly matched bout with Shelton Benjamin, scoring a victory against the former Hurt Business affiliate via submission by locking in his ‘Kross Jacket’ finisher. 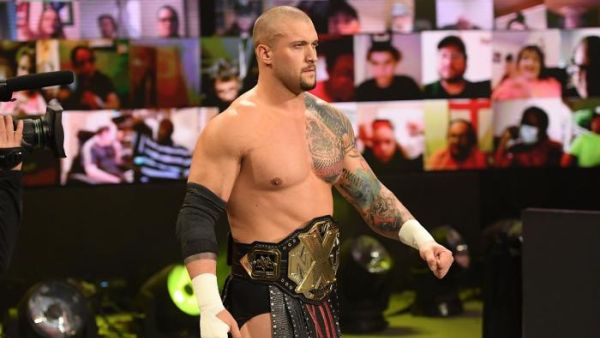 The Initial Steps of Karrion Kross

Although this was Kross’s first appearance in the Thunderdome, it wasn’t the first indication that he and Scarlett are both close to a main roster debut. Although presumably, such a move would happen initially on Monday Night Raw, they have both been working dark matches for WWE officials before tapings of Friday Night SmackDown in recent weeks. Before June 25’s SmackDown, Kross wrestled Slapjack, formerly of RETRIBUTION, while Scarlett took on fellow NXT talent Shotzi Blackheart. The week before that, Kross had a dark match against Dolph Ziggler, while former NXT North American Champion Bronson Reed also appeared on Main Event earlier this month.

If Kross and Scarlett are ‘moving on up,’ it appears that it would be a return to the ring for Scarlett. Although she has been a fascinating and popular figure as Kross’s valet, a darkly glamorous presence who seems to predict his opponent’s fates with her Tarot cards, and an integral part of his entrance, Scarlett is an accomplished pro-wrestler in her own right, a veteran of CHIKARA, Ohio Valley Wrestling, Ring of Honor, IMPACT Wrestlinb, and AAA. She is also no stranger to the WWE, having first appeared on NXT as one of party boy Adam Rose’s ringside Rosebuds, and a one-off appearance on Raw in a match against Nia Jax.

The Development of Style

As for Karrion Kross, he is at the height of his powers in his second reign as NXT Champion. Kross’s persona is that of both brute force and Byronic mystery, housed in an imposing mesomorphic physique. His in-ring style is one of raw power, with Kross utilizing an encyclopedia of suplex variations on his opponents. However, as proved upon Benjamin, he is also capable of scoring a win via submission. Kross honed his abilities in various promotions over the last decade, appearing, like Scarlett, in the lucha libre outfit AAA, as well as the groundbreaking lucha libre program with heavily scripted and cinematic elements Lucha Underground as The White Rabbit.

Kross also appeared in IMPACT and Global Force Wrestling, and his last stop before becoming part of the WWE roster was Major League Wrestling, before signing with NXT in February 2020. He quickly captured the NXT title from Keith Lee, but vacated it days later due to a shoulder injury. Kross returned months later and hit the ground running in a feud with then-champion Finn Balor, reclaiming the gold from Balor at NXT Takeover: Stand and Deliver. Kross has dominated all challengers, and with Scarlett by his side, his presence is not just formidable but tinged with a subtle air of the supernatural. 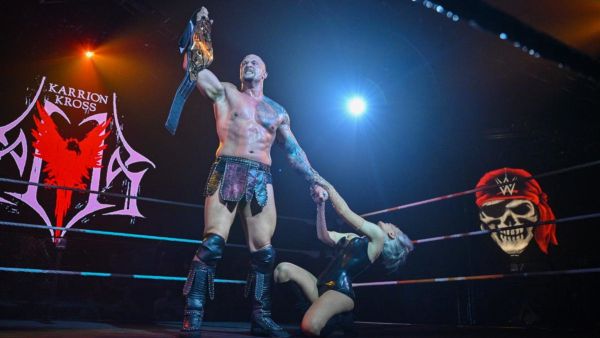 Karrion Kross and Scarlett on the Main Roster

How will they translate to the main roster? If his Main Event showing is any indication, Karrion Kross as a main stage player might be ditching the smoky entrance, and Scarlett as a valet, as she returns to the ring. The women’s division could use her experience and star power. She has been an asset to Kross’s popularity and could be a breakout star on her own as well.

While the upcoming drafts on Raw and SmackDown make it difficult to envision what role they would play on either flagship brand, there are plenty of intriguing possibilities:

Drew McIntyre has evolved rapidly between 2019 and 2020, from vicious heel to a valiant babyface who captured the WWE Championship twice in 2020. However, his storyline has hit a slump, stymied by repetitive failed title shots that make McIntyre seem a bit petulant as he constantly seeks, and doesn’t capture, the belt. A feud with Karrion Kross would give McIntyre a gritty new opponent, and cast him back in the role he played in his 2020 feud with Randy Orton: the hero with heart, fighting a dark menace. McIntyre is slightly more versatile than Kross, enough so that defeating “The Scottish Warrior” would be Kross’s proving ground to a wider audience.

Riddle’s character vacillates from an affable burnout in the Spicoli mold, to a beast in the ring who puts up a hard and versatile fight, relishing staying alive against established and accomplished opponents like Sheamus, AJ Styles, MVP, and Bobby Lashley. There’s a giant killer in Riddle’s heart, and still a whiff of savage intensity about the former UFC fighter, who houses the thrill of the committed pugilist beneath his happy-go-lucky exterior. Kross, whose brand is belligerence and whose powerlifting style is the opposite of Riddle’s, may be the man to bring the aggression to the forefront in Riddle, in matches that are sure to be classic.

Alexa Bliss’s supernatural machinations have gone unchallenged through most of 2021, as she terrorizes victims like Orton and Shayna Baszler with her demonic doll and telekinetic firebombs. However, the implied-clairvoyant Scarlett could very well predict that Bliss’s time is up with her ubiquitous Tarot. Bliss is returning slowly to in-ring action, and Scarlett could be her foe in a feud for who rules Alexa’s Playground.

Time will tell how Rhea Ripley’s main roster tenure will be defined. Any potential to capitalize on her past encounters with Charlotte Flair for a storyline that cements Flair’s latest heel turn, and introduces Ripley to Raw audiences in a meaningful way, have been wasted. Becky Lynch challenging Ripley for the title she vacated, the Raw Women’s Championship, would be a treat and is probably inevitable. However, it would be intriguing if these two NXT standouts, Scarlett and Ripley, could have their turn in the ring, as well.

While their latest foes are Samoa Joe and Johnny Gargano, recent events suggest that Kross and Scarlett may be soon inhabiting the wider WWE Universe, taking on new opponents.