The first two days of the One of a Kind Tag League are in the books. Though the tag league in question is only four matches deep thus far, the ChocoPro faithful has seen a number of high-quality bouts, pitting various teams against one another under the Gatoh Move Pro Wrestling umbrella. ChocoPro #129 marks Day Three of the One of a Kind Tag League. For certain duos, these matches will be critical in how they progress moving forward. Here is what viewers, both long-time and new, should know before the show goes live on the official Gatoh Move YouTube channel. 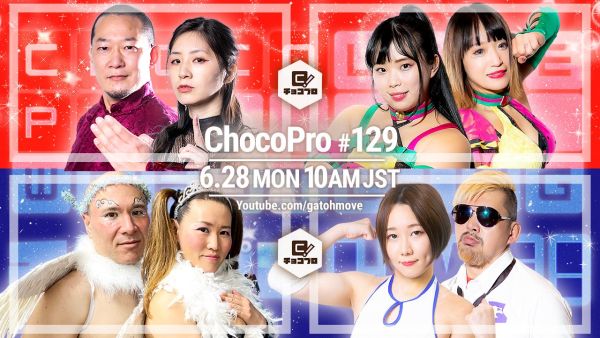 One of a Kind Tag League Block A Match: Dragon Ninja (Sayuri and Chon Shiryu) vs. TropiKawild (Yuna Mizumori and SAKI)

TropiKawild will enter their second One of a Kind Tag League match with a purpose. On episode #127 of ChocoPro, they battled the current Asia Dream Tag Team Champions, Best Bros. This was a competitive encounter, to say the least, featuring the reigning titleholders against multi-time tag team champions. Their contest went to a 20-minute draw, each team receiving 1 point. TropiKawild didn’t receive the full 2 points for a victory, which may put their standing in Block A in jeopardy. In their efforts to win Block A, as well as the tag league itself, the colorful, formidable team of Yuna Mizumori and SAKI will compete at that much higher of a level.

Speaking of entering the tag league with a purpose, Dragon Ninja has just as much of a reason to win, if not more so. On the previous episode, they made their One of a Kind Tag League debut, taking on Best Bros. Despite a spirited effort, the team of Sayuri and Chon Shiryu fell short. One shouldn’t count the illusionary, disciplined duo out, however. Sayuri’s devotion to the way of the ninja is nothing short of solid; meanwhile, Shiryu’s kung fu expertise provides Dragon Ninja with that much more of an edge. A victory will be critical for Dragon Ninja, and given the legitimacy of TropiKawild, Sayuri and Shiryu will have to be at the top of their game.

One of a Kind Tag League Block B Match: White Comaneci (Tokiko Kirihara and Antonio Honda) vs. Mi✰Sayaka (Minoru Fujita and Sayaka)

Are White Comaneci reformed angels or simply wolves in sheep clothing? On the previous episode of ChocoPro, making their One of a Kind Tag League debut, they showed that they may be somewhere in between. Whether singing and playing guitar or taking their opponents – Egg Tart, in the case of the aforementioned episode – to the limit, White Comaneci are nothing short of formidable. Nonetheless, they are entering ChocoPro #129 with a loss on their record. It is still early in the tag league, of course, which means that they can still rebound. To do so, they will have to overcome a duo that few know what to expect from.

Making their first appearance in the One of a Kind Tag League is Sayaka and the current Super Asia Champion, Minoru Fujita. “The Beautiful Cosplayer” of Gatoh Move, Sayaka, is one of the few in the promotion without a solid tag team partner. Though she has teamed with multiple ChocoPro stars in the past, she isn’t part of a dedicated team. Meanwhile, with Fujita being a member of Pencil Army, one would have anticipated he’d enter the tag league alongside Emi Sakura or the group’s young leader, Lulu Pencil. Mi✰Sayaka may seem like a thrown-together tandem, but if they can pull off a victory against White Comaneci, they will effectively put the rest of Block B on notice.