June 18’s broadcast of Friday Night SmackDown was a palate priming amuse bouche for Sunday, June 20’s Hell in a Cell pay-per-view event. After Roman Reigns’s violent attack on Dominic Mysterio during his and father Rey Mysterio’s match for the SmackDown Tag Team titles against The Usos, Rey challenged Reigns to pay for his savagery in a Hell in a Cell Match. Rey’s social media posts throughout the ensuing week played up his agitation to seek retribution on Reigns, and in the hours leading up to the broadcast, it was revealed that the father’s thirst for vengeance could not wait until Sunday’s pay-per-view event. “The King of Mystery” wanted the match, inside the cell, for the Universal Championship, on Friday Night SmackDown. 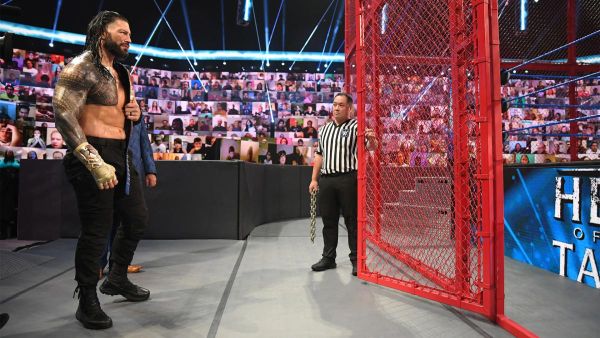 Roman Reigns vs. Rey Mysterio – Hell in a Cell

Anticipation built throughout the broadcast as the red cage descended lower and lower whilst the show went on. When the main event commenced, Rey Mysterio came out on the offensive, hitting Roman Reigns hard with the various props at his disposal inside the red cell. He used tables, chairs, and a heavy iron tool chest against Reigns. In the opening minutes of the match, the Universal Champion seemed hesitant to hurt the legendary luchador. However, the Tribal Chief’s mercy only extended so far, and he tapped into his formidable ferocity to lock Mysterio into a standing, side variation of the guillotine for a win via submission. He locked it in again after the sounding of the bell just for a show of dominance and went on a verbal tirade of vitriol at Mysterio… But made sure to include a “Happy Father’s Day” tiding as well.

Special counsel Paul Heyman entered the ring to hold up Reigns’s hand in victory, but so did a surprise addition to the proceedings: Reigns’s cousin Jimmy Uso joined him in victory as well, in a move that could be seen as Jimmy’s acknowledgment of his cousin as the head of their family. It seemingly brings the recent tension between Jimmy, who wants brother Jey to focus on their path to the tag team titles, and Reigns, who has utilized Jey as his enforcer for the past year, to a close, and also closes the circle on the last time they were in a red cell together.

Hell in a Cell, One Year Earlier – Roman Reigns vs. Jey Uso

At 2020’s Hell in a Cell event, Jey just wouldn’t say die in his and Roman’s “I Quit” Match, so Reigns tapped into some emotional blackmail and also tapped out Jey’s twin, Jimmy, to force his cousin’s compliance. It has been a bone of contention with Reigns and Jimmy since the latter’s return. The match ended with Reigns retaining his belt, and yet another twist in the Tribal Chief storyline: is Jimmy really all in with cousin or is there a double-cross around the corner?

Aside from the excellent character work of all parties involved, and the engrossing in-ring psychology utilized by Roman Reigns and Rey Mysterio, the match was a first in many ways. It was Mysterio’s first Hell in a Cell match, though he has been with World Wrestling Entertainment since 2002. Also, it was the first Hell in a Cell match staged and broadcast on Friday Night Smackdown. The fact that the pay-per-view worthy match aired on the blue brand rather than Monday Night Raw, the traditional home for WWE’s edgiest content and hottest main roster stars, could represent an unspoken anointing of the Fox show over the troubled three hour USA production as WWE’s “A” show.  The match also joins some notable Hell in a Cell firsts. 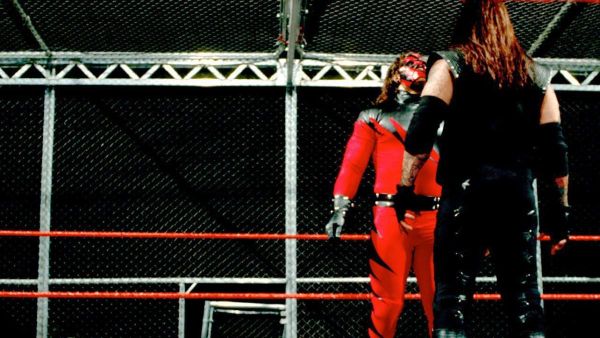 Shane Michaels vs. The Undertaker

The vicious bout between The Undertaker and “The Heartbreak Kid” Shawn Michaels was not quite the first of its kind in the history of pro wrestling, but it was the first Word Wrestling Federation match to feature the steel cage model with an enclosed roof and padlocked door. The modification makes for a more psychologically intense enclosure. The match itself was a stand-out. It was Glenn Jacobs’s first appearance as Kane, The Undertaker’s half-brother, which would go on to become one of the defining characters of the Attitude Era.

The match also changed pro wrestling history in an unforeseen way. The October 1997 Badd Blood: In Your House bout between Michaels and The Undertaker was to decide who would challenge then-WWF Champion Bret Hart for his title at Survivor Series that November. Michaels was the chosen victor of the inaugural Hell in a Cell Match, winning the Survivor Series opportunity, and faced the Hitman at Survivor Series ’97 in Montreal, Quebec, Canada. The rest is history.

The violence was yet another of Foley’s carefully designed operas of bloodshed, and famously did not stop even after The Undertaker threw Foley from the top of the wire structure. The WWE had largely moved away from such decadent, hardcore extremes by the time Undertaker faced CM Punk. Punk lost his World Heavyweight Championship title to The Undertaker, in the man from Death Valley’s second home: the locked cage.

By 2016, fans had been clamoring for a year for the WWE to #GiveDivasAChance. The audience wanted more out of a WWE women’s division and took to Twitter to vent their frustration about it after a 30-second match on Monday Night Raw featuring Paige, Emma, and The Bella Twins in 2015. Restructuring was in order and began in earnest in 2016 with game-changing events like the first women’s match inside the Hell in a Cell structure, which was also the first women’s match to headline the card of a major WWE pay-per-view.

The combatants were Charlotte Flair and Sasha Banks, who also competed against each other in the first women’s Iron Man Match. They battled it out in the red cage, for the Raw Women’s Championship at TD Garden, hometown turf for Banks, who grew up mostly in Boston. Banks lost the match to Flair. However, “The Boss” found herself back in the cage three years later in another Hell in a Cell match against Becky Lynch for the Raw Women’s Championship. Once again, Banks lost.

As a first for SmackDown, and a first for Rey Mysterio, the successful title defense by Roman Reigns has joined these and other stand-out matches in the annals of Hell in a Cell history.