At the start of 2016, World Wrestling Entertainment brought back the Brand Extension once again separating the WWE superstars into two brands, Raw and SmackDown Live.

Prior to this, SmackDown hadn’t really had its own edge and personality since 2011, as WWE decided to make Raw “Supershow” incorporating Smackdown branded stars into the show, therefore leaving the Brand Extension obsolete.

After WrestleMania 32, with a roster size increasing due to the hype of NXT call ups of Neville, Sami Zayn, and Kevin Owens, the acquisition of talent like AJ Styles and the Good Brothers of Karl Anderson and Luke Gallows, plus the returns of Chris Jericho, John Cena, and Seth Rollins later in the year, the main event picture for the WWE Championship was very loaded, so at the time the draft was needed.

At first Smackdown Live seemed to have a disadvantage due to the uneven roster sizes with Raw being three hours and Smackdown being two and the Cruiserweight division being selected to showcase on Raw. Smackdown had an uphill battle to face, but the centerpiece of their plans had the one thing that mattered and that’s then-WWE Champion, Dean Ambrose. Let’s look back on Smackdown Live, in part one of our series looking back at five years of Smackdown Live.

July 2016 to WrestleMania 33: The Rise of Smackdown Live

Starting at Battleground 2016, WWE’s best pay per view of that year, Ambrose defeated former Shield mates and Raw counterparts Seth Rollins and Roman Reigns in a triple threat match for the title.

After SummerSlam, the tides started to turn for the Blue Brand as Smackdown Live had hosted that year’s Backlash. With two new championships being debuted. The team of Heath Slater and Rhyno in a feel-good story would win the tag titles.

AJ Styles would continue his rise on the main roster winning his first WWE Championship against Dean Ambrose, a title he would hold until Royal Rumble 2017.

SmackDown would also continue to showcase the mid-card a bit more consistently compared to its Red Brand counterpart.

Then-Intercontinental Champion, The Miz would re-establish himself as one of the best acts in WWE due to his infamous Talking Smack promo versus then-General Manager Daniel Bryan. Plus the rivalry between him and Dolph Ziggler maintained much-needed intrigue for the title that was the clear match of the night at No Mercy of that year.

The Bray Wyatt/Randy Orton rivalry seeds were planted at this time as the long-term booking would establish this rivalry as one of the key rivalries and storylines throughout the rest of the 2016-17 WWE Schedule. Even James Ellsworth would be a key component of SmackDown programming turning an enhancement talent into a prominent figure.

Fast forward to Survivor Series 2016, a show that was built on the back of fantasy warfare and the booking of the Men’s Survivor Series match between Raw Superstars, then-Universal Champion, Kevin Owens, then-United States Champion, Roman Reigns, Chris Jericho, Seth Rollins and Braun Strowman versus then-WWE Champion AJ Styles, Dean Ambrose, Randy Orton, Bray Wyatt, and Shane McMahon. In 52 minutes of great action, Smackdown was survived by Randy Orton and Bray Wyatt establishing themselves as the brand of dominance, despite the tag team, Cruiserweight, and women’s matches not going in their favor. Raw may have technically won the night 3-2 (adding the Sami Zayn vs Miz match) but Smackdown won the fans over.

Show after show, Smackdown would continue to make do with what they had. New champions were crowned with Alexa Bliss and Naomi getting themselves in the spotlight for the Women’s division. American Alpha would establish themselves as a team of the future and the booking of the WWE Championship remained a bright spot.

With SmackDown Live only having one match on the 2017 Royal Rumble Card with Raw’s Women’s, Cruiserweight and Universal Title matches filling out the main card alongside the Rumble match. John Cena and AJ Styles’ third match would easily be the best match of the calendar year in a near 5-star affair with the two poster children of the last decade, completely stealing the show. 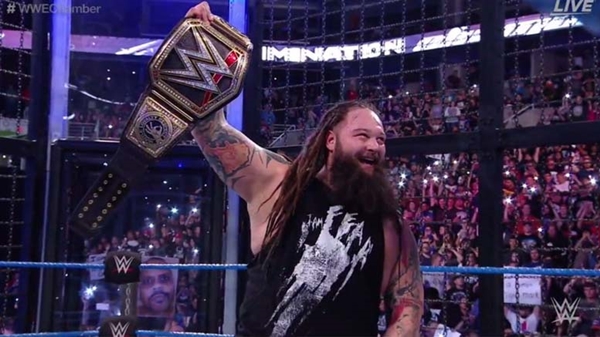 Then came Elimination Chamber. Alongside, Backlash 2016, this was the best-booked show that made clear the future of the brand. Orton’s sleeper match with the late-Luke Harper was an underrated gem of a match of that entire year, which set up Orton’s WrestleMania plans. Three women’s matches showcased the best of the Smackdown Live Women’s division with James/Bliss, Natalya/Nikki Bella, and Bliss/Naomi all taking place on this show. The night was capped off by one of the best Elimination Chamber matches in recent memory (which would be surpassed by the WWE Title Chamber in 2019) that effectively set up matches for the following WrestleMania event in Orlando.

Bray’s 1st WWE Championship win put him over as a credible threat by effectively eliminating the last two WWE Champions in John Cena and AJ Styles and would set up him versus Orton for the title. Dean Ambrose’s feud with Baron Corbin would be set up for their Intercontinental Championship at WrestleMania. Cena and The Miz would reignite their feud against each other with their respected spouses (then-spouse in Cena’s case) and Styles’ chase for the WWE Title would end up getting the best of him as the “Phenomenal One” would feud with Commissioner S. McMahon.

At the start of the Draft, Raw appeared to have a clear advantage, but with the booking, the relaxed and neutral approach from the “authority figures” and the stars that overachieved and then some, the first era of SmackDown Live was a true shock to the system that reinvigorated SmackDown.