The second day of SEAdLINNNG’s Shinkiba Night double header kicks off on June 17th at Shinkiba 1stRING with a four-match card. The tag champions defend their title for the first time and a number one contender for the Beyond the Sea title will be crowned on Shinkiba Night two! 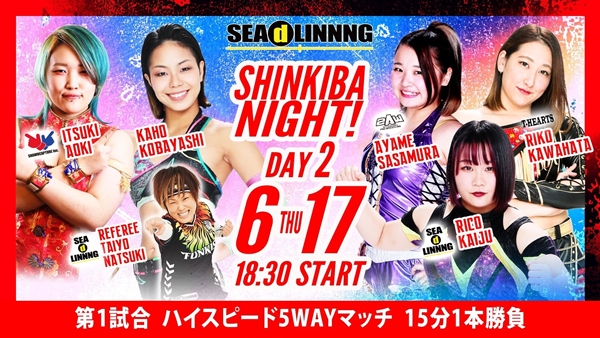 It wouldn’t be a SEAdLINNNG show without a high speed rules match. Kaho might be one of the fastest in this match which will make her one to look out for as her lucha style adopted from her time in Mexico makes an exciting contrast with the rest of the group. Aoki is known to be quite the chaotic character in SEAd, however, her wild attitude seems to get her in trouble especially when she is being just a little bit too loud. The big rookie Riko Kaiju has been a bit busy squaring up to Yumiko Hotta which for the development of her as a wrestler has been working out, working on her power is a great skill to have in a match like this. Sasamura and Kawahata have only wrestled a handful of matches in SEAd so far but they have been a great addition to the roster as outsiders adding a little more depth to the promotion. This is certain to be a fun match no matter who picks up the victory. 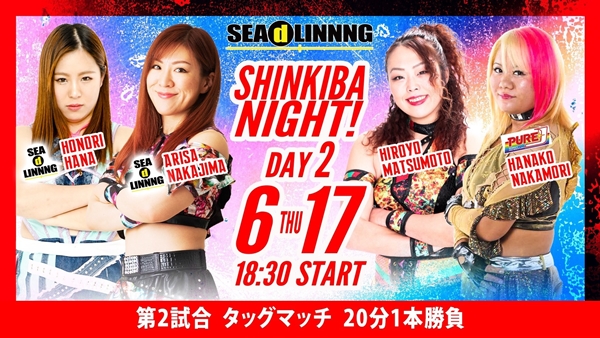 Honori switches partners in this one from Kawahata to the more senior Citrus Wind teammate Arisa Nakajima. Arisa recently lost her Beyond the Sea tag team title but there’s not much that can hold down the veteran for too long, especially when she is having such high calibre matches in SEAd. They will be taking on a strong veteran team of Hiroyo and Hanako. Although they rarely appear in SEAd these days, they are two women that are highly respected in the business and have positioned themselves as some of the most skilled freelancers that immediately elevate whatever match they’re in. 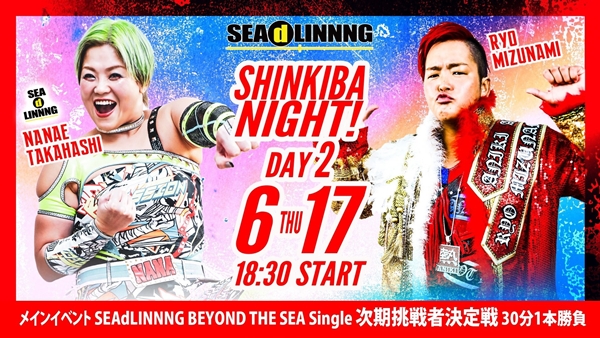 Ryo Mizunami is coming in hot after her run in AEW where she won the AEW Women’s Eliminator Tournament. Upon her return, she confirmed that she will be in Japan for an extended amount of time before returning to AEW in the future which means that we will get even more of Ryo in the promotion which of course is a good thing. Her opponent Nanae took down Las Egos at Shinkiba Night 1 the day before which puts emphasis on how strong of a competitor she is in the company. The winner of this match will go on to challenge ASUKA for their Beyond the Sea championship at a future show, so no matter who picks up the victory in this, it will make for a match of the year worthy title match. 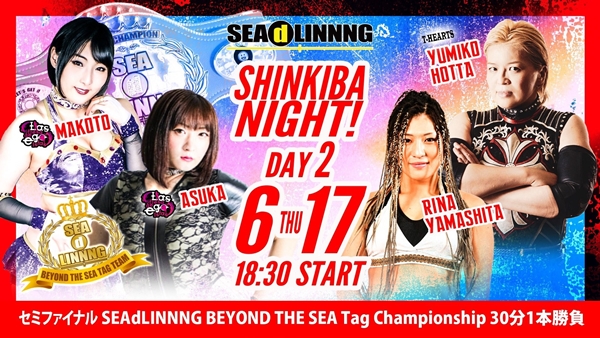 On the night before this match, Las Egos fell to Citrus Wind in the captains fall match but the champions need to pick themselves back up to take on the tough team of Yumiko Hotta and Rina Yamashita. ASUKA and Makoto have been putting on some incredible tag matches since they united and they have arguably been one of the best parts of every SEAdLINNNG show. Even though Hotta has been wrestling for over 30 years, she is still one to be feared with her stiff strikes. Pair that with Rina Yamashita and her mix of size, strength and speed and you make one deadly combination for a first defence. When ASUKA and Rina faced off for the singles title it was truly spectacular, anytime these two get into the ring together their styles just mix perfectly. Since this is the first defence for ASUKA and Makoto, it will be important for them to win, especially with ASUKA’s Beyond the Sea singles title defence coming soon.