This Sunday, the National Wrestling Alliance will hold its second-ever pay-per-view event since the promotion’s return this match. NWA When Our Shadows Fall will emanate from the classic GPB Studios and air exclusively on FITE. There is plenty of action to see and experience, including an NWA Worlds Heavyweight Championship match months in the making. For those that may be curious about tuning in on Sunday, here is a rundown of what to expect.

The Women Set to Shine at NWA When Our Shadows Fall

Among the action set for NWA When Our Shadows Fall are two women’s matches. The first is a tag team match, which will see Melina and former NWA World Women’s Champion Thunder Rosa join forces. Over the past few weeks, the two have become allies, despite being at odds with each other in the past. On the other side of the ring will stand Taryn Terrell, who has formed something of an alliance with the current number one contender, Kamille. However, with the blonde powerhouse of Strictly Business in action later in the show, Terrell found a partner in an interesting place.

Enter Kylie Rae, who will be making her National Wrestling Alliance debut at When Our Shadows Fall. This past November, the “Smiley” one retired from professional wrestling entirely. However, this upcoming match, as well as her recent work for Warrior Wrestling, IMPACT Wrestling, and other organizations would indicate a slow return to the fold. As stated earlier, Rae has yet to wrestle a match for the NWA. Furthermore, her positive demeanor makes her an interesting contrast to Terrell, who she’ll be teaming with this Sunday. 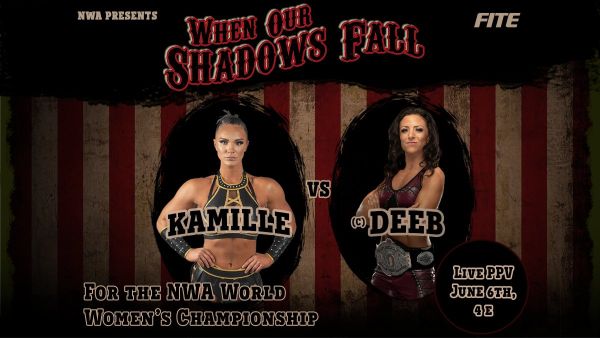 The second women’s match of When Our Shadows Fall will see the World Women’s Championship on the line.

Making her in-ring debut for the National Wrestling Alliance, ironically enough, is the NWA World Women’s Champion herself, Serena Deeb. Her most recent title match took place last week at AEW Double or Nothing. During the Buy-In, Deeb successfully retained her title against Riho in what many fans considered one of the best bouts of the night. Deeb has also made multiple AEW appearances leading to this. However, it may surprise fans to know that she has yet to step foot in an NWA ring. In her debut match for the company, she will defend her title against perhaps her greatest challenge to date.

Kamille’s reputation as the powerhouse women’s wrestler of the NWA can’t be denied. Since the company’s recent revival earlier this year, she has been on a tear, solidifying her spot as the current number one contender for the NWA World Women’s Championship. She would even defend her spot in a recent bout against Thunder Rosa, which ended in a no-contest. Nonetheless, Kamille is set to challenge Deeb for the gold at NWA When Our Shadows Fall. Will this match see the challenger win her first NWA World Women’s Title or will Deeb’s reign as champion continue? 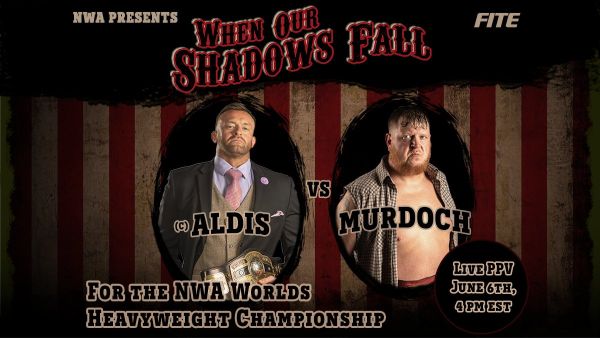 Trevor Murdoch Receives the Opportunity of a Lifetime

The main event of NWA When Our Shadows Fall dates back to March. At the company’s return event, NWA Back For The Attack, Trevor Murdoch successfully retained the NWA National Championship against Chris Adonis. Following his victory, Murdoch was attacked by Adonis. On the same night, the now 900-plus-day NWA Worlds Heavyweight Title reign of Nick Aldis continued when he bested Aron Stevens in the main event. While this was a night of celebration, as well as a platform to usher in a new era for the National Wrestling Alliance, it wouldn’t be long until Murdoch found himself in the crosshairs of Strictly Business.

On the March 30 episode of NWA Powerrr, Murdoch interrupted an interview segment with Aldis. The National Champion addressed Adonis, looking for retribution from Back For The Attack. Aldis didn’t take kindly to Murdoch’s interruption, telling him to never take his eyes off an opponent. Suddenly, Murdoch was attacked from behind by Adonis. The attack was so severe that Murdoch was left with a neck injury. This would set up a National Title match between Adonis and an injured Murdoch later in the main event. Despite his best efforts, Murdoch lost his title when he passed out in Adonis’ Master Lock.

This was just the start of things to come for the Harley Race-trained brawler.

Murdoch would attempt to exact revenge against Strictly Business, only for the numbers game to overwhelm him. To add further insult to injury, on the April 27 episode of NWA Powerrr, Murdoch, Stevens, and Tim Storm lost to Adonis, Thom Latimer, and Kratos. Per the stipulation established beforehand, since Murdoch’s team lost, he was suspended from the NWA for 30 days. Fast forward to NWA Powerrr on May 25; a battle royal was held to declare a new number one contender for the NWA Worlds Heavyweight Championship. Surprisingly enough, not only was Murdoch part of the match, but he would win it all, last eliminating Adonis to do so.

To say that NWA When Our Shadows Fall is big for Trevor Murdoch would be an understatement. If he wins on Sunday, not only will Murdoch exact revenge on Strictly Business but put an end to the historic world title reign of “The National Treasure” to boot. See the resolution of this story on Sunday.

Stay tuned to the Last Word on Pro Wrestling for more on this and other stories from around the world of wrestling, as they develop. You can always count on LWOPW to be on top of the major news in the wrestling world, as well as to provide you with analysis, previews, videos, interviews, and editorials on the wrestling world.  Check out the NWA at FITE.