Double or Nothing was the first-ever show in the history of All Elite Wrestling (AEW). Its importance in terms of when it comes around remains yearly and going into it this year, it feels as though it’s their biggest show once again. With a 10 match card stacked from beginning to end and a full crowd in attendance, this show was one you did not want to miss. Here are the official AEW Double or Nothing results, featuring in-depth analysis and match ratings as well.

— The Inner Circle vs. The Pinnacle in Stadium Stampede

While they may have been relegated to The Buy-In of Double or Nothing, that did not matter. It gave Serena Deeb and Riho the beautiful opportunity to open the first show with full capacity in the United States. And what it allowed them to do was put on a blissful battle for the NWA World Women’s Championship. Deeb displayed an incredible ability to take on the heel aspect of the ring, brutalizing the knee of Riho with the ultimate goal of winning. It allowed the fans to show their love and devotion to Riho, who did her best to fight back time and time again. The crowd was eating it up and Riho used that energy to fight through the pain. As she got to her feet, she hit Deeb with everything she had and it led to some near falls that made it look like we had a new champion.

In the end, Riho had to tap out to the one-legged Boston Crab on her injured left leg. But the beauty of this match was that the crowd made you know how special it was and the competitors fed off of that. If you wanted to call this the greatest pre-show match in history, few would argue with you. Deeb and Riho recognized their opportunity here going out there first and put on a show that will leave the rest of the night and all of its competitors trying to top it. A job well done. 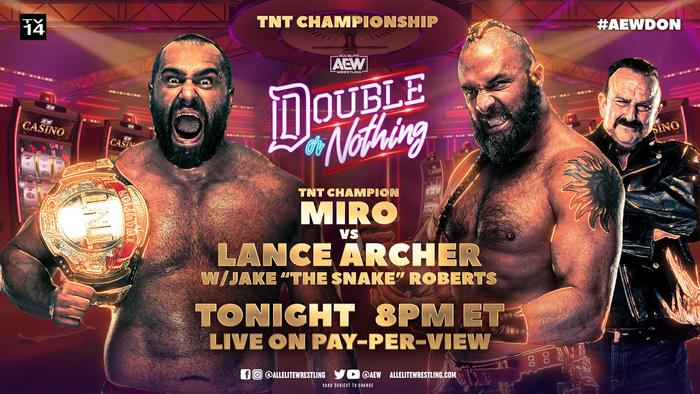 Miro versus Lance Archer for the TNT Championship could have been something special. Yet, following Cody Rhodes versus Anthony Ogogo, it became noticeable that the crowd was no longer in it. And that hurt the match here. What could have been a serious hoss fight was more of one-sided domination by Miro with Archer having a brief moment of opportunity at the end. The big moment was when Jake “The Snake” Roberts attempted to bring Damien the snake to the ring but it saw Miro instead throw it across the ramp at ringside. Archer managed to get Miro into position for the Blackout, but Miro escaped and eventually locked on the Game Over submission, bending Archer in half and making him tap.

Coming away from this match, it should be considered nothing more than a letdown. These two surely could have had a more impressive outing against one another, but time and a crowd not being into it hurt the match in the end. A major win for Miro, though, which after all was the necessary aim of this. As a match, it wasn’t much, unfortunately. 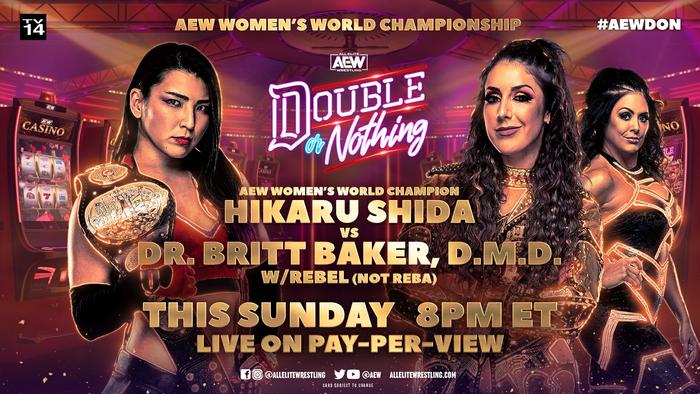 I have gone on record to say that this is one of the biggest matches in AEW’s two-plus-year history to this point. And it is, in fact, the biggest women’s match to happen. The question was this — Could it deliver?

It’s worth noting that over the last year, Britt Baker has shown a massive improvement and for many is the most improved wrestler in all of professional wrestling. Her character work has been undeniable and her matches have got better and better. This was her chance to show it all counted as she faced off with Hikaru Shida for the AEW Women’s World Championship. Shida, after all, has done everything in her power to raise the women’s division to a new level during her reign and was exactly what AEW needed all this time. That being said, this was Baker’s night and no one was stopping her.

The early going in the match was a slow one, with Baker having a lot of the offense and Shida on the ropes. It wasn’t until Shida found her offense that this match would pick up and get a whole lot better. Shida hit Baker with knee after knee, coming closer to retaining than anyone expected. The closing stretch elevated this one. Rebel attempted to hit Shida with the crutch but instead smashed Baker across the head. This gave a brilliant near fall that saw Baker barely survive. In the end, a Curb Stomp to the title belt and the Lock Jaw submission resulted in a win for Baker and a new champion. While we could have asked for even more here, this match did exactly what it needed to do. Shida got to show how strong she was while crowning the new, fan-wanted champion. 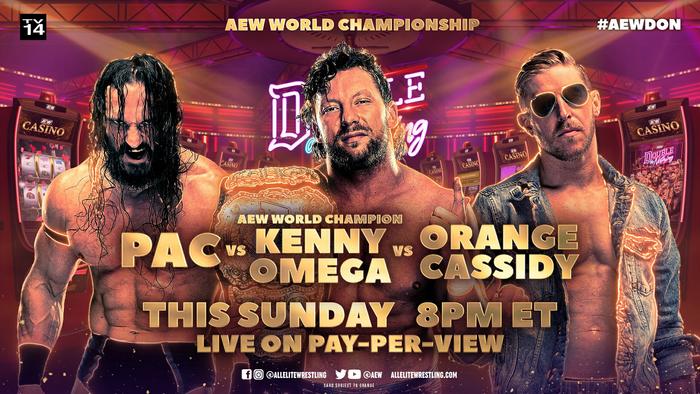 There’s a beautiful thing that happens when a promotion puts three great professional wrestlers in a world championship match. And that’s the crazy idea that AEW decided on for the main event. Kenny Omega defended his AEW World Championship against PAC and Orange Cassidy in the co-main event of the evening and there was a special feeling in Daily’s Place during the entire matchup. Cassidy managed to show everyone that he’s not only outmatched when in there with Omega and PAC, but he could be and would be a special talent in the biggest match of his career. There were multiple occasions that it looked as though Cassidy was walking out as champion and the crowd ate it up. However, it would be wrong to never give credit to Omega and PAC.

The champion showed why many believe he is the best wrestler in the entire world. There was a span in the match where he entered a methodical pace as he hit V-Trigger after V-Trigger, dissecting both of his opponents. He showed a masterful understanding of being the most despised man in the match, repeatedly getting the crowd to a point of intense anger. Then there’s PAC, who proved once again on the main stage that he is AEW’s most complete professional wrestler. While his promo work has always been spectacular and was leading to this match, PAC showed that his intensity and believability are second to none. Back and forth all three men went with seemingly all of them coming so close to walking out as champion. PAC would hit a picture-perfect Black Arrow onto Cassidy, but Omega managed to stop him from getting the win.

As the match neared its ultimate end, Cassidy hit not one, but two Orange Punches to PAC and was on his way to the win of his career with the fans behind him. Don Callis got involved, pulling out the referee and aided Omega’s eventual win. “The Cleaner” put down “The Bastard” with four shots to the skull with all four of his belts. Cassidy nearly stole it after the fact, but a reversal on Cassidy’s pinfall claimed him the victory.

The convoluted finish of this match did not ruin what was a fantastic triple threat between these three men. All three men showed they are among the best in AEW and the world. This was the best match of the night and one of AEW’s best all year.