What better way to start the weekend than with another episode of ChocoPro? On this show, the main event will see an energetic fourth-generation Gatoh Move Pro Wrestling star test her mettle against one-half of the dominant Asia Dream Tag Team Champions. We will also see a tag team contest that should prove to be nothing short of competitive. Without any further delay, let’s take a deep dive into the action set for ChocoPro #124. 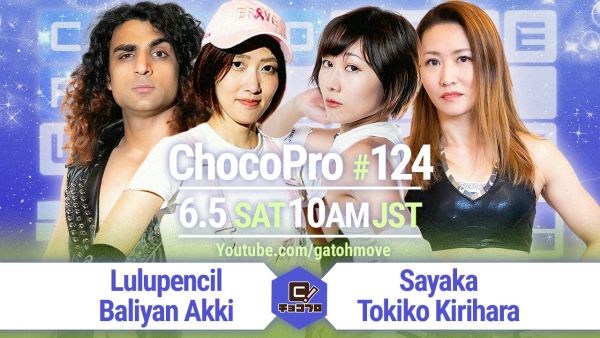 Starting off ChocoPro #124 is a tag team contest between Lulu Pencil and Baliyan Akki and the duo of Sayaka and Tokiko Kirihara. Affectionally known as “Othello” to the ChocoPro faithful, Sayaka and Kirihara formed their new team on episode #122. In Best Bros‘ birthday gauntlet match, the reigning Asia Dream Tag Team Champions defeated Othello in the opening match. The genesis of their team name of Othello came from the board game of the same name. It was also derived from the fact that while Sayaka wrestles in white gear, Kirihara’s is black.

Wrestling Othello will be the team of Pencil Army commanding officer Lulu Pencil and one-half of the Asia Dream Tag Team Champions, Baliyan Akki. Lulu Pencil and Akki previously teamed on ChocoPro #115 earlier this month. Together, they defeated Sayaka and Chie Koishikawa. Following the match, Akki offered words of encouragement to Lulu Pencil, who seemed to be struggling, more so than usual, following Chris Brookes‘ defection from Pencil Army. Expect the unlikely duo of Lulu Pencil and Akki to stop at nothing to pick up another win as a duo.

The main event of ChocoPro #124 pits Mei Suruga, Gatoh Move’s “Apple Girl” and recent birthday girl, against “Too Much Energy” Chie Koishikawa. On the previous episode, Suruga and Baliyan Akki celebrated their birthdays by competing in a grueling 2-on-10 gauntlet tag team match. Best Bros fought valiantly, picking up two wins, suffering one loss, and the remaining two matches ending in draws. Needless to say, Gatoh Move celebrates its stars in unique ways. Now that Suruga has had a few days to recover from the aforementioned gauntlet tag team match, she will reenter Ichigaya Chocolate Square for a spirited challenge.

Challenging Suruga, Chie Koishikawa has shown rapid growth as of late. Her full-time move to professional wrestling last year has clearly lit a fire under her. Not only has she created her own gear but seemingly increased her intensity, all the while expanding her skill set. Whether fighting solo or working alongside Hagane Shinnou as the team known as Egg Tarts, Koishikawa has proven herself as a formidable star on the rise. Keep in mind that the last time Suruga and Koishikawa fought in singles competition, which was back on episode #55 this past October, it was “The Apple Girl” that emerged victorious. Can the former fencer with deadly chops in Koishikawa achieve retribution?