This weekend’s edition of ChocoPro will feature a history-making gauntlet tag team match. There has been no other time, in the history of Gatoh Move Pro Wrestling‘s YouTube show, where competitors had to go the distance in an endurance match. Furthermore, this will feature the promotion’s Asia Dream Tag Team Champions testing their mettle against five other duos, one of which will be a mystery until match time. Take a look at what to expect on the one-match ChocoPro #122 event. 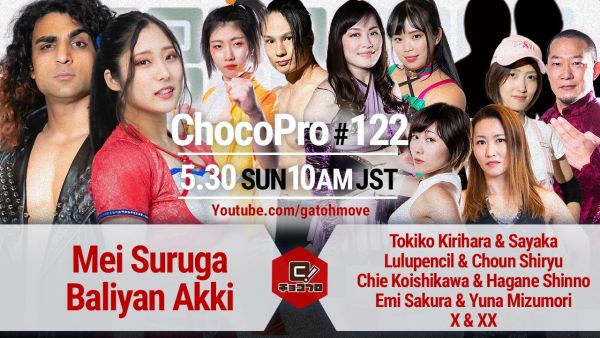 ChocoPro #121 was a celebratory episode, marking the three-year wrestling anniversary of Mei Suruga. In the show’s main event, “The Apple Girl” battled current World Woman Pro Wrestling Diana Tag Team Champion, Haruka Umesaki. This match was notable as Umesaki was Suruga’s first true rival in wrestling. Suruga was able to defeat Umesaki in this encounter that went over 25 minutes. Suruga was honored on this episode and she even celebrated her birthday. However, neither Suruga nor Baliyan Akki‘s day ended here.

Following the aforementioned festivities, Suruga and Akki made the declaration that there were no other teams left to face Best Bros. As the reigning Asia Dream Tag Team Champions, they conquered all teams in title contention. Needless to say, Best Bros were boisterous, though one can argue understandably so. In Akki’s words, “nobody’s left.” Taking umbrage with Best Bros and their overconfidence, Emi Sakura noted that they had potential opponents in King of FREEDOM Tag Team Champions, Rina Yamashita and Minoru Fujita. However, at this past Friday’s F Spirit 2021 event, they dropped the titles.

Shifting focus back to ChocoPro #121, Sakura declared that Best Bros would participate in a gauntlet match. On ChocoPro #122, the Asia Dream Tag Team Champions will battle five teams, one after another. Suruga and Akki will have to go the distance, taking on a total of 10 wrestlers in sequential tag team matches. From makeshift duos such as Lulu Pencil and Chon Shiryu to established tandems like Egg Tarts, there are multiple unique components on display in this match.

ChocoPro #122 is history-making in that it will hold the first-ever gauntlet match in the show’s history. Perhaps there are no competitors better fitted for this stipulation than Best Bros. Mei Suruga and Baliyan Akki have been nothing short of formidable, especially since winning the Asia Dream Tag Team Titles this past December. With that said, a gauntlet match will prove to be a unique obstacle. Watch Suruga and Akki go the distance when ChocoPro #122 airs live on the official Gatoh Move YouTube channel.

AEW Double or Nothing 2021 Predictions and Preview (5/30/21)
From The Rest To The Best: Deonna Purrazzo Solidified as One of Wrestling’s Best in One Year