This week’s special edition of AEW Dynamite will be an exercise in violence and vengeance, as AEW brings you Blood and Guts. After a long delay, fans will finally witness one of the most anticipated and barbaric matches to happen all year. Two teams, two rings, and one huge unforgiving cage. Careers will be shortened and legacies will be solidified. The savagery and brutality will be cranked up a notch as rivalries are settled and battles will be decided in an all-out war. Blood and Guts will not be for the faint of heart.

If you’re a bloodthirsty wrestling fan then Wednesday night is your fix for exactly that very thing. And if you’re squeamish, better bring a buddy to tag along because it will be a car wreck that’s so grandiose you will not be able to look away for one second. Without further ado, let the rampage ensue. Blood and Guts will be a jam-packed night come Wednesday Blood Wednesday. “It’s Wednesday night, and you know what that means!” It’s time to run it down.

– 4-Way Tag Team Eliminator Match: SCU vs. Jurassic Express vs. Varsity Blonds vs. The Acclaimed – “Winner gets a shot at the AEW World Tag Team Championships”

– Blood and Guts Match: The Inner Circle vs. The Pinnacle 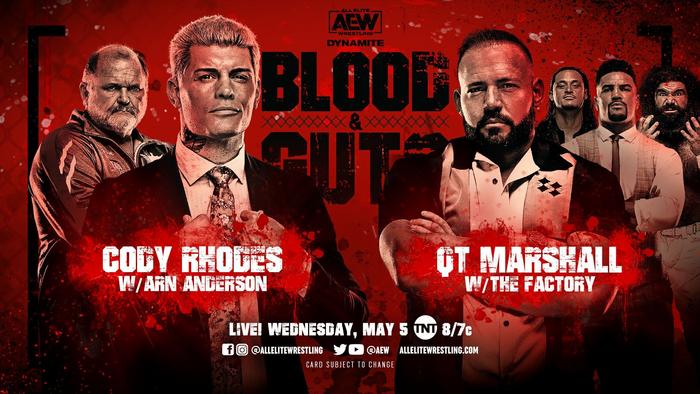 QT Marshall has made it his mission to prove everybody wrong. Every chance he got he would hammer the point home that he wasn’t just a friend of “The Prince of Pro Wrestling” Cody Rhodes. QT believes he was so much more than a sidekick. That The Nightmare Factory wouldn’t have ever produced this many up-and-comers if it weren’t for him. He has brutalized Dustin Rhodes as well as the students that remained loyal to Cody. In the process, he would change the opinion of the doubters of Cody and made them his followers. Anthony Ogogo, Nick Comoroto, and Aaron Solow all wholeheartedly believe that QT will bring them all to the promised land. They’re firmly convinced that Marshall’s way is the right away to stardom.

Last week on Dynamite, Cody made his triumphant return surprising Marshall as he came out of the Nightmare Express bus and laid down a beating Marshall won’t soon forget. In front of an adoring crowd, Cody made his presence known and in a big way punishing some sense in his old friend. But, QT being QT, he probably took it as a sign of war and envy. So, AEW management got ahead of the problem and sanctioned a match to hopefully end this bitter blood feud between former best friends. This has been personal for a long time now. It has been brewing not only for months but probably for years and it is all now bubbling up to the surface. Will QT Marshall finally achieve his twisted vindication or will Cody Rhodes do the unthinkable and end his friend’s delusions? 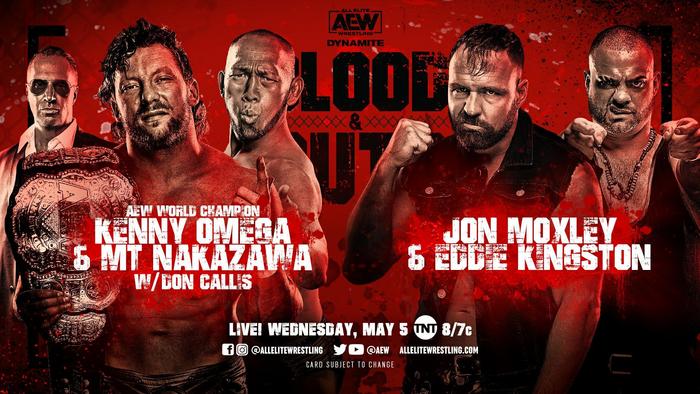 Since the events of Revolution, Jon Moxley and Eddie Kingston have been itching to get their hands on AEWWorld Champion Kenny Omega. They will finally get their wish as they got Don Callis to agree to a tag team bout with Omega teaming up with MT Nakazawa. Mox and Kingston’s methods to get this match didn’t exactly leave anybody involved with a choice. They would put Omega’s leg in between the clamps of a steel chair, promising to break it if they weren’t granted the match. With much panic and being backed into a corner, “The Invisible Hand” didn’t have much room to negotiate and immediately said yes to this two on two contest.

All this pent-up aggression and resentment will be on display come Wednesday night. Omega and The Elite brought this upon themselves. They got outfoxed by the two friends and they will get what they’ve been wanting all this time. To say this is personal is an understatement. Omega will have nowhere to run or hide as Kingston and Moxley, one way or another will get their retribution. Will Moxley and Kingston hand the beatdown of a lifetime or will Omega and Nakazawa squirm their way to another victory?

The War To End All Wars

Get your tickets now to join us LIVE in Jacksonville TOMORROW NIGHT to see #AEW's FIRST BLOOD and GUTS match – https://t.co/UN1cNj1kQq pic.twitter.com/FfcAytueQC

The Inner Circle won’t have to wait much longer to get their hands on The Pinnacle. Locked inside an enclosed cage with two rings, there will be no room for much talking or mercy. Chris Jericho and his band of brothers will not be looking to have a match with MJF’s crew. They want violence and blood spilled on the canvas. And The Inner Circle will do whatever it takes, no matter how heinous or unforgiving it might be just to teach The Pinnacle a lesson. Deceit, lies, and jealousy were just some of the factors that got both factions to this point. No matter how they were lead here is beside the point. Someone will inevitably meet their maker whether it’s The Pinnacle or The Inner Circle. Chaos will reign supreme and bedlem will be unleashed. Inner Circle vs. Pinnacle. Let the war begin.