In the final show in a line of five consecutive events, Gatoh Move Pro Wrestling is set to hold ChocoPro #114. In addition to Gatoh Move wrestlers and veteran talent, we will also see appearances from a few Actwres girl’Z stars, adding that much more flavor to the show. For those that are planning on tuning in, it’s time to brush up on some information. Let’s take a look at the action set for this upcoming show. 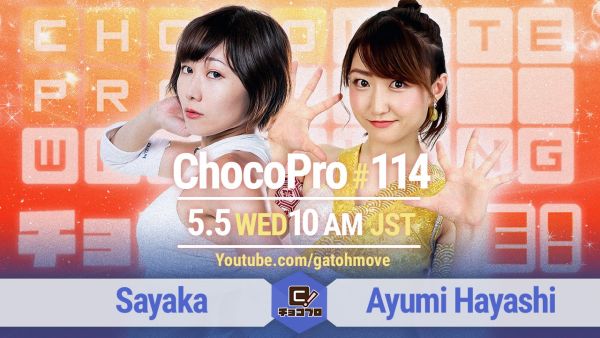 “Wasshoi, Wasshoi!” Making her first ChocoPro appearance since April, Ayumi Hayashi is prepared for battle. Her last appearance took place on episode #108, where she teamed with Sayaka, “The Beautiful Cosplayer,” to defeat Lulu Pencil and Emi Sakura of Pencil Army. Hayashi’s iconic war cry has become incredibly popular with fans, not only in her home promotion of AWG but in Japanese wrestling across the board.

In this opening match, Hayashi faces her former tag team partner in singles action. Sayaka has steadily grown as a performer, becoming more capable and confident from bell to bell. In fact, it was on the previous episode of ChocoPro where she bested Lulu Pencil, picking up her first-ever singles victory in the process. Can Sayaka continue her winning ways with a win over the spirited Hayashi? 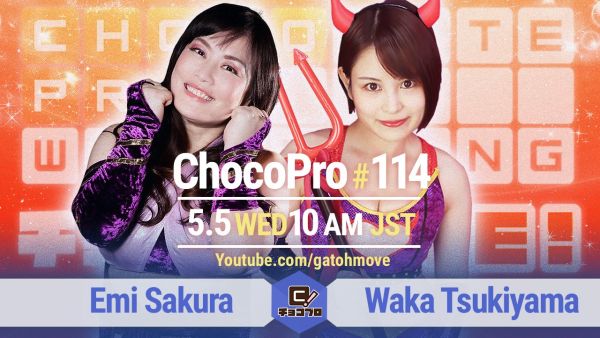 Speaking of AWG wrestlers appearing on ChocoPro, it’s time to shift focus to the devilish Waka Tsukiyama. Her previous ChocoPro match was back on episode #111, which saw her team with the equally spirited Chie Koishikawa in a valiant effort against the duo of Sayuri and Emi Sakura. Despite her devil horns and pitchfork, Tsukiyama’s energy and charm have made her a quick favorite in Ichigaya Chocolate Square. However, on this episode, she will face her greatest challenge yet in the form of Sakura.

As the founder of Gatoh Move, there is perhaps no figure on ChocoPro as prominent as Sakura herself. In addition to being the woman that makes everything happen, she is able to shift between roles well, whether it’s as the dominant veteran star or the weaker yet equally wily Pencil Army member. This match will see Sakura do away with the overalls as she puts forth her best effort against the up-and-coming AWG star. Needless to say, a victory here would be huge for Tsukiyama. 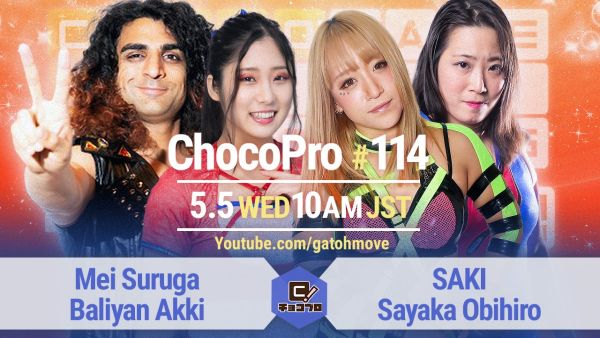 The final match of this five-show stretch will see the Asia Dream Tag Team Champions, Best Bros, in action. Though they have been apart in recent shows, Mei Suruga and Baliyan Akki will, once again, join forces. It’s unknown who the next Asia Dream Tag Team Championship contenders will be, as Suruga and Akki have bested all tandems that stepped up to the plate. They shouldn’t let their confidence get the better of them, however, especially given the caliber of opponents they’re set to face on ChocoPro #114.

SAKI, the AWG Champion that teamed with Akki on the previous episode, will be teaming with Sayaka Obihiro, who recently celebrated 11 years in professional wrestling. The experience that SAKI and Obihiro bring to the table can’t be overlooked. With that said, it’s important to note that they haven’t teamed, in a traditional two-on-two match, since 2017. Furthermore, this 2017 bout was one that they were on the losing end of. Can they pick up a victory at the end of said five-show stretch, upsetting the Asia Dream Tag Team Champions in the process?