It isn’t often that Gatoh Move Pro Wrestling holds one-match shows, but when they do, it’s a certainty that they will deliver. The last time that ChocoPro held a sole match was episode #82 this past January, when the Pencil Army trio of Lulu Pencil, Emi Sakura, and Minoru Fujita battled the three-wrestler group of Best Bros and Yuna Mizumori. On episode #110, the numbers are even greater. Take a deep dive into this one-match edition of ChocoPro. 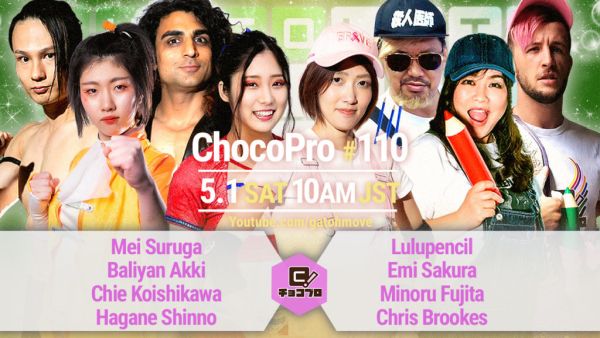 For the first time, all four members of Pencil Army will be in action in the same match. Think back to episode #106, however, and it’s easy to see that there are tensions within the ranks. On this particular episode, Lulu Pencil and Chris Brookes teamed up in a losing effort against PSYCHO and CHANGO. Brookes was stern, telling the Pencil Army commanding officer that he believed all he did was lose since joining the group. He couldn’t have been clearer: the next time that they team up, they better win.

This isn’t to say that Lulu Pencil and Brookes will be on their own, as they’re teaming with veteran wrestlers Emi Sakura and Minoru Fujita. As “Emi Pencil,” the long-time joshi star adopts a more cunning approach while sacrificing power and technique. Meanwhile, one cannot deny the influence of “Mino Pencil,” who is the current reigning Super Asia Champion in Gatoh Move. Pencil Army is nothing short of eclectic and their combined efforts may be enough to net the group an important victory.

Such a goal won’t be easy to attain, however, given the caliber of opponents they’re up against. This two-team quartet consists of Best Bros and Egg Tarts. Best Bros, the team of Mei Suruga and Baliyan Akki, are the current Asia Dream Tag Team Champions. Their combined skills and charisma have made them the premier team in Gatoh Move. Furthermore, they are coming off a recent successful title defense against Tokiko Kirihara and Antonio Honda, also known as Black Comaneci, from the previous episode.

Teaming with Best Bros is the unlikely duo of Chie Koishikawa and Hagane Shinnou, collectively known as Egg Tarts. Though Koishikawa is characteristically exuberant and Shinnou is stoic and hard-hitting, they have proven to be a formidable team in their own way. In fact, one may argue that they’re next in line for an Asia Dream Tag Team Championship match down the road. However, on ChocoPro #110, Best Bros and Egg Tarts will have to be on the same page to overcome a complete Pencil Army.