After a week of independent events running around the clock in the Tampa area over the course of WrestleMania Week, many indie fans got a surprise pop when one of the opening shots of WrestleMania night one saw a masked Jimmy Lloyd wearing a Game Changer Wrestling (GCW) T-Shirt and enjoying a well-earned beer after competing in multiple matches that week. Lloyd started the week with a match against Starboy Charlie at his own event, GCW Jimmy Lloyd’s D-Generation F, on Thursday afternoon, before returning for the GCW Acid Cup 3 first round the following event. On Friday, he took part in the GCW Rickey Shane Page Spring Break event, and then at midnight, headed over to Violence X Suffering (VxS) to compete at VxS Lucid Dreams. After four grueling matches, Lloyd headed to WrestleMania at Raymond James Stadium to take in the show with some friends.

But the story got even more interesting. It appears that RJ Stadium/WWE officials had issues with Lloyd wearing a GCW T-Shirt – due to it being a “rival” promotion one would assume – and per tradition, he has his shirt replaced by a WWE product. And the shirt of choice for Jimmy Lloyd was that of The Hurt Business, the faction of WWE Champion Bobby Lashley.

So I guess GCW is now on the ban list, but in better news they did what @TheJimmyLLoyd mother couldn’t do and that’s make him change his T shirt for the first time in 3 months……. pic.twitter.com/6Z1Q13OBaJ

As fans and indie wrestlers continued to point out and laugh at the costume change for indie wrestling’s “Different Boy”, the internet took it upon itself to update The Hurt Business’ profile on Wikipedia, where they included Jimmy Lloyd under the faction’s current list of members. 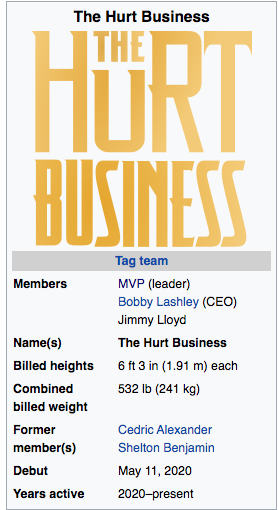 The fun trip ended with Jimmy Lloyd heading to his final booking of the weekend for No Peace Underground’s NPU Shallow Graves event, held around midnight on Saturday, where he came out to the ring wearing his new T-Shirt.

Obviously, WWE will never officially sanction Jimmy Lloyd’s “induction” into the Hurt Business on Saturday, but it was a fun moment for all the indie fans who spent the week watching Jimmy Lloyd (and countless others) perform over the week get a little fun time with WrestleMania itself.