To have closure means completing an endeavor on one’s terms. One of the industries where closure seems to be the most important is professional wrestling. There have been a number of wrestlers able to retire from in-ring competition when they expected to. Others haven’t been so fortunate, having been forced to leave their craft behind. Ten years ago today, WWE Superstar Edge became part of the latter, as he announced his in-ring retirement on April 11, 2011.

Edge has not been a stranger to high-impact offense, as his history in Ladder and TLC Matches will indicate. However, his neck issues truly began in September of 2002. On an episode of SmackDown, he wrestled Eddie Guerrero in a No Disqualification Match. During the match, Edge brought out a ladder from under the ring. A few minutes later, Edge took a back bump on the ladder, his neck sustaining the brunt of it. In the months that followed, other issues arose, including numbness in his extremities and muscle loss. The following February, in 2003, Edge underwent spinal fusion surgery, which kept him out of action for over one year.

This wasn’t to say that WWE Superstar Edge lacked success following his return in March of 2004. Upon making his return, he added four more Tag Team Championships to his already impressive tag team resume. More importantly, the first-ever Money in the Bank winner became an 11-time World Champion under the WWE umbrella. By the time he retired in 2011, Edge was one of the top stars in the company. Before then, his final match took place at WrestleMania XXVII that April. On this night, in the opening match, he successfully defended the World Heavyweight Championship against Alberto Del Rio. The following night, on Monday Night RAW, the celebratory mood of the night prior changed.

The In-Ring Retirement of Edge

The April 11, 2011 episode of Monday Night RAW took place from the Webster Bank Arena in Bridgeport, Connecticut. During the show, then-World Heavyweight Champion, Edge, made his way to the ring. Prior to this, rumors regarding Edge’s physical condition circulated online, especially following his WrestleMania showing the previous evening. From there, Edge spoke about the reality of wrestling, his injuries, and most importantly, his future concerning in-ring competition.

“A lot of people think that the WWE doesn’t hurt – that what we do, maybe it’s done with smoke and mirrors, and I wish that were true,” WWE Superstar Edge said. “But anybody in that locker room, anybody who has ever stepped foot in here, laced up a pair of boots, they know that’s not the case. Which brings me to what I’m about to tell you.”

Edge detailed his neck surgery in 2003, which he said allowed him to “wrestle on borrowed time.” However, he revealed that he was experiencing symptoms similar to those pre-spinal fusion. He had been in pain, losing feeling in his arms. This prompted WWE officials to instruct Edge to undergo testing.

“I passed strength tests and all of those things, and I made it through WrestleMania,” Edge continued. “But the WWE wanted me to get more tests, and thankfully I did. Because the MRIs showed that I have to retire.”

“The Doctors Have Told Me I Got No Choice.”

In an instant, it was as if the air in the Webster Bank Arena had been depleted. However, Edge expressed gratitude, as wrestling further would have led to more disastrous results for his long-term health. The crowd expressed their own gratitude, cheering and chanting “Thank You Edge” to their beloved World Heavyweight Champion.

Edge took the time to spotlight Christian, his former tag team partner and long-time best friend. When Edge was angry at himself, as well as his body, Christian offered support each step of the way. Edge reminisced on his and Christian’s lives as wrestling fans growing up, as well as the moment when Edge decided he would become a professional wrestler. The fact that he was going to retire, as the World Heavyweight Champion, felt like a strong final chapter, even if he didn’t expect the story to end so soon.

From there, Edge spoke about when he had his first WWE match in 1996, where he wrestled Bob Holly at a house show in Copps Coliseum. Edge believed he grew up in front of the WWE Universe, going from the brooding, trenchcoat-wearing stranger running around the streets of New York to The Brood‘s “pseudo vampire” and beyond. With a smile on his face, Edge recalled different memories from his time in WWE, much to the delight of the fans watching around the world.

Once more, the crowd in attendance broke into a “Thank You Edge” chant. Edge had put in years of service in WWE, a fact that wasn’t lost on fans. Later that week, on SmackDown, Edge gave his formal farewell speech to the WWE Universe. With his mother in attendance, he relinquished the World Heavyweight Title. A WWE scene without Edge seemed foreign, especially to those that have watched him for years. However, despite being retired from in-ring action, he didn’t struggle to keep busy. 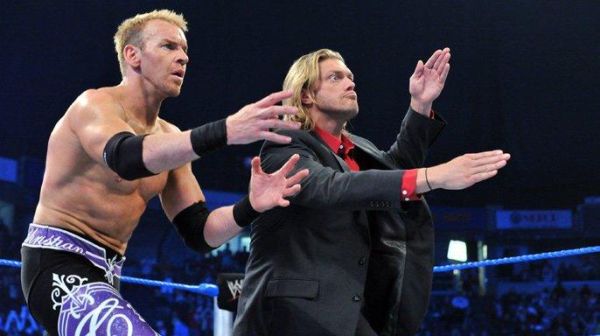 Even after his in-ring retirement, Edge made sporadic appearances on WWE programming. Most notably, one month after the aforementioned announcement, WWE held its Extreme Rules event, where Christian battled Alberto Del Rio for the vacant World Heavyweight Title. With help from Edge, who evened the odds against Del Rio, Ricardo Rodriguez, and Brodus Clay, Christian won his first WWE World Heavyweight Championship. Edge celebrated with his friend in this feel-good moment.

The following year, Edge would be honored for his contributions to professional wrestling when he was inducted into the WWE Hall of Fame as part of the Class of 2012. Appropriately enough, it was Christian that inducted him. In addition to acting and podcasting projects outside of WWE, Edge’s appearances for the company continued. Up until this point, they were all done without physicality. That was, however, until SummerSlam of 2019 in Toronto, Ontario, Canada.

During the SummerSlam 2019 Kickoff, Elias played one of his tunes to the chagrin of the WWE Universe. No stranger to his performances being interrupted, Elias was irate when Edge made a surprise appearance. The Ontario native soaked in the raucous response from the fans in attendance. Edge entered the ring and suddenly dropped Elias with his trademark Spear. Keep in mind that this was the first wrestling move the “Rated R Superstar” executed in over 8 years. Though Edge routinely shot down the possibility of returning to the ring, this moment did nothing but stoke the flames among fans. They would simply have to wait a few more months.

Rampant speculation would finally be confirmed at the Royal Rumble 2020 event. During the Men’s Royal Rumble, there were many surprises, though none were as monumental as returning WWE Superstar Edge entering at number 21. This was the “Rated-R Superstar’s” first match in nearly a decade and though he was years older, it looked like he lost nary a step. Grizzled and determined, Edge had a new lease on life, from a career standpoint, and he was determined to make the most of it.

Following the Royal Rumble that year, Edge entered a feud with Randy Orton, even picking up a win over the “Apex Predator” at WrestleMania 36 in a Last Man Standing Match. The following June, at Backlash, Edge’s comeback was halted in its tracks. At this event, the “Ultimate Opportunist” faced Orton in a rematch that was won by the latter. During the match, however, Edge sustained a legitimate triceps tear, which kept him out of the ring for the rest of the year. However, he vowed that he would return. When he did, he would do so with greater purpose.

This past January, WWE Superstar Edge did exactly that. He entered the 2021 Royal Rumble Men’s Match at number one, competing for nearly an hour. After finally eliminating Orton, Edge emerged victorious. One year following his return from retirement, Edge punched his ticket to the main event of WrestleMania 37 to challenge Universal Champion Roman Reigns; later on, Daniel Bryan would be added to the mix, making the match a triple threat encounter. Roughly ten years following an emotional retirement speech, to see the “Rated R Superstar” stand in one of the premier matches of WrestleMania is storytelling at its finest.