ChocoPro #106 marks the final show in a second three-day consecutive run of Gatoh Move Pro Wrestling events. Last time, viewers saw the Gatoh Move debut of one of the most charismatic young stars in the joshi puroresu scene today. They were also witness to a competitive main event that saw two members of different teams joining forces. What does this promotion have in store on this upcoming episode? Here’s what to expect. 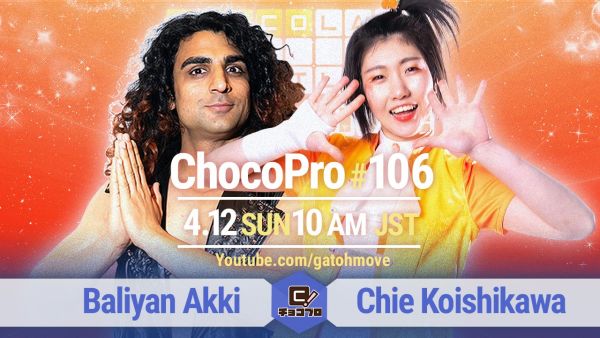 Opening ChocoPro #106 will be a singles encounter between Baliyan Akki and Chie Koishikawa, both of whom are coming off losses from the previous episode. On ChocoPro #105, Koishikawa fell to the debuting Ayumi Hayashi, who is most notable for her work in Actwres girl’Z. Meanwhile, Baliyan Akki teamed with Lulu Pencil, the Pencil Army commanding officer herself, in a losing effort against Chon Shiryu and PSYCHO. In other words, Koishikawa and Akki will enter this match with the intent to regain momentum. Will Koishikawa’s trademark energy be enough to take her to the end, or will Akki’s combination of high-flying offense and strikes allow him to pick up a vital singles victory? 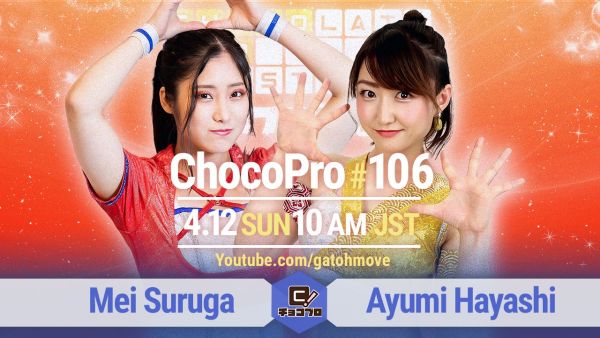 On the previous episode of ChocoPro, as mentioned earlier, Ayumi Hayashi made her Gatoh Move debut. Furthermore, the charismatic AWG star was able to pick up a notable win over Chie Koishikawa in what could best be described as an energetic showdown. With her trademark exclamation of “Wasshoi, Wasshoi,” Hayashi has been on a roll. However, it’s fair to say that she has bigger mountains to climb if her work in Gatoh Move continues. On ChocoPro #106, she is set to take on a top star in her own right.

Enter Mei Suruga, one-half of the Asia Dream Tag Team Champions alongside Baliyan Akki. The last ChocoPro show saw her defeat fourth-generation star Rin Rin in the opening contest. Despite being more of a tag team wrestler as of late, “Mei-chan” is able to hold her own in one-on-one contests. If history is indicative, her upcoming match against Hayashi should be no different. Suruga will enter this match with the goal of handing Hayashi her first loss in Gatoh Move. Expect this match to be nothing short of competitive. 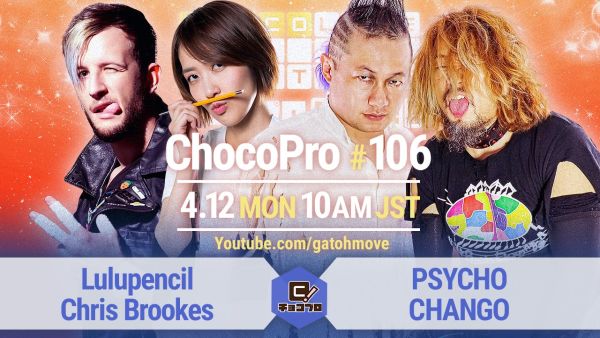 The formidable “Chris Pencil” returns to Ichigaya Chocolate Square as Chris Brookes teams with fellow Pencil Army member, Lulu Pencil, in this main event encounter. Since being recruited into Pencil Army, Brookes has become somewhat warmer in demeanor, though his offense has been no less effective. In fact, it can be argued that this partnership has helped make Lulu Pencil stronger, which has been a goal of hers since the beginning. The pink overalls-wearing duo will have a tall challenge ahead of them, however, in this upcoming main event.

ChocoPro fans that have watched the 100th episode will undoubtedly be familiar with the duo of PSYCHO and CHANGO. On Day One of this two-day event, this team bested Chie Koishikawa and Hagane Shinnou, also known as Egg Tarts, in tag team action. Their rough-and-tough style of offense has made this duo one for fans to keep their eyes on. This is especially true given the aforementioned victory PSYCHO picked up on the previous episode of ChocoPro. With such unorthodox opponents as Pencil Army, they will have to work that much harder to have their arms raised by the end.