Ice Ribbon’s show on April 11th comes from SKIP City. It will feature two titles on the line in a card featuring three big tag matches. Let’s take a deeper dive into the Ice Ribbon 1109 in SKIP City event set to take place this weekend. 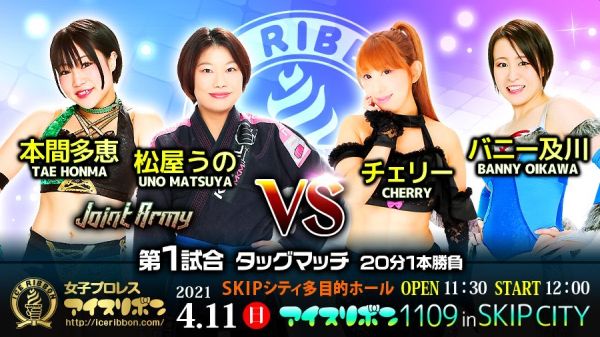 Tae Honma and Uno Matsuya vs. Cherry and Banny Oikawa

The show kicks off with a tag match between Joint Army members Uno Matsuya and Tae Honma taking on the team of Banny Oikawa and fellow Joint Army member Cherry. At the Ice Ribbon show on the 27th of March, Uno won the Triangle Ribbon Championship. This year, she has picked up the pace; she has gone to the next level with her in-ring work, which has made her submission and technical style fun to watch in the ring. Honma herself has also had a successful run as a tag champion in her home promotion of Actwres girl’Z, and whenever she teams up with Matsuya, they tend to be successful.

On the opposing side, Matsuya and Honma take on the newer member of Joint Army in Cherry. Although she hasn’t worked Ice Ribbon much, she has been popping up in various promotions throughout 2021 and has consistently shown how good she can be against a variety of opponents. Splitting her time between being a referee for Ice Ribbon and a wrestler, Banny was on the winning side of her match at Ice Ribbons show in March. Steadily improving, this will be a good chance for Cherry to learn from the more experienced wrestlers in this match. Since Matsuya is currently a champion, it will be important for her to pick up a win during this match, at Ice Ribbon 1109 in SKIP City, to continue the momentum. 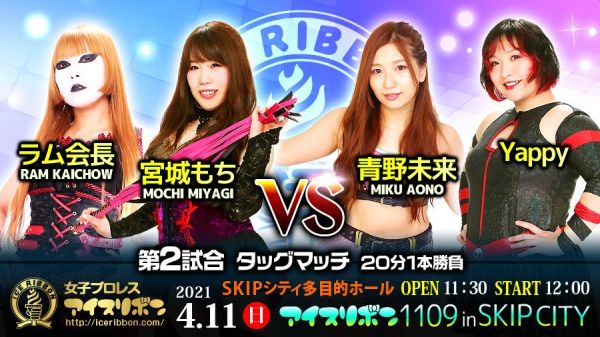 Ram Kaichow and Mochi Miyagi vs. Miku Aono and Yappy

Since the other members of RebelxEnemy are busy on this show, Ram Kaichow will be teaming with Mochi Miyagi for the first time, which makes for a strange pairing, to say the least. Kaichow recently lost her Triangle Ribbon Championship to Uno Matsuya. Since then, the team of RebelxEnemy has lost quite a lot of the momentum that they had for over a year. Her teaming with Miyagi could bring back some of that well-needed momentum into the unit. While Miyagi herself has been having good showings in the ring, her win/loss record isn’t the strongest. However, with this team going up against the lesser experienced Miku Aono and Yappy, there could very well be a chance for them to pick up the victory. 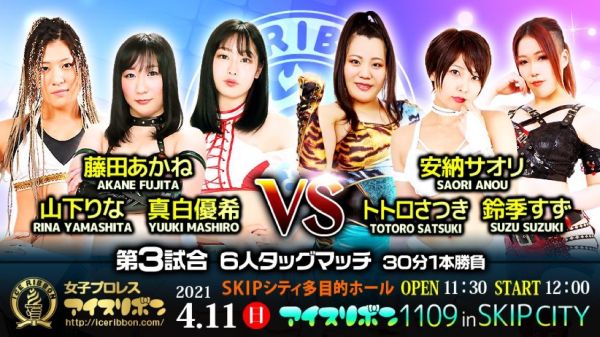 This is another SKIP City match that features members from RebelxEnemy and the Frank Sisters teaming up as Akane Fujita and Rina Yamashita are on the same side. For the past few months, Yamashita and Yuuki Mashiro have built quite the friendship and it’s been working in Mashiro’s favor. Not only does Mashiro gain experience working with one of the best freelancers, but she’s been picking up wins as well. However, it might not be so easy to win against a team as strong as their opponents in this match.

Suzu Suzuki is coming off her loss in her hardcore series to Takashi Sasaki. Nonetheless, the strong, young ace continues to look better in every single match that she has; being able to take her down after these grueling matches won’t be easy. This isn’t the first time that Suzuki and Anou have teamed up in Ice Ribbon. In fact, they have proven to work well as a team, going against the likes of Fujita and Yamashita. It will be interesting to see what they can do. The winning team could go either way. 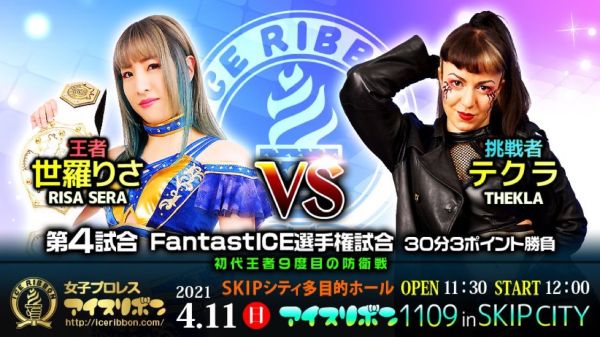 Risa Seria is defending her FantastICE championship for the 9th time as she heads into this match on the 245th day of her reign. Each title defense she has had so far has been one of if not the best match on the card; there is a clear indication this will be the same way. Going into this, Thekla has gone back to her ways of terrorizing her future opponent. In the shows leading up to their match, Thekla has been wearing a shirt with Sera on it, similar to what she did to Tsukushi Haruka, and has resorted to throwing slime at her to throw her off. Similar to all the other FantastICE matches, this will also have a wild stipulation that could only work in Sera’s favor. The match will be a three-point victory match, and with Risa’s years of experience, this will certainly favor her. Fans could very well see Sera’s dominant reign continue at Ice Ribbon 1109 in SKIP City.

Following the match between Tsukasa Haruka and Maya Yukihi for the IcexInfinity Championship of the 27th, Haruka offered her opponent to return as the player liaison for Ice Ribbon after she gave up the role to lead her RebelxEnemy unit. Although she took the role, Yukihi made it clear that RebelxEnemy will continue. However, she may come to regret that with this match. Without a doubt, whenever Yukiho and Fujimoto step into the ring with each other, it will be absolute magic. This is especially true after their last match, which fans have called one of the best from Ice Ribbon this year.

Maika Ozaki has proven in multiple companies that she is a valuable tag team partner, picking up titles outside of Ice Ribbon. Her work with Yukihi has been some of the best that she has produced so far. With the three other women in this match being so experienced, it is easy for someone to fall behind. However, she can definitely keep up. Even though RebelxEnemy have chemistry, it will be difficult to match that of Fujimoto and Haruka, who have been teaming for over a decade at this point. Since both teams have such a deep history, this match at Ice Ribbon 1109 in SKIP City could truly go either way. For the challengers, it would mean that they would be singles and tag champions. For the titleholders, it would mean that RebelxEnemy can get back onto their strong run once more.