As part of We Run This Town Title Match Network is set to hold their latest Ladies Night Out special Midnight In Tampa.  This is an all-women’s show featuring a host of names from the legendary Jazz to rising stars like Skye Blue to established stars like Jordynne Grace. Let’s preview the action for Midnight In Tampa which streams LIVE on Title Match Network at 11:59 pm on April 9th.

Alejandra The Lion vs Dani Mo

Alejandra The Lion vs Dani Mo 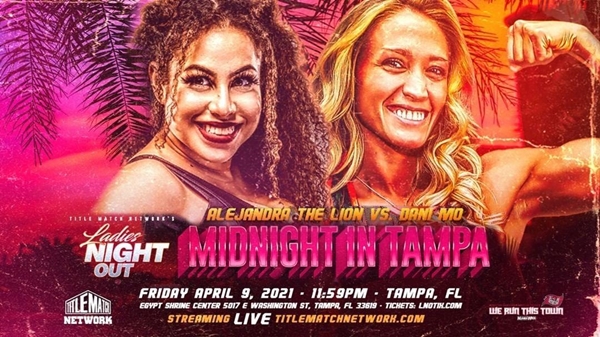 This is a clash of two up-and-coming performers.  Alejandra The Lion is based in Texas and has solely been working around that scene since her debut although she has held gold as she won the KSMH Extreme Rules title.  Dani Mo is another rising name who mostly works in Pennsylvania although she has got some high-profile appearances under her belt for Warrior Wrestling and Game Changer Wrestling.

First Time Ever – JENNACIDE vs Vipress 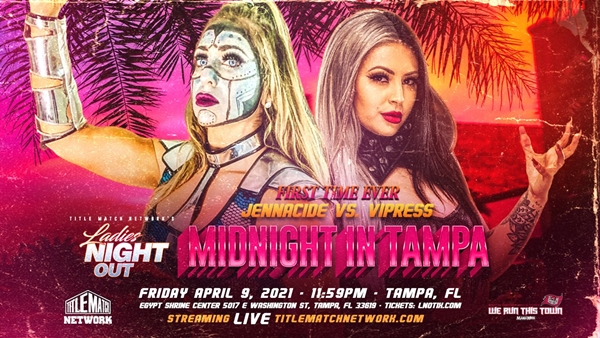 A battle of titans is on the cards as JENNACIDE takes on Vipress.  Both JENNACIDE and Vipress have competed for AEW in recent times with JENNACIDE also making her NWA debut on a recent episode of Powerrr.  Both women have found success but who will emerge victorious in this battle? 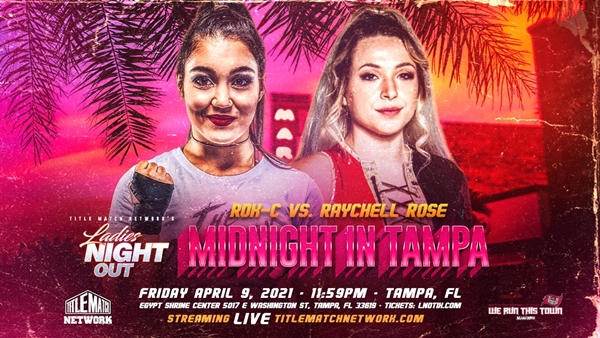 Two standouts of the Texas indie scene will collide here as rising prodigy Rok-C takes on the New Texas Pro women’s champion Rachel Rose.  These two women have competed in for in Reality Of Wrestling with Rok-C coming out on top the last three times they shared a ring.  In ROW Rok-C had more success, she’s their longest-reigning Diamond Champion after all, while the cocky Rose has found more success with New Texas Pro.  These two Texas-based stars will go at it once again on a neutral ground which could lead to Rose getting the win over Rok-C. 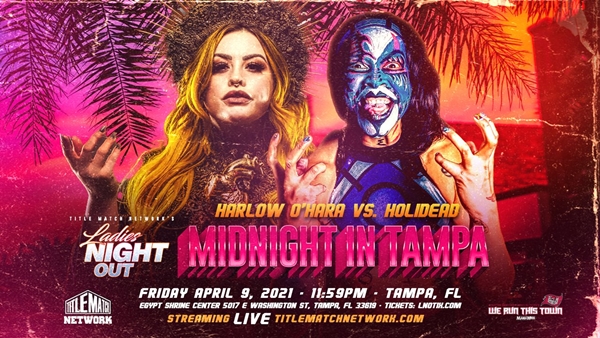 `Twisted Sister Holidead faces the challenge of Harlow O’Hara.  Holidead is a very accomplished performer who has had tours of Japan with Stardom, wrestled in Europe, won titles in Shine Wrestling, and has competed for just about every major promotion in the U.S. both on the indie scene and televised companies.  She takes on Harlow O’Hara who had her career stalled in 2020 but is ready to pick things back up and make her impression. While O’Hara hasn’t got around as much as Holidead she has competed for promotions all over the U.S. including Shine, SHIMMER, Beyond Wrestling, and more. 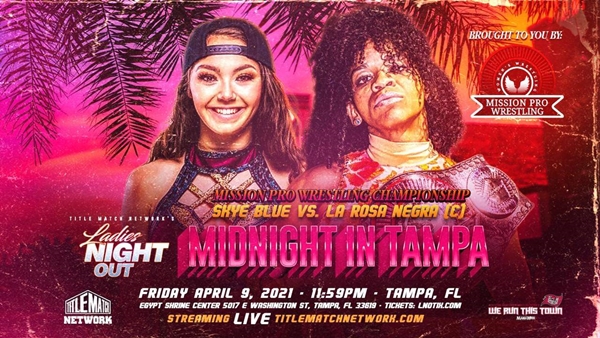 Two women at very different points in their career will collide for the MPW title.  La Rosa Negra is a veteran of pro wrestling who at almost 40 years old has eighteen years of wrestling experience under her belt including tours of Japan which saw her compete for Stardom, Marvelous, Sendai Girls, and SEAdLINNNG.  Negra won the Mission Pro Wrestling title last year after winning a grueling tournament and is set to hold the title as the centerpiece of MPW for some time.  Skye Blue is a performer on the rise who has a bright future ahead of her.  Blue is sure to be a future star in wrestling and has already made her NWA debut and owns a recent win over IMPACT Knockouts Champion Deonna Purrazzo. Clashes like this are always interesting as the veteran Negra will want to fend off the challenge of her young challenger to prove that she can still hang with the best prospects in the scene. 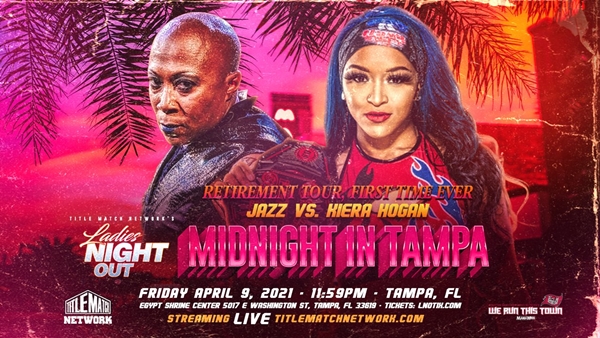 Jazz comes to Ladies Night Out for a stop on her retirement tour as she wrestles Kiera Hogan in singles action for the very first time.  Kiera Hogan has found success in her young career alongside Tasha Steelz in IMPACT Wrestling and has also held tag team gold in WOW with real-life partner Diamante.  Hogan at just 26 is primed to one day be a big star in the women’s scene as her charisma is second to none.  Before that, she has to take on the veteran trailblazer Jazz.  Jazz has been competing in IMPACT Wrestling recently and has proved that she still has all the in-ring talent that has made many fans consider her a legend of the sport. 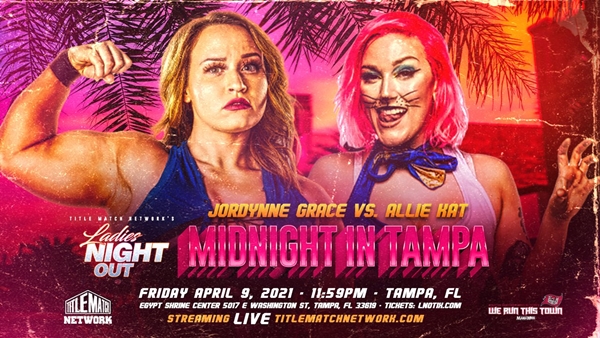 Two women who changed the game for women in the U.S. independent scene in recent times will clash at Midnight In Tampa.  Grace is a powerhouse who has competed all over the world against wrestlers of any gender.  Before going to IMPACT and winning the Knockouts Championship she was a star on the indies where she had wars with men that helped change how fans viewed intergender wrestling as her strength made her their equal in many people’s eyes.  Allie Kat has continued Grace’s work by having absolute wars with men on a regular basis in Game Changer Wrestling (GCW).  These two performers are sure to deliver an excellent match here as both are no stranger to a fight. 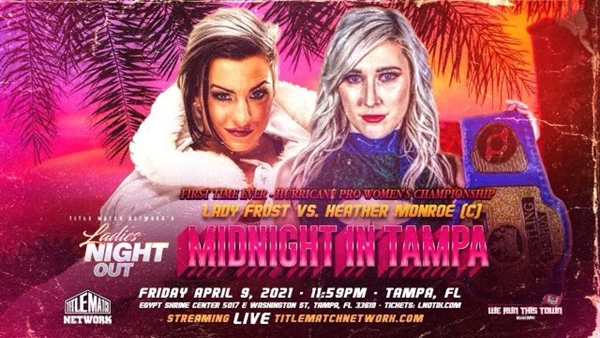 For the first time, Lady Frost takes on Heather Monroe, with championship gold on the line.  Former FWS Women’s and Sabotage champion Heather Monroe has wrestled for WWE, ROH, and AEW already in her career and has competed all over the U.S. indie scene.  2020 was a good year for Monroe and she’s looking to follow that up in 2021 by continuing to win and hold on to her gold.  Lady Frost is a name that has been catching buzz ever since her debut in 2018.  2020 looked to be her year as she was getting regular work with CHIKARA and made her return to Beyond Wrestling but COVID-19 cut off her momentum with CHIKARA closing down and Beyond running less.  She has picked up where she left off in recent times as she made her AEW debut late last year and made her GCW debut in January.  Both women are set to have good 2021’s and a win here would give them some added momentum. 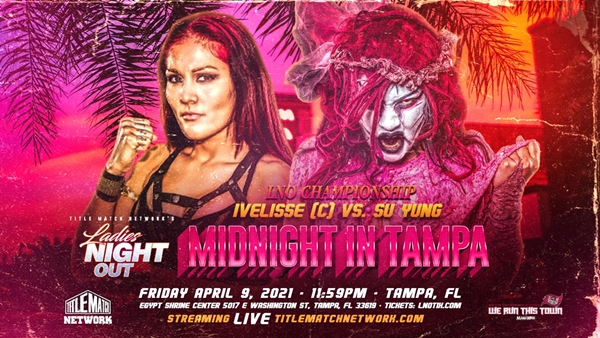 Ivelisse defends her championship against the demonic brawler Su Yung.  Yung has competed all over the world and held the IMPACT Knockouts Championship in the past.  Yung is a heavily decorated performer with 13-years of experience under her belt which has shaped her into an unstoppable and violent brawler.  Ivelisse knows whats it’s like to get violent as she is most remembered for her run in Lucha Underground.  Ivelisse is another decorated performer but she has yet to achieve success on a major stage like Su Yung has.  This is sure to be an interesting clash that could see Yung walk away as the new champion.