Last time, on ChocoPro, the Gatoh Move Pro Wrestling crew took their talents to the Pro Wrestling HEAT-UP dojo. This was an intriguing show, to say the least, as viewers saw competitors from both promotions work under the same roof. Viewers were also taken through the dojo during one of the matches, seeing everything that it had to offer. On ChocoPro #102, the action returns to the small yet eventful venue of Ichigaya Chocolate Square, though there will still be HEAT-UP representation to be seen. Here is the confirmed action set to take place. 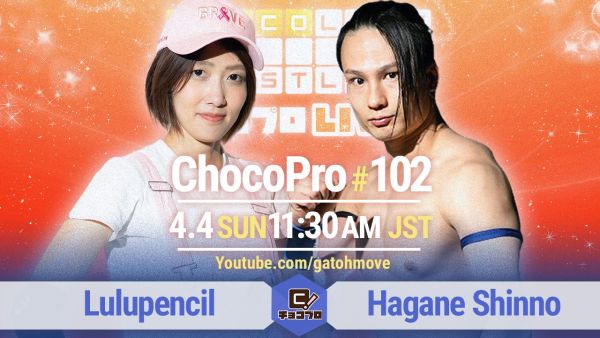 On ChocoPro #101, Lulu Pencil took on the founder of HEAT-UP himself, TAMURA. To say that this was a unique affair would be an understatement, as they battled throughout the dojo. From Lulu Pencil being trapped on a treadmill, unable to keep up with the speed, to the battle going throughout the entire dojo, it was almost like the Gatoh Move-style action had spilled out into HEAT-UP. Despite a valiant effort, the Pencil Army leader lost. Not one to back down from a challenge, on this upcoming episode, Lulu Pencil will face perhaps her greatest yet.

Hagane Shinnou is one of the performers on this show pulling double duty. It’s worth noting that Shinnou will take part in the Chris Brookes Produce Show 3, presented by DDT, where he will take part in a six-man tag team match. On ChocoPro #102, however, Shinnou will be working solo as he battles Gatoh Move’s “Final Boss” herself. What Lulu Pencil lacks in physical strength she makes up for in ingenuity and heart. Will these qualities be enough to take her throughout match, allowing her to secure her first singles victory? 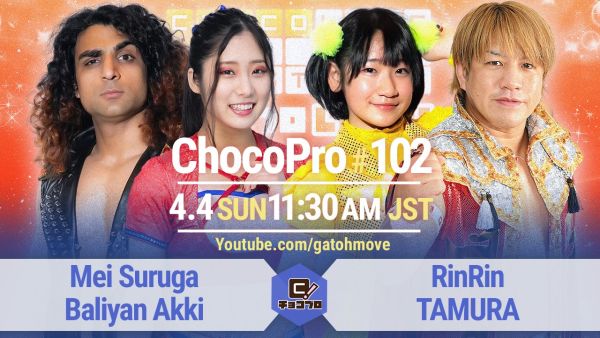 Not unlike Hagane Shinnou, Baliyan Akki will also participate in the Chris Brookes Produce Show 3, where he’ll take on long-time DDT star HARASHIMA. To say that HARASHIMA is a star in the promotion would be an understatement; among other accolades, he is a 10-time KO-D Openweight Champion. Akki competed in the previous Chris Brookes Produce Show in February, where he challenged Konosuke Takeshita. Though Akki put forth a valiant effort, he was unable to defeat the four-time Openweight Champion. On ChocoPro #102, he will work alongside fellow Best Bro, Mei Suruga, to take on the unlikely pair of Rin Rin and TAMURA.

ChocoPro #101 was a successful outing for Best Bros. In this show’s main event, the reigning Asia Dream Tag Team Champions faced Tetsuya Izuchi and Hiroshi Watanabe in a winning effort. Post-show, Gatoh Move founder Emi Sakura set the main event for this upcoming show. Seeing that TAMURA expressed interest in competing in another Gatoh Move event, Sakura decided that he would team with Rin Rin, Gatoh Move’s “Master of Ceremonies,” to take on Best Bros.

ChocoPro #102 marks the first Ichigaya Chocolate Square match for TAMURA since this past January. On episode #79, TAMURA faced, ironically enough, Akki to pick up a win. As for Rin Rin, this will be a huge challenge. Pre-ChocoPro, she teamed with TAMURA in various tag team encounters. In fact, their previous standard tag match took place in December of 2019, when they challenged Tropikawild, the team of Yuna Mizumori and SAKI, for the Asia Dream Tag Team Titles. Now that they’re reunited, Rin Rin and TAMURA will be looking to upset the current champions in this main event.