WrestleMania 37 is a little over a week away. Tonight’s episode of Friday Night SmackDown is the penultimate episode before WrestleMania, meaning much of the card for next week’s two-night event is already set. However, there is precious little time remaining to further develop some of the stories heading into next weekend. WWE have kept their cards close to their chest for tonight’s SmackDown, with only one segment announced thus far. Let’s dive in to take a look. 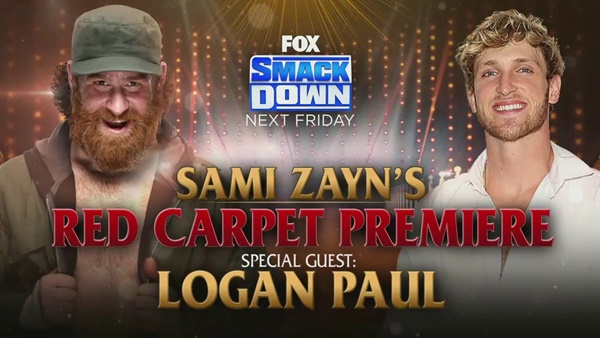 Yes, you read that correctly.  Whether you love or hate him, Logan Paul has somehow become a draw in the sports and entertainment world. Having already had a highly successful YouTube career and a short-though-largely successful (certainly in terms of finances) boxing career which will next see him fight the arguable greatest-of-all-time in Floyd Mayweather, Paul is now trying his hand in the WWE. Paul has been invited to Sami Zayn‘s conspiracy movie premiere and has clearly accepted. With news of Kevin Owens versus Sami Zayn being made official for WrestleMania next weekend, it is almost a certainty that Paul will be involved in some way. It remains to be seen in what capacity he will be used, but his appearance will no doubt draw some eyes to the match and the show. Maybe it will become clearer on tonight’s episode of Friday Night SmackDown on FOX.

– Roman Reigns, Edge, and Daniel Bryan are now the best versions of themselves. Reigns as the dominant, triumphant mega-heel. Edge as the irked “Ultimate Opportunist” with nothing to lose. Daniel Bryan as the “Ultimate Underdog” babyface with the odds stacked against him. Tonight, we can expect this feud to become even more personal.

– Cesaro saved Shinsuke Nakamura from a post-match beat-down at the hands of Seth Rollins last week. This feud will continue and we can possibly see Rollins getting the upper hand on Cesaro this week.

– Bianca Belair put Natalya away last week, before being attacked by Sasha Banks. Banks is determined to prove she remains at the top of SmackDown’s women’s division. Maybe Belair can make her reign more questionable this week.