Gatoh Move Pro Wrestling is three episodes away from the landmark one-hundredth episode of ChocoPro. Since the show began in March of last year, it has built steady momentum over time, becoming appointment viewing for many wrestling fans. Not a group to rest on its laurels, Emi Sakura and company are set to put on another solid show in the form of episode ninety-seven. For longtime viewers and newcomers alike, here is what to expect. 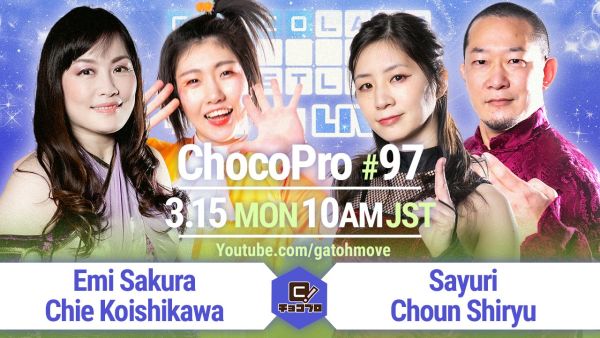 Emi Sakura and Chie Koishikawa vs. Sayuri and Chon Shiryu

In the opening match of ChocoPro #97, experience and exuberance come together as Emi Sakura and Chie Koishikawa battle the disciplined duo of Sayuri and Chon Shiryu. While Sakura won’t be teaming with the other half of Beauty as Is – we will get into this a little later – she will have an equally colorful partner in the form of “Too Much Energy,” Koishikawa. The former fencer may not have had the best of luck in recent janken tournaments, but when it comes to bell-to-bell competition, there are few wrestlers as spirited. Given that these two wrestled one another in a tag team match this past episode, to see Sakura and Koishikawa team up will be interesting.

However, their opponents will not make securing a win easy. Between Sayuri’s ninja-like evasiveness and Chon Shiryu’s kung fu specialty, multiple forms of combat are covered. The last time they teamed was back on episode ninety-three earlier this month, when they lost to the duo of Koishikawa and Tokiko Kirihara. Needless to say, Sayuri and Shiryu’s goal is to pick up a victory as a team. Will they be able to do so against the formidable team of Sakura and Koishikawa? 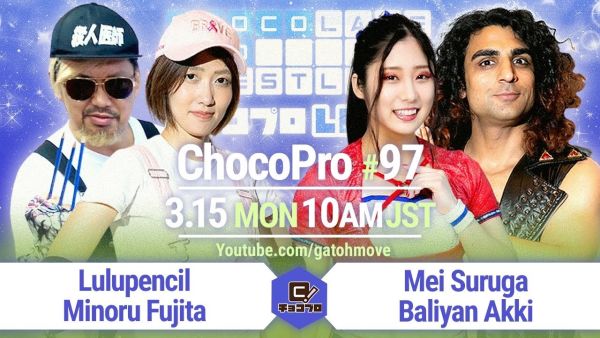 Piiiiii, Pi! Pi, Pi, Pi! Pencil Army continues to grow its numbers. Two episodes ago, the show ended in a way no long-time ChocoPro viewer expected. On episode ninety-five, Lulu Pencil teamed with Minoru Fujita, also known as “Mino Pencil,” to battle Chie Koishikawa and Lulu Pencil’s heated rival, Chris Brookes. This was a fierce match, though ultimately, it was the latter team that was victorious, Brookes tapping out the Pencil Army general in the center of Ichigaya Chocolate Square.

Following the match, Lulu Pencil confronted Chris Brookes, though not before handing him her baseball cap, the very same that he stole from her several episodes ago. From there, they had a heart to heart, Brookes expressing that he felt he didn’t belong anywhere. In response, Lulu Pencil informed him that she handed him her hat for a reason: she wanted him to join Pencil Army. After some hesitation, Brookes donned the pink cap and stood alongside former rivals. In that moment, Brookes became “Chris Pencil.”

Once more, Lulu Pencil and “Mino Pencil” will team up, this time with new opponents standing across Ichigaya. This won’t be an easy outing for Pencil Army, however, as the Asia Dream Tag Team Champions await. Best Bros, the team of Mei Suruga and Baliyan Akki, have been nothing short of dominant. Not only have they put forth solid singles efforts recently, but their tandem game continues to improve, utilizing cooperative maneuvers to bring various teams to their knees. In short, it’s easy to see why Best Bros hold the gold. With Pencil Army growing in numbers, however, Suruga and Akki’s opponents have momentum that shouldn’t be overlooked. 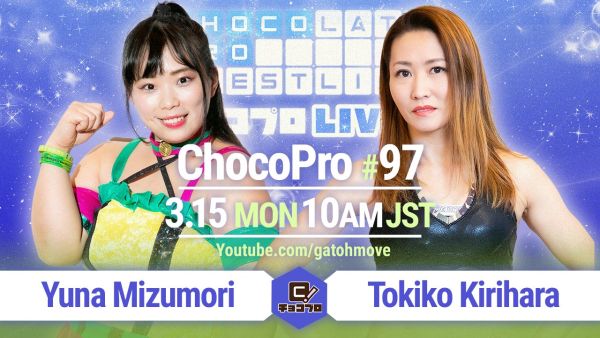 On the previous episode of ChocoPro, the Asia Dream Tag Team Champions were surprised to learn that their match, detailed earlier, wouldn’t main event this upcoming episode. Instead, Sakura decided to give this position to Yuna Mizumori and Tokiko Kirihiara, who will wrestle one another in the closing match. The founder of Gatoh Move recognized the contributions of Gatoh Move’s “Pineapple Girl” and the progress of “Otoki-san.” This, it was decided that they would main event ChocoPro #97.

The month of March has seen Mizumori team with Sakura on a regular basis; together, they became known as Beauty as Is. Keep in mind that, when ChocoPro began, tensions were high between the two. Now, several seasons later, they have become one of the more effective tandems in the confines of Ichigaya Chocolate Square. Victories over such names as Mei Suruga and Antonio Honda are a collective testament to just how well they’ve worked together. However, on the ninety-seventh episode, Mizumori will stand alone as she faces a Gatoh Move star on the rise.

On the previous episode of ChocoPro, Tokiko Kirihara battled Mei Suruga, one half of the Asia Dream Tag Team Champions, in a singles match. Though it was the “Big Apple” that won, Kirihara put forth a solid effort, keeping Suruga on her toes each step of the way. In fact, one can make the argument that “Otoki-san” has made the most progress, from a physical standpoint, out of all the fourth-generation Gatoh Move stars. One must ask the question: will this progress be enough to help her pick up a victory over the dominant Mizumori? Tune into this upcoming ChocoPro show to find out.