On March 6th and March 7th, Dragon Gate will be holding their two-day Champion Gate in Osaka event. This show has different title matches scheduled. Some matches are determined via a tournament, some revisit the past, and one will craft the future of Dragon Gate’s main event scene. Take a look at the action to come. 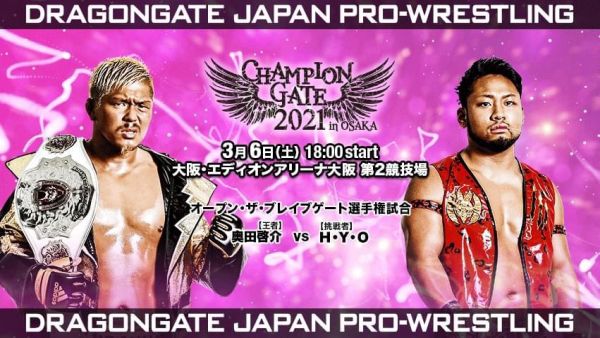 This match’s history doesn’t start when these two first crossed paths in 2019. Rather, it stems during 2016-2017, when Hyo Watanabe transformed from a young boy to a legit player in Dragon Gate. During that time, he promised he would become Open The Brave Gate Champion in the future. Watanabe even faced then-champion, and his future faction mate, Eita. Watanabe joined up with multiple young upstarts under the guidance of Masaaki Mochizuki. Under the umbrella of Mochizuki Dojo, Keisuke Okuda had left the DDT promotion to join Dragon Gate, due to his relationship with childhood best friend Ben-K.

Okuda came in and, at first, targeted Mochizuki. This led to an incident where Okuda tried to break Watanabe’s arm. Okuda eventually joined Mochizuki Dojo and tension rose between the two. This led to a three-way match with them and Kaito Ishida. Afterward, Watanabe continued his attack on Okuda. Watanabe joined R.E.D and renamed himself H•Y•O. Last year, he became a casualty of war for Okuda during his period where he was very very aggressive, chasing Kaito Ishida and the Open The Brave Gate Championship. However, they stayed distanced until this year. H•Y•O went on a big winning streak, and Okuda had no challenger yet emerge for his belt. H•Y•O low-blowed him and seemingly emerged as the next challenger. One has to wonder if H•Y•O wants the Championship or is simply angry Okuda accomplished his goal before him, and in a much shorter time. Will Okuda prove to be a strong champion, or will H•Y•O end his reign? 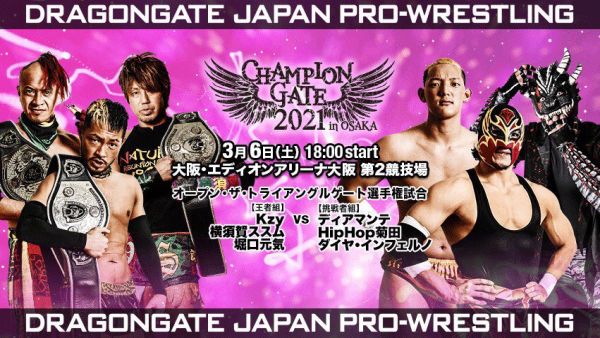 KZY, Genki Horiguchi, and Susumu Yokosuka were down in the dumps at the end of 2020. However, the trio decided it was time to bring back not only their trio but faction Natural Vibes. KZY lacked confidence, but Genki and Susumu still believed in his ability to be a leader. The group reformed and immediately captured the Open The Triangle Gate Championship, before adding Taketo Kamei and U-T to their ranks. However, they remained unchallenged for their belts. That was, until there was a number one contender’s tournament set up. This saw HipHop Kikuta, Diamanté, and Dia Inferno shockingly come away with the win. This trio has something to prove as Kikuta and Inferno have just seemed to be extra bodies in the group. However, with Diamanté looking for a mask vs. mask match with Bokutimo Dragon, will he be able to focus and capture the gold with his team or will Natural Vibes dance their way to another win? Find out at Champion Gate in Osaka.

Takashi Yoshida was formerly a member of R.E.D. until he was kicked out after miscommunication with SBKENTo. Afterward, he asked his senpai, Masaaki Mochizuki, to teach him pro wrestling. Mochizuki was skeptical by this, as Yoshida turned on him in the past. However, they put it together. From there, they won a tournament to crown new contenders for the Open The Twin Gate Championship. They punched their ticket to the title match in Osaka. KAI and BxB Hulk have mocked the duo, especially Yoshida, labeling him as a comedy wrestler. While Mochizuki did score a win over Hulk in a tag match, things haven’t gone well for Mochizuki and Yoshida. Consider that Yoshida has been on the receiving end of loss after loss in tag matches. With KAI deep in his blood feud with YAMATO, will he lose focus on the Twin Gate titles, or will Yoshida’s losing issues continue at Champion Gate in Osaka?

The Open The Dream Gate Championship match that’ll main event day two isn’t a standard title match. More so, it is a battle for the future of Dragon Gate and, of course, the belt itself. Kaito Ishida debuted in 2015, and Shun Skywalker in 2016. Both had very different career paths, as Skywalker seemed always destined for greatness. Meanwhile, Ishida had to work a little harder to climb up the ladder. For a moment, it seemed Ishida was ahead, as he captured the Open The Brave Gate Championship. During that time, Skywalker had eaten loss after loss and sent himself on an excursion to Mexico. Ishida had been a dominant champion while Shun was gone, holding the belt for nearly a year. Skywalker came back with a vengeance, aiming straight for the Dream Gate Championship.

As Kaito Ishida lost his belt to rival Keisuke Okuda, Shun Skywalker had defeated Eita for the Open The Dream Gate Championship. Skywalker and Ishida didn’t interact much throughout 2020, but in 2021, things changed. During the Twin Gate Contendership tournament, Ishida picked up the win over Shun’s Masquerade group, Ishida stated he didn’t enter the Twin Gate Contendership tournament because he wanted the Dream Gate. Ishida followed up by saying that if Skywalker was the ace of this company, Dragon Gate has dark times ahead. Skywalker accepted his challenge and they have been at it ever since then. The story to watch out for is Ishida targeting Skywalker’s leg, softening it up for his Ankle Lock submission. Will Shun’s leg fail him or will he continue to fly over the sky as Open The Dream Gate Champion? Find out at Champion Gate in Osaka.