This weekend, Game Changer Wrestling is set for action in Atlantic City, New Jersey with Take Kare. Yes, the name isn’t a request; it’s an event. GCW will be making their return to New Jersey at this event, providing fans with action featuring well-known and on-the-rise stars across the independent scene. There will be plenty of action to come, as evidenced by the following card. It’s also worth noting that this show will be part of a doubleheader alongside Hybrid Wrestling‘s Let It Ride event. Take a look at the matches set to take place, as well as a few highlights to help prepare for GCW Take Kare. 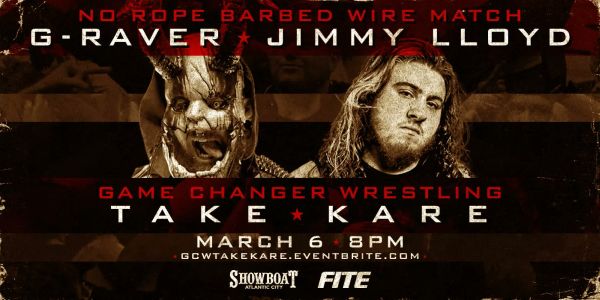 The Stakes Rise Between G-Raver and Jimmy Lloyd

The feud between G-Raver and Jimmy Lloyd, which goes back all the way to 2019, will reach a new level of violence at GCW Take Kare. At 2 Cups Stuffed, the co-promoted event between GCW and Black Label Pro, they competed in a Doors, Ladders, and Chairs Match. An errant brainbuster by Lloyd from atop a ladder caused G-Raver to collide with a series of light tubes. This resulted in a long road to recovery, as well as festering revenge, on the part of G-Raver. Last year’s Nick Gage Invitational saw him return to GCW, embracing Lloyd before immediately turning on the “Different Boy,” lighting him ablaze. Suffice to say, G-Raver didn’t forget about the time he lost, which he blamed Lloyd for.

This led to an I Quit Match between the two at GCW Good Riddance this past December. In his first GCW match in several months, G-Raver defeated Lloyd. However, if fans believed that this is where their feud would conclude, they would be mistaken. One of the first bouts announced for Take Kare was a No Rope Barbed Wire Match in what has become the most violent feud in current-day Game Changer Wrestling. The name of the match alone should be enough to unsettle anyone. However, for men that are known for deathmatches and throwing caution to the wind, this would be another day at the office. Regardless of who emerges victorious, G-Raver and Jimmy Lloyd will leave it all in the ring in Atlantic City. 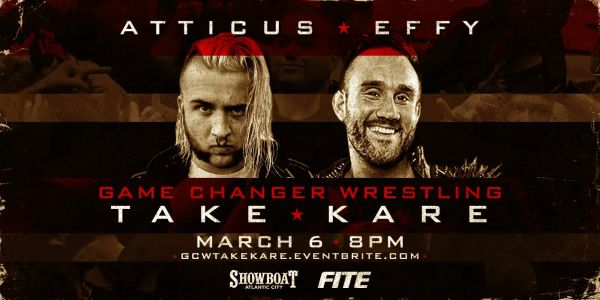 Atticus Cogar and EFFY Do Battle

This past February, on Twitter, Atticus Cogar put out a video targeting EFFY. “Silver Teeth Satan,” as Cogar is also known, expressed what he believed to be wasted potential on EFFY’s end. Cogar found it confusing how, to him, EFFY latched onto those that didn’t benefit him. He listed names including Matthew Justice, Mance Warner, and the Second Gear Crew in general. Thus, Cogar offered EFFY the opportunity to join the 44OH. Would EFFY trade in his vibrant attires, complete with spiked jackets, for the green and black of the 44OH? Days later, EFFY provided his own snappy yet profanity-laced response. In short, EFFY would not join the group. Instead, he would enter GCW Take Kare with the intent to defeat the young, loudmouth upstart in Cogar.

This won’t be the first time that Cogar and EFFY have faced off. Refer to GCW Keep in Touch, back in August; on this night, Cogar and GCW World Champion Rickey Shane Page teamed up to take on EFFY and Allie Kat. Though EFFYKat put forth a valiant effort, they eventually fell to the 44OH. However, GCW Take Kare marks the first time that Cogar and EFFY will meet in singles competition. This should be a heated encounter, especially given EFFY’s less than gracious declination to join the 44OH. Will this prove to be his undoing or will “The Weapon of Sass Destruction” serve humble pie to Cogar in Atlantic City? 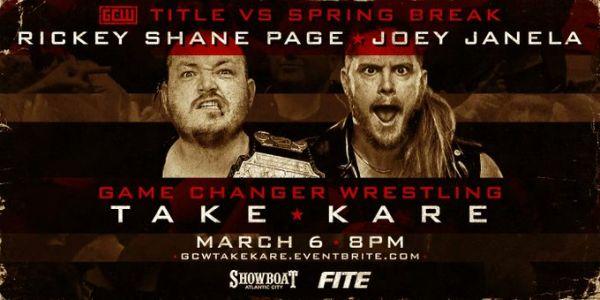 The Fate of Spring Break Decided at GCW Take Kare

Since 2017, Joey Janela’s Spring Break has been a Game Changer Wrestling institution. It marked the beginning of the season and, more importantly, a time to get excited for professional wrestling. In 2021, however, Rickey Shane Page and the 44OH look to buck tradition in their own way. The challenge was made: at GCW Take Kare, Page will defend the GCW World Championship against current AEW star Joey Janela. If “The Bad Boy” wins, he will become the GCW World Champion. If Page wins, not only will he retain the title, but the 44OH will take complete control of this year’s Spring Break.

Keep in mind that, with the latter stipulation, everything related to Spring Break will be transitioned to the 44OH. Booking obligations, profits, and trademarks are among the various assets that Janela would have to transition to the nefarious stable. They would be able to make the matches, set the rules, and moreover, rake in the lion’s share of the money brought in. However, Janela will not go into this match at Take Kare without concessions of his own. During the match, if any members of the 44OH physically attack Janela, Page would forfeit the GCW World Championship and never again receive an opportunity to fight for it.

Just as interesting as the possibility of Joey Janela not being attached to Spring Break this year is the GCW World Championship itself. At over 450 days, Rickey Shane Page is the longest-reigning champion in the title’s history. Keep in mind that, prior to Take Kare, Page has only defended the title five times. On the flipside, Janela last held the GCW World Title in June of 2015, when the company was known as Jersey Championship Wrestling. Janela boasts a 204-day reign; he successfully retained against the likes of Chris Dickinson, Chris Sabin, and Nick Gage before ultimately dropping the title to Tama Tonga. At GCW Take Kare, the fate of Spring Break hangs in the balance.

GCW Take Kare will take place at The Showboat in Atlantic City, New Jersey on March 6, 2021.

Stay tuned to the Last Word on Pro Wrestling for more on this and other stories from around the world of wrestling, as they develop. You can always count on LWOPW to be on top of the major news in the wrestling world, as well as to provide you with analysis, previews, videos, interviews, and editorials on the wrestling world. GCW Take Kare is set to air on Saturday at 8 PM EST on FITE.tv.