One episode removed from the season six premiere, ChocoPro is about to be rocked. Gatoh Move Pro Wrestling is no stranger to bringing in big wrestling stars from around the world. From inaugural AEW Women’s World Champion Riho to the lethal Minoru Suzuki and beyond, Ichigaya Chocolate Square has seen its fair share of star power. With that in mind, is Gatoh Move ready for what’s to come? Take a look at the action set for episode ninety-two of ChocoPro.

As announced on the previous episode of ChocoPro, Tokiko Kirihara will battle Baliyan Akki in singles competition. It has been quite some time since “Otoki-san” faced one-half of the Asia Dream Tag Team Champions solo. Their last one-on-one encounter took place on episode sixty this past November. Despite a hard-hitting, valiant effort on the part of Kirihara, it was Akki that emerged victorious on this show. This wasn’t to say that Kirihara went down without a fight. In fact, among all the fourth-generation Gatoh Move stars, Kirihara may be the most formidable against Akki. Making her season six debut, can the hard-hitting Showa Era enthusiast start things right with a win? This will be a preliminary match to keep an eye on.

Mei could be in big trouble! We're seeing more and more of @chie_gtmv's fierce side! #ChocoPro #gtmv

Episode ninety-one of ChocoPro marked arguably the biggest battle of Chie Koishikawa’s young career. On this episode, the girl with “Endless Energy” teamed with the silent, deadly striker known as Hagane Shinnou to battle Best Bros for the Asia Dream Tag Team Championship. During this fight, Koishikawa put forth her mightiest effort yet, almost pinning Mei Suruga on numerous occasions. Despite her best efforts, however, Koishikawa fell victim to tandem offense by Best Bros. Not one to let a loss keep her down, Koishikawa moves on to episode ninety-two to battle a mentor of sorts in Sayaka Obihiro. The “Blue Heart” of Gatoh Move has teamed with and faced Koishikawa on numerous occasions. Needless to say, a victory over her elder would grant Koishikawa a significant confidence boost for the rest of the season. 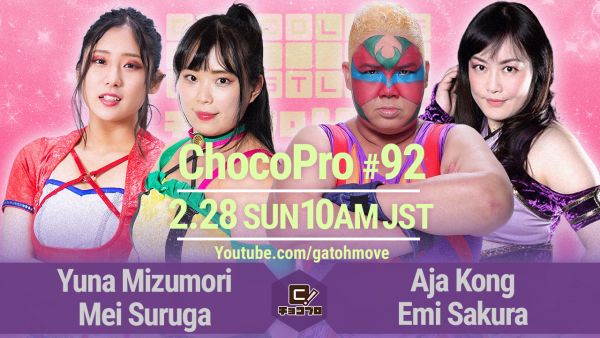 To call this ChocoPro tag team main event big would be an understatement. It’s fair to say that Yuna Mizumori and Mei Suruga are two of the biggest stars in Gatoh Move. Though they have had numerous battles against one another, over time, they developed a mutual respect. When it comes time for them to work together, they’re able to blend their strengths. Mizumori’s power and Suruga’s agility make for a lethal combination. Though Suruga is currently Asia Dream Tag Team Champions alongside Baliyan Akki, one may argue she could make a solid, consistent team with Yunamon as well. On this upcoming episode, their partnership will be put to the test.

On one side of the equation stands Emi Sakura, who suffered a brutal defeat in the AEW Women’s World Championship Eliminator Tournament semifinals recently. She put forth an excellent effort against Yuka Sakazaki, even having Mizumori and Suruga use their nefarious antics for her benefit. Nonethless, Tokyo Joshi Pro Wrestling‘s “Magical Girl” moved onto the Japan finals. On the previous episode of ChocoPro, Sakura teamed with fellow Pencil Army member Lulu Pencil. On this episode, Sakura will take things up a notch by joining forces with a joshi puroresu legend, who will be making her Gatoh Move debut.

Aja Kong is one of the most well-known names in Japanese wrestling. Having wrestled since 1986, Kong has left multiple bodies in her wake, amassing countless achievements in All Japan Women’s Pro Wrestling, OZ Academy, among other organizations. Though she has wrestled since before many modern fans were alive, Kong continues to work to this day. The legendary powerhouse was also part of the AEW Women’s World Championship Eliminator Tournament; though she dominantly put down Rin Kadokura of Marvelous in the first round, she lost to Ryo Mizunami in the semifinals, albeit by count-out. It’s safe to say that Kong will bring her anger from being eliminated into this upcoming tag team bout.

This main event will be a clash between joshi puroresu’s future and its storied past. Can Mizumori and Suruga defeat their legendary peers? Will it be Sakura and Kong that emerge victorious? If so, it will mark Kong’s first win in not just ChocoPro but Gatoh Move as a whole? Tune into episode ninety-two to witness this promising encounter.