All wrestlers have to start somewhere on the path to making their dreams a reality, whether it be a wrestling school, church basement, bingo hall, etc. From there, those wrestlers work their way up to the pinnacle of their dreams. For many, that’s a career in WWE or more recently AEW, IMPACT Wrestling or even NJPW. But sometimes the journey is just as important as the destination. In this week’s edition, we take a look at the charismatic AEW star with swagger for days, “Absolute” Ricky Starks.

“The revolution is televised.” If there is one AEW star that is the definition of charisma, it would be Ricky Starks. Since debuting for All Elite Wrestling back in June, “Stroke Daddy” has made a huge impact, even aligning himself with Team Taz. Starks is currently part of one of the most prominent groups in the company. Even so, he is all but destined to become a major star on his own. To better understand where the “Absolute” AEW star is now, it’s important to go back to the beginning.

The Beginnings of Ricky Starks

Born in New Orleans, Louisiana, Ricky Starks grew up a professional wrestling fan. He watched it along with his brother and sister, knowing at a young age that he would want to become a wrestler as well. He began his career in the early 2010s, his first televised match taking place in August of 2012. On an episode of SmackDown, alongside Robbie Barnes, Starks served as enhancement talent against WWE Superstar Jinder Mahal. Starks would make multiple appearances on WWE programming throughout his career.

Later in the year, Starks began to appear for various promotions in the Texas area. The most prominent of these was the National Wrestling Alliance Velocity. In his first NWA Velocity match, Starks competed in the second-to-final match at their Haunted Havoc event. Starks would appear for other NWA affiliates, as well as Anarchy Championship Wrestling, before 2012 included. It was in ACW where Starks saw much of his indie success.

Heading into 2013, Ricky Starks found himself working across the independent scene in Texas, organizations such as Inspire Pro Wrestling included. His first match of 2013 took place for NWA Houston, where he challenged Mike Dell for the NWA Lone Star Junior Heavyweight Championship. Though he wouldn’t win on this night, he went on to claim the belt in July, besting Raymond Rowe, currently known as Erik in WWE. The next month, Starks dropped the title to Rudy Russo. Starks closed out the year in the ACW Heavyweight Championship scene. 2013 also saw Starks team regularly with Ken Carson; collectively, they became known as Absolute Arrogance. It’s also worth noting that he would also appear on WWE programming as an extra. Most notably, he portrayed a victim of Ryback and his bullying antics.

In 2014, Starks became a more prominent name on the independents, even outside of Texas. From Illinois to West Virginia to even Canada, “Stroke Daddy” had no shortage of hustle. He even worked dark matches for Dragon Gage USA and EVOLVE. Starting in May of that year, Starks became a prominent competitor for Canadian Wrestling’s Elite, based in Winnipeg. During this year, he worked with such names as current New Japan Pro Wrestling star Chase Owens; in CWE, they faced each other for the NWA World Junior Heavyweight Championship. The following November, Starks tasted his next dose of success when he beat Barrett Brown for the ACW Hardcore Title.

In January of 2015, Starks would unify the ACW Hardcore and Heavyweight Titles, the latter of which was held by MASADA. With this, Starks became the undisputed ACW Unified Champion. In the months that followed, Starks defended the title against Rowe, Aaron Solow, ACH, and others. In May, Starks and Carson became the first-ever VIP Tag Team Champions; they would hold the titles for 245 days. The following August, Starks added more gold to his collection when he defeated Andy Dalton for the Inspire Pro Championship. However, during ACW’s 10th Annual Lone Star Classic tournament, Starks lost the Unified Championship to finalist Jojo Bravo. As the inaugural ACW Unified Champion, Starks holds the longest reign at 301 days.

Throughout 2016, Starks continued to work the indie scene. He also made a WWE Main Event appearance in August of that year, losing to Kane. The year 2016 also saw Starks debut for Imperial Wrestling Revolution, based in Oklahoma, eventually winning their Revolutionary Championship in September. Additionally, Starks regularly teamed with Solow; AEW DARK fans would become familiar with the latter throughout the summer, fall, and winter of 2020.

Ricky Starks started 2017 strong by defeating Darin Childs for the ACW Televised Championship. Starks would remain the champion throughout the year, overcoming Kody Lane, Marcus Rose, and others along the way. Starks boasts the longest reign with the title, as of this writing, at 651 days. In October, Starks added more tag team gold to his resume when, alongside Solow, he won the WrestleCircus Big Top Tag Team Championship.

In January of 2018, Starks made yet another WWE appearance, this time on Monday Night RAW. He teamed with Solow in a losing effort against The Revival, currently known as FTR in AEW. Out of this, Starks’ work on the indie scene continued, from ACW to Dojo Pro Wrestling to DEFY Wrestling and beyond. In October, Starks made his National Wrestling Alliance return at the NWA 70th Anniversary Show. He took part in a four-way elimination match that was ultimately won by Willie Mack. This wouldn’t be the last time Starks would appear on NWA programming, either.

From Powerrr to Dynamite

In the spring of 2019, Starks took part in his first tour of Japan with Dramatic Dream Team. From mid-April to mid-May, Starks worked with DDT stars including Antonio Honda, Daisuke Sasaki, and Tetsuya Endo. By the fall, however, “Stroke Daddy” would become a regular competitor for NWA Powerrr, the National Wrestling Alliance’s YouTube wrestling show. Starks’ charisma and in-ring skill made him one of the most popular stars on the show, allowing him to ascend the proverbial NWA ladder.

This came to a head in January of 2020, at the NWA Hard Times pay-per-view event. He won the NWA World Television Title Tournament, becoming the first titleholder in close to two decades. Starks would drop the title to Zicky Dice later that month. A few short months later, the COVID-19 pandemic hit, resulting in many wrestling companies canceling or postponing shows. The following June, Starks received his next big opportunity with AEW. On an episode of AEW Dynamite, Starks challenged then-TNT Champion Cody Rhodes. Despite coming up short in this encounter, it would lead to him signing a full-time deal with the company.

By July, Starks aligned himself with Taz and FTW Champion Brian Cage, becoming the newest member of Team Taz in the process. He would also enter a brief feud with Darby Allin, mocking the future TNT Champion at every opportunity. In addition to Dynamite, Starks has made several appearances on AEW DARK, often coming out the victor in singles and tag team matches alike. With teammates such as Cage and Powerhouse Hobbs, one can’t fault Starks for maintaining his trademark swagger. 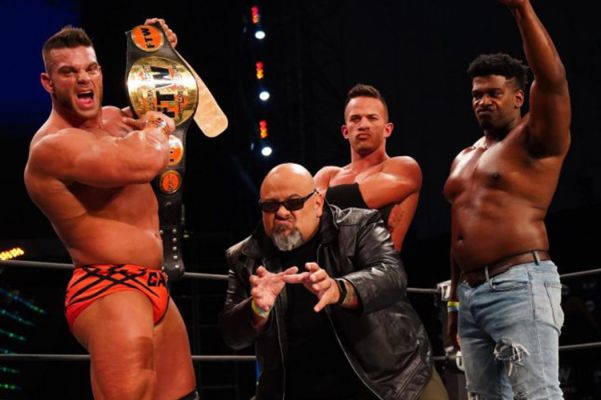 The “Stroke Daddy” is All Elite, with no signs of this changing anytime soon. Interestingly enough, in an interview with Chris Van Vliet, Starks revealed that he received a call from WWE the same day he debuted for AEW, the former expressing interest in bringing him in. Though Starks worked multiple enhancement matches for WWE, several months later, it’s evident AEW was the best option. While the wrestling world is still early into 2021, when it comes to future top stars in AEW, it would be tough to bet against “Absolute” Ricky Starks.

Jay White Returns To NJPW
The Return Of Captain Charisma: A Look At Potential Feuds For Christian