Pro Wrestling NOAH is starting the year off strong with three GHC Championship matches already confirmed. There should be some interesting bumps in the road to Nippon Budokan. 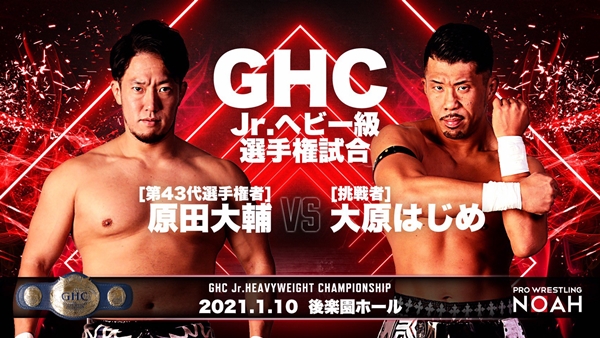 This championship match was announced at the Sugiura Gun: All Dogs Gather Event. As Hajime Ohara challenged his rival Daisuke Harada for the GHC Junior Heavyweight Championship. With Harada then accepted stating he was waiting for Ohara to challenge. Hajime noted that the chaotic NOAH juniors scene was messy and that he needed to be the one who controlled it. That’s why he challenged Daisuke Harada. Daisuke Harada got the win in their preview match at the January Fourth Korakuen Event. So that leaves the world wondering will the unofficial ace of the NOAH junior division emerge still champion? Or will Hajime Ohara win the Junior Heavyweight Championship for the first time in nearly four years? 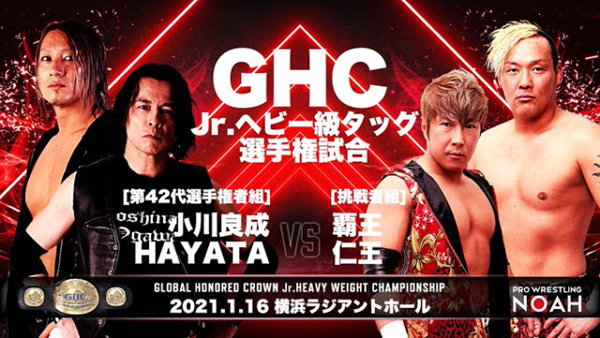 This match is coming together as a result of what happened at the January Fourth Korakuen Event. When Nioh pinned one half of the GHC Junior Heavyweight Tag Team Champions HAYATA. Afterwards, Nioh demanded HAYATA and Yoshinari Ogawa defend against himself and Haoh. HAYATA, who usually doesn’t speak a lot, then grabbed a mic and accepted the challenge. Labeling both as uniform wrestlers. They have a preview tag match coming up. With both teams looking to get their momentum rolling. However, will HAYATA and Yoshinari Ogawa’s ongoing problems with Kotaro Suzuki, NOSAWA Rongai, and Ikuto Hidaka distract them? Costing them the Junior Tag Team Championships in the process? Or will their dominance continue and they knock Haoh and Nioh off like the rest of their previous challengers? 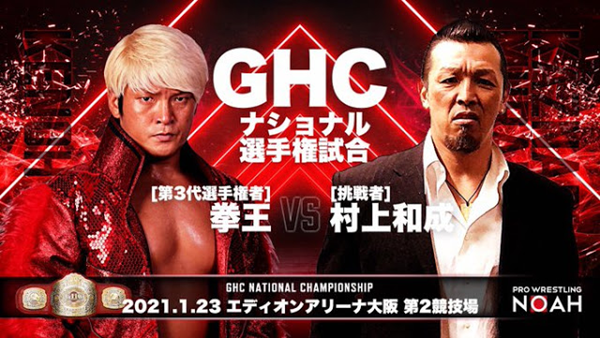 Questions emerged about who would be the newest member of Sugiura Gun when they were set to do battle with Kongoh at the end of 2020. The fans were in an uproar when it was revealed to be Kazunari Murakami. A man touted as one of the most scary and vicious competitors of all time. Many thought he would be connected to Katsuhiko Nakajima and Masa Kitamiya due to him torturing the two in their younger days. That was indeed the case for a small moment. That’s until the January Fourth Korakuen Event. Where Murakami shocked the NOAH fans by making GHC National Champion Kenoh pass out in a sleeper hold. Then after the event, it was announced Murakami would challenge Kenoh for the GHC National Championship. Could Kenoh’s dream of going to the Nippon Budokan as the National Champion be in danger? Or will just be another mountain for him to climb?