The past few weeks have been huge for NXT UK, from the five star classic over the NXT UK Championship between WALTER and Ilja Dragunov, to the crowning of the inaugural NXT UK Heritage Cup Champion in the form of A-Kid just last week. As for this week, things appear to be toned down a tad, however, the brand will no doubt look to end 2020 as they mean to go on – on a high note.

This one’s been building for a good few weeks, and now, it all comes to a head between two of NXT UK‘s top tandems. After his elimination from the first round of the Heritage Cup Tournament at the hands of its eventual winner, Flash Morgan Webster was found laid out backstage, an attack later revealed to be orchestrated by Eddie Dennis. ‘The Pride of Wales’ had enlisted The Hunt (Primate and Wild Boar) to take out the former NXT UK Tag Team Champion, with his allegiance to Pretty Deadly (Sam Stoker and Lewis Howley) hanging in the balance. For The Hunt, though, this is their biggest opportunity in NXT UK to date. As former Tag Team Champions, and an appearance on Monday Night Raw under their belts, Flash Morgan Webster and Mark Andrews are one of the teams to beat in WWE‘s United Kingdom brand. A win over South Wales Subculture is exactly what Primate and Boar need to propel them towards a crack at the titles currently held by Gallus (Mark Coffey and Wolfgang). 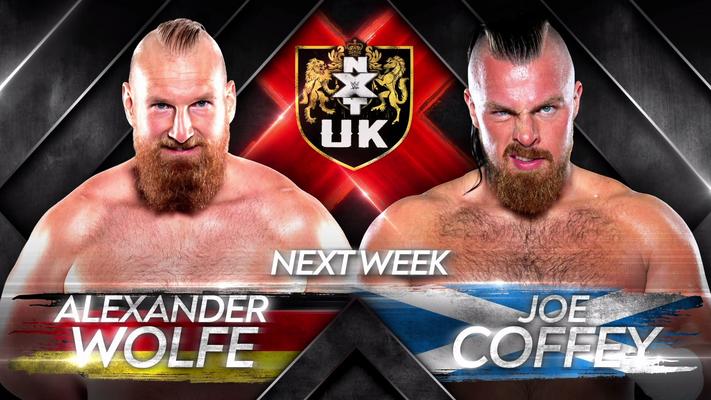 Since returning to NXT UK, Joe Coffey – and the rest of Gallus, for that matter – has drawn the ire of Alexander Wolfe, and now, a match has finally been signed between the two for tonight’s edition of NXT UK. ‘The Iron King’s’ first night back on the job saw he and the Gallus boys successful over the team of Pretty Deadly and Sam Gradwell, with the German wrestler then confronting the Scottish trio backstage. Of course, Wolfe and Coffey are no stranger to one another, due to Coffey having previously challenged Wolfe’s Imperium partner WALTER for the NXT UK Championship at the start of this year. Now, though, it appears as if the artist formerly known as Axel Tischer has gone into business for himself.

After failing to make it to the finals of the Heritage Cup Tournament, Noam Dar has come up with a new plan to make himself known throughout NXT UK. Coming soon to Thursday evenings – ‘The Scottish Supernova’ presents Supernova Sessions. NXT UK‘s first chat show segment, the inaugural Cruiserweight Classic competitor will be chatting to whoever he pleases, all in a bid to prove to everyone why he’s the number one star on the roster.