November rolls around again. Thus, it is almost time for one of Dramatic Dream Team‘s biggest shows of the year: Ultimate Party 2020. It was a rocky road to get to this point but now it’s time to celebrate. What a celebration they have on deck, between title matches and personal feuds being settled. Here is the confirmed card for the show.

DDT's biggest show of the year will be available worldwide and LIVE on #wrestleUNIVERSE!

The first match is between two of the more inexperienced members of the DDT roster. Keigo Nakamura has been around for a while and has been a part of some pretty noteworthy comedy spots so he’s taken a little bit of the limelight in the terms of the future. However, the member of Junretsu in Hideki Okatani has seemingly limitless potential. He has gotten better, slowly but surely, over the course of the year. This may be a rematch but it’s an interesting way to see how they’ve grown.

Hiroshi Yamato and Hoshitango vs Mizuki Watase and Yukio Naya

This match is interesting. Not only does it feature the return of Hoshitango, but also a fraction of DAMNATION vs Junretsu. This largely depends on which part of the DAMNATION war viewers believe is right. Either way, Hiroshi Yamato is best known for his time in Ganbare Pro and has recently been popping up in the DDT TV Show as Daisuke Sasaki‘s ally. Mizuki Watase and Yukio Naya have been DDT mainstays, with Naya being able to keep up with champions in recent months. This should be a solid match. 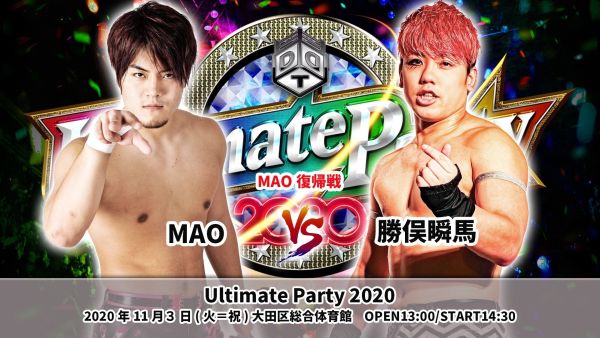 The first match on Ultimate Party 2020‘s main card is MAO’s return match. His opponent is ALL OUT‘s Shunma Katsumata, who has recently been making a name for himself in Big Japan Pro Wrestling (BJW). He has become a much stronger and versatile wrestler than he once was after finding his niche. Additionally, with MAO coming back from injury, this could prove to be a difficult return. However, it should be an entertaining and fast-paced showing all the same.

Danshoku Dieno has been on a bit of a slump. While he’s won matches, he hasn’t felt the same. He has blamed it on his creativity being missing. That spark that was once there has faded. Enter one of the EVPs of Cyberfight, Akito, who has been having a resurgence ever since gaining his title. He looked up to the once creative genius in Dieno and challenged him to this match in a last-ditch effort to help him find this spark of creativity in wrestling again. 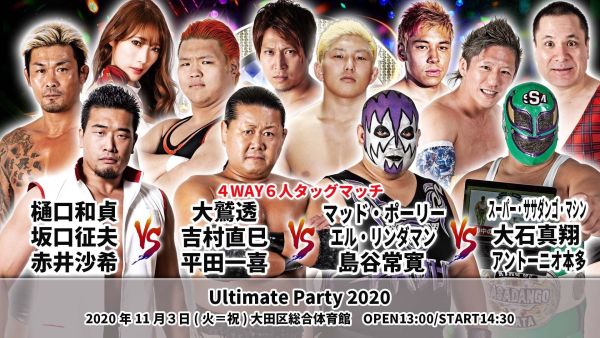 Eruption has officially become the kings of the tag division after defeating Nautilus, holding both the KO-D Six and KO-D Tag Belts with neither belt having a clear challenger. With that being the case, it makes sense that every team is gunning for them. From the Disaster Box team who wants another shot after coming so close to #DAMNHEARTS who Eruption! won the titles from earlier in the year, to the unpredictable team headed by Antonio Honda who was a part of Eruption!’s first defense. Anything could happen in this match. 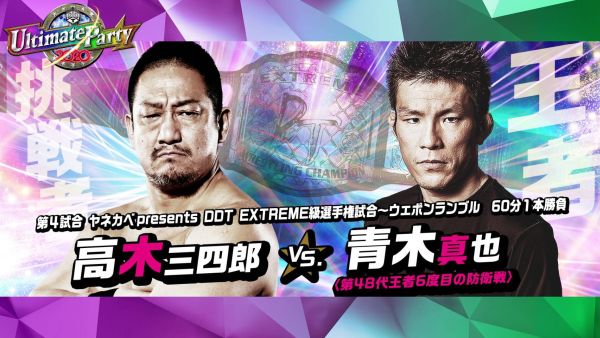 The Extreme Title; what an unpredictable belt. Oftentimes, the stipulation wouldn’t be known until the day of the show. However, this one has been hyped and it makes sense. Shinya Aoki will face the president of Cyberfight Sanshiro Takagi in a DDT staple: the Weapons Rumble. This is similar to a battle royal, except with every timed interval, a new weapon chosen by the competitors will arrive. This can be literal or as loose as they like, leading to very unique situations for this DDT staple. This usually favors Takagi, but with enough creativity or will, Aoki can come out on top. 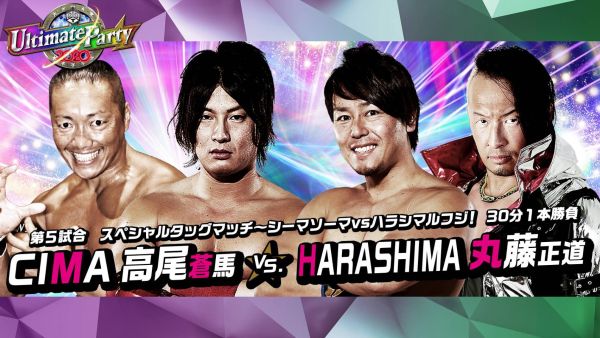 This match was originally meant for Peter Pan 2020 before the lockdowns threw everything into chaos. This match has been teased and fans wondered if it would ever take place. Recently, it was confirmed to take place at Ultimate Party 2020. CIMA and Soma Takao have been shown to be on the same page. Takao brought out his old high school gimmick of BIMA in a recent match. At the same time, HARASHIMA and Naomichi Marafuji have been proven to be a tough team as the two aces of their respective companies. Despite the seemingly thrown together nature of the teams, they all seem to be on the same page. Will the experience of HARAFUJI win out or will the hunger of a young talent outshine all? 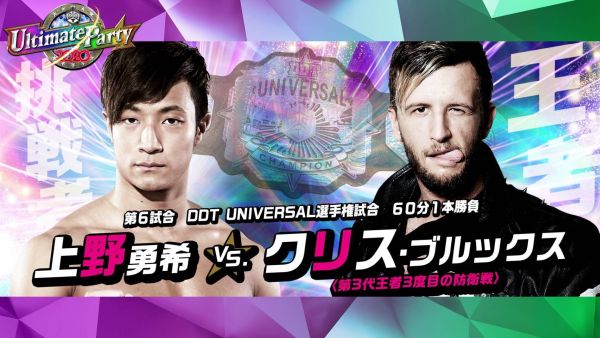 This match stems from Chris Brookes and Drew Parker challenging Nautilus for the tag titles. Naomi Yoshimura got the pinfall and challenged Brookes for his belt. It was a failed attempt, but after the match, Brookes ran down Yoshimura as weak. This led to Ueno stepping in to challenge the titleholder. Thus, the match was made for Ultimate Party 2020. Brookes has taken every chance to get into Ueno’s head, including pretending Nautilus was dead and handing Ueno flowers when a break between the teammates was announced. October hasn’t been a great month for Ueno, losing both the tag titles and a shot at the six man-titles when it was thought he was a favorite to walk out with three belts, one being the Universal. Brookes looks to continue holding onto the Universal Title and avenge the loss of the tag titles. 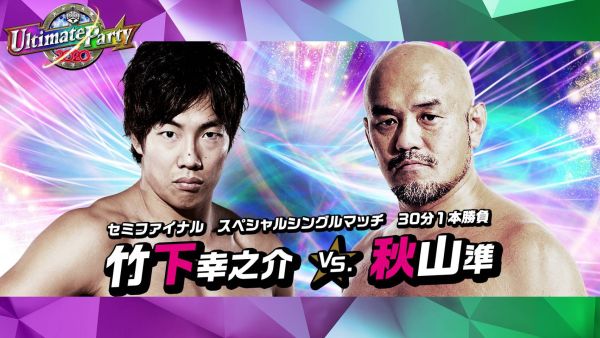 This rivalry stems back all the way to the end of the first run of the DDT TV show in the summer. Not long after Akiyama’s debut, ALL OUT took exception to the new then-unnamed stable and challenged them to a war match. The competitive rivalry raged on, leading to the two leaders in Jun Akiyama and Konosuke Takeshita deciding to settle things in a singles match at Ultimate Party 2020. Will this be the final match of the rivalry? Regardless, they have been improving their in-ring performances in preparation for this match. In particular, Takeshita debuted his new finishing move, the Exaggerated School Boy. This is going to be a strong match. 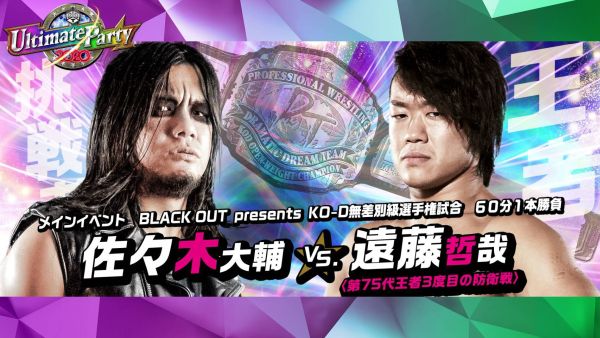 As the winner of the King of DDT Tournament, Tetsuya Endo was allowed to name the challenger for his belt at Ultimate Party 2020. He originally named Kenny Omega, but travel restrictions rendered this impossible, so he named the other person he had to beat: Daisuke Sasaki. Originally a friendly match between DAMNATION members, tensions rose and Sasaki demanded that Endo be kicked out of the stable. Unfortunately, the other members had other intentions and they all turned on Daisuke, instead naming Endo as the leader. After a later beatdown, Endo radically changed the ideals of DAMNATION, leading Sasaki to proclaim that he was the group’s only member.

At Ultimate Pary 2020, the title remains on the line. However, there is an added self-imposed stipulation. Sasaki promised if he lost, he would quit and work in another country, working three days a week and not morning shifts. This isn’t the first time he’s made a threat like this, but after such a personal rivalry, maybe this time he’s serious.