One of the wrestlers highlighted in the Best of DDT series was the EVP of Cyberfight, Akito. A man who never really reached the top of the mountain, Akito held the DDT Extreme Title three times. All the while, he produced impressive and eye-catching matches. These broke the mold of the usually comedic belt. This opened the way to some of the most intriguing matches to take advantage of the unique opportunities given by the belt. To exemplify this instance, three of Akito’s DDT Extreme Title matches will be highlighted. 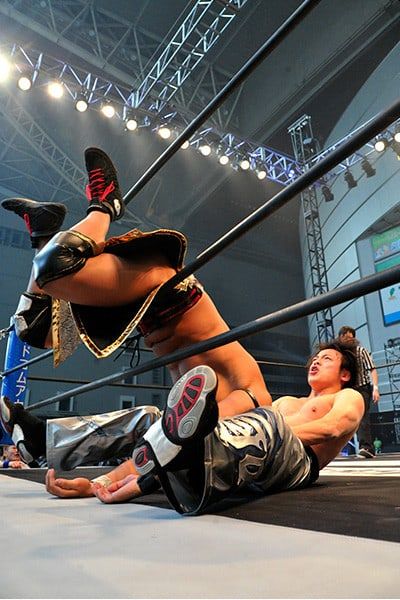 On his six defense of the title at Saitama Super 2015, Akito faced Shiro Asahi, who was known as X. The match stipulation was known as the Rules Rumble, the gimmick being that after a timed interval, the rules of the match would change. This would go from Striking Only to Tag Team to Ring Out would be a loss and everything in between. The ability for these two to switch mindsets on the fly was not only an amazing feat. On top of this, they were able to construct a story. This led to a shocking finish, an upset with Asahi winning the title.

The rematch from the Super Saitama encounter, at Judgement 2015, this match took place with Akito as the challenger. They were given ten minutes in the ring; whoever had the most total falls would be the winner (Ex. a one-count would be worth one point, a two-count worth two points, a three-count worth three, etc.) It ended in a draw at 17 points apiece. The match went into overtime with the first person to get a one-count winning the title. They would go on wrestle for another minute and thirty seconds knowing that the moment the other got a one-count, the match would end. Akito would reclaim the title and go on to hold it until July.

This match has been mentioned in passing many times before in other articles, but it deserves its own look. At Peter Pan 2019, ASUKA challenged Akito for the DDT Extreme Title, wanting a deathmatch. This one was different than normal; it only contained one light tube, with the rule of whoever broke it would lose the match. That, along with the normal pinfall and submission rules, allowed for a tense match as both competitors would use the light tube to trap the other into pinfalls and other maneuvers. It took the calm, elaborate thinking key to Akito’s style to result in a victory. It would be his only defense and the last time he held the title. This match would be one of those rare times that outside of the jokes that was DDT’s signature style that they started being talked about.

The Extreme Title would go on to be tried out in many different ways in different companies. However, there’s something about Akito’s DDT Extreme Title reigns that felt special. The championship is usually comedic and the stipulations that were listed could’ve been played off for laughs. However, in taking them with just that little bit of seriousness, Akito’s DDT Extreme Title defenses added new depth to the title, taking it to the next level. Thus, the Extreme Title seemed even more unpredictable than it was before. The belt’s versatility, shifting from a mainly comedy prize to a jack of all trades championship, is its greatest strength.

Stay tuned to the Last Word on Pro Wrestling for more on this and other stories from around the world of wrestling, as they develop. You can always count on LWOPW to be on top of the major news in the wrestling world, as well as to provide you with analysis, previews, videos, interviews, and editorials on the wrestling world.  Make sure to subscribe to Wrestle Universe to see more of DDT and its talent as well as the various promotions operating under the Wrestle Universe Umbrella. Looking to talk wrestling, pro football, or any number of sports? Head on over to the LWOS Boards to engage in conversation with fellow fans!