After an intense card last week, IMPACT has delivered a mouth-watering line up for this week’s show with five matches announced so far. More of the Wrestle House crew return to the main roster including the ever-popular Kylie Rae and the Motor City Machine Guns will be in action again proving they are not just part time veterans.

These two teams will be renewing their Wrestle House rivalry as they last went head to head all the way back in July where The Deaners came out winners.  Will they be able to scrap their way to victory again?  Or will the XXXL just be too big to handle?

Rich Swann Will Be In The IMPACT Zone

.@GottaGetSwann will be in the IMPACT Zone TOMORROW at 8/7c on @AXSTV! #IMPACTonAXSTV pic.twitter.com/XqVSGTjahx

Rich Swann has his eyes on Eric Young after the “World Class Maniac” attacked him again after he announced his retirement.  Young is now the IMPACT Champion and Swann cannot be happy with this development as evidenced by their confrontation last week.

A rematch from last weeks show where Myers stole a win with a low blow despite being dominated by his opponent.  Revenge will no doubt be in the mind of Willie Mack as he looks to set things right as he has now tasted defeat at the hands of Myers twice in the last month.  Will Myers make it a treble over the former X Division Champion?  Or can Mack get back on track to end his five-match losing streak? 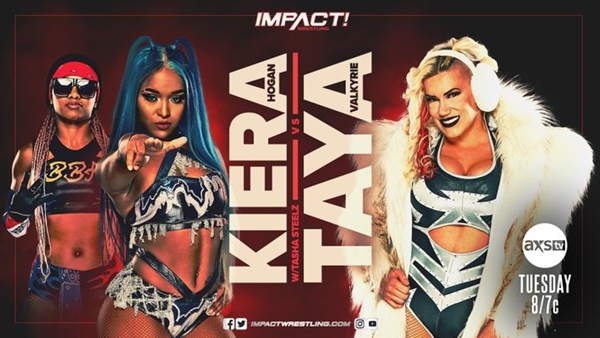 Despite grabbing a victory over Tasha Steelz last week Valkyrie was the victim of a post-match two on one attack from Steelz and Hogan before John E. Bravo made the save.  Can Taya get the win to make it back to back defeats for Hogan and Steelz? Or can Hogan get one over on the former Knockouts Champion and avenge her friend’s loss?

Fans are salivating at the concept of Knockouts Champion Purrazzo and her number one contender Kylie Rae being in the same ring together for the first time in IMPACT!  The duo last crossed paths all the way back in July 2018 for RISE where Rae was victorious.  Since then both women have enjoyed massive success with each garnering a dedicated fanbase.  While this is a tag match all eyes will be on these two but who will come out on top?  Will Purrazzo show why she is the champ?  Or will Rae step up and give the champion something to worry about?

The North, @The_Ace_Austin and @FultonWorld face The Rascalz and The Motor City Machine Guns TUESDAY at 8/7c on @AXSTV! #IMPACTonAXSTV pic.twitter.com/LpEnfpuqRa

After the title match last week between MCMG and The Rascalz IMPACT gave everyone a peek at how stacked their tag team division is with these four teams plus The Good Brothers all hitting the ring at the same time.  This week they show the division for all its worth with this eight-man tag match which looks certain to be the match of the night and is worth tuning in for alone.  MCMG have been a revelation since their return and shown that they haven’t missed a step during their hiatus and have only enhanced the stock of both The Rascalz and The North.  Which team will get the win?  Will The Good Brothers be in the building and make their presence felt again?

Will we get an update on Moose trying to track down EC3?

Is Heath going to get any closer to joining IMPACT?

Tune in Tuesday to find out!