Recently, Gatoh Move Pro Wrestling unveiled the dates for its upcoming ChocoPro events. Furthermore, we have seen a number of matches announced for recent shows. If there’s anything that can be certain, it’s that the shows in question will entertain long-time fans and newcomers to the purple-and-yellow promotion alike. Here are the scheduled matches that viewers can anticipate, in addition to the post-show janken tournament that has become a ChocoPro tradition.

On the last episode of ChocoPro, Emi Sakura and Mei Suruga formed a tag team with a new flair. Enter the Apple Queens, donning attire inspired by the musical tastes of Gatoh Move’s founder. Sakura has long since worn gear that harkened back to the late Freddie Mercury; to see Suruga sport complementing attire solidified their new status as a team. As the newly christened Apple Queens, Sakura and Suruga were successful in their match against Sayaka Obihiro and Chie Koishikawa, the latter of whom made her ChocoPro debut on the same show.

Apple Queens are coming to Ichigaya.

Despite coming up short in her first ChocoPro match, Koishikawa showed promise. The former fencer showed tremendous energy, charisma, and most importantly, fighting spirit. Despite her Gatoh Move rookie status, Koishikawa gave Sakura and Suruga a fight. On this show, she teams with a new partner in the form of Tokiko Kirihara. To say that this is a unique partnership would be an understatement. Though Kirihara doesn’t lack charisma, as evidenced by her Showa Era energy, she is certainly more subdued compared to the more vibrant Koishikawa. That said, Kirihara’s strikes and submission offense can’t be denied. Can the rookie duo in Koishikawa and Kirihara hand the Apple Queens their first loss as a dedicated tag team?

This episode of ChocoPro will see tag team partners collide. Longtime Gatoh Move fans will no doubt be familiar with the history of Yuna Mizumori and SAKI, collectively known as Tropikawild. This team took shape in mid-2018 and has since become one of the more successful tandems in the promotion. The fact that they are the only collective unit to win the Asia Dream Tag Team Championship on multiple occasions is a testament to this. Even when traditional events were canceled due to COVID-19, which led to the creation of ChocoPro, Tropikawild would reunite in time.

Tropikawild’s first ChocoPro match took place on episode forty-one, which also celebrated Emi Sakura’s 25th year in professional wrestling. On this show, Tropikawild emerged victorious in a three-way tag team match. Though Yunamon had teamed with other wrestlers in SAKI’s absence, including Sakura and Mitsuru Konno, fans longed to see her rekindle her partnership with SAKI. With that said, Tropikawild will have to temporarily set their partnership to the side as they compete against each other on this upcoming episode of ChocoPro.

It’s worth noting that the last time Mizumori and SAKI wrestled a singles match against each other was over a year ago. In February of 2019, they fought to a ten-minute draw. Furthermore, despite being a solid tag team, their offensive styles make for an interesting singles affair. While SAKI’s style tends to be more technical, Mizumori lives up to her reputation as a “power fighter,” relying on big moves to achieve victory. Whether you’re a newcomer to ChocoPro or have been around since the show’s inception, this will be a match not to miss.

It will air live on the Gatoh Move YouTube channel for free before being available for on-demand viewing afterward. To support the company, you can sign up for their Patreon, which features multiple tiers, or their own on-demand streaming service linked below. Listed below are the confirmed dates for the remaining episodes of ChocoPro season three.

Stay tuned to the Last Word on Pro Wrestling for more on this and other stories from around the world of wrestling, as they develop. You can always count on LWOPW to be on top of the major news in the wrestling world, as well as to provide you with analysis, previews, videos, interviews, and editorials on the wrestling world. You can watch Gatoh Move on YouTube and via the Gatoh Move Experience. Looking to talk wrestling, pro football, or any number of sports? Head on over to the LWOS Boards to engage in conversation with fellow fans! 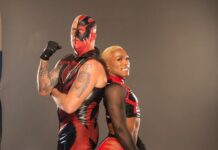