New Japan Pro Wrestling has been doing a tour this past month known as Summer Struggle. This tour has a conclusion: a show in an arena that NJPW hasn’t been in many years. This leads us to the aforementioned event. It will feature multiple title matches right before the infamous G1 Climax. NJPW will host an incredibly important show that we’re previewing today. 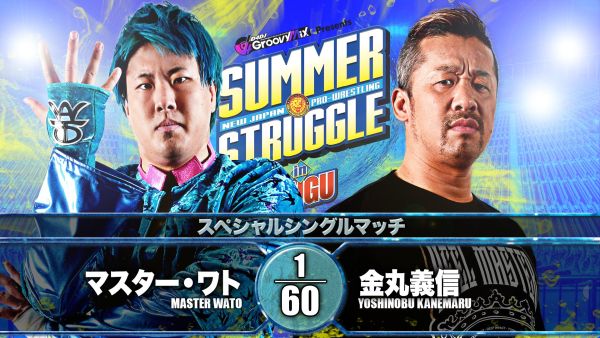 Master Wato made his debut for the company right after the end of the New Japan Cup. From there, he was rushed into a feud with Suzuki-Gun. Additionally, he’s part of the junior heavyweight division for the company. His next chance is against Yoshinobu Kanemaru, who is the veteran of this contest. Kanemaru has been making Wato’s life hell, but it’s been primarily in losing fashion, usually losing to Hiroshi Tanahashi in the tag matches. But with this match, Kanemaru wants to defeat Wato and start to prove that he’s not just a tag team wrestler, but also a capable junior wrestler.

The KOPW tournament was a creation by Kazuchika Okada. After the main titles were combined, he didn’t have much motivation to move on. Thus, he created a special type of tournament. On the 26th edition, a mini-tournament was created to crown a “King of Pro Wrestling.” Each match in the tournament had a special stipulation. Ultimately, a fatal 4 way would take place to determine a “King of Pro Wrestling.” This accolade does not have a confirmed championship belt and it’s currently unknown if this match is an elimination-based match.

Te two favorites of this match are Kazuchika Okada and SANADA. Okada has been dealing with Bullet Club the past few months and finally silenced them in a handicap match. Meanwhile, SANADA has been getting closer to defeating Okada. Their history has almost always been Okada winning, except for one match; this could be the second. El Desperado defeated Satoshi Kojima to get where he is, while Yano defeated Bushi. This match screams being completely odd for NJPW. This match is something different, which should make it interesting to watch. 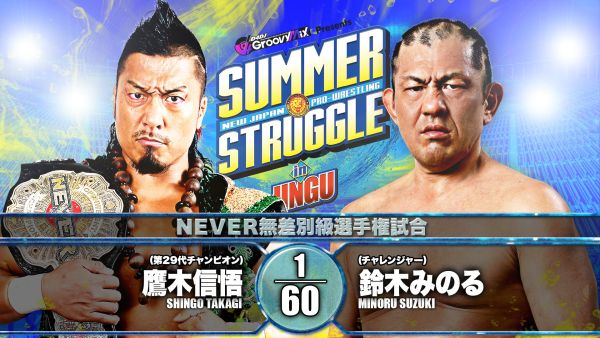 The NEVER Openweight Championship has been considered the official mid-card belt for many years for the company. In recent memory, however, it received an upgrade since the double title win at Wrestle Kingdom 14. This was due to Shingo Takagi’s first reign as champion. Shingo has defeated three men (Sho, El Desperado, and Tomohiro Ishii). It started with Ishii, then went to junior wrestlers that Shingo had problems with. The main focus of these Struggle shows were the encounters between Takagi and Minoru Suzuki. Suzuki challenged Shingo for the belt. This match screams potential for so many people as this will be the first time that these two have faced off in an NJPW ring.

Minoru Suzuki is a former NEVER Openweight Champion. Additionally, he is considered one of the top veterans of wrestling. He will attempt to gain one more championship by defeating one of the top prospects of Los Ingobernables de Japon. Out of the many matches to get hyped for, this match is one of them if you love strong style wrestling. It will be sweaty and even be comedic at times. More than anything, it will be brutal. Suzuki is also on a high of winning after defeating Yuji Nagata in the third edition of Summer Struggle, so both men are looking for the stars in this upcoming bout. 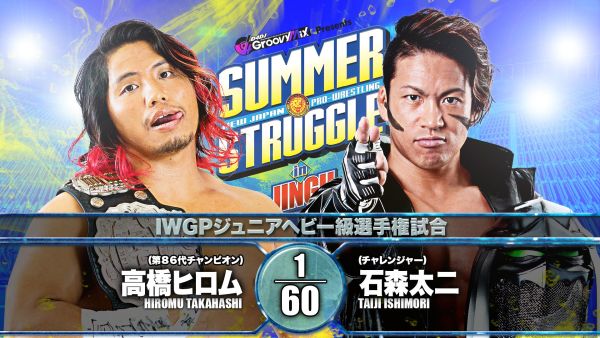 Hiromu Takahashi made his return to NJPW at the end of last year. His big first match was against the IWGP Junior Heavyweight Champion at the time, Will Ospreay. Takahashi defeated Ospreay to regain his championship. He would also defeat Dragon Lee in The New Beginning In Osaka. Once NJPW returned from break, the IWGP Junior Heavyweight Championship wasn’t as much of a priority. Takahashi hasn’t defended his belt since New Beginning. This makes the upcoming title match even more important, especially against a person he has beaten before.

Taiji Ishimori has been in NJPW since his debut in mid-2018. In recent memory, he has been getting quite a win streak, while Takahashi wasn’t. Takahashi has been getting pinned in many of the tag matches against EVIL. Even in Hiromu’s last big match against EVIL, he lost. Meanwhile, Ishimori looked even more dominant in this new version of Bullet Club. Could the bad luck continue for Takahashi with Ishimori becoming the IWGP Junior Heavyweight Champion for the second time in his career? Will Takahashi finally pick up a victory and retain his championship? All will be known in Jingu. 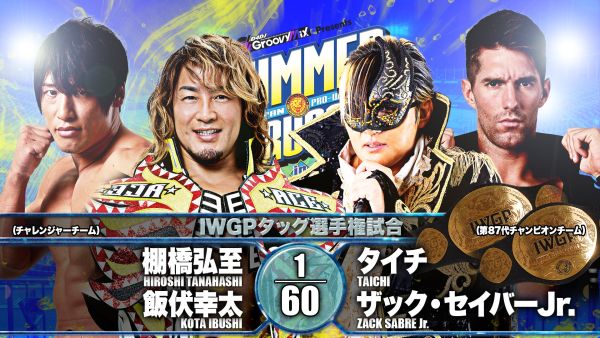 At Dominion in 2020, Zack Sabre Jr and Taichi defeated Hiroshi Tanahashi and Kota Ibushi to become the IWGP Heavyweight Tag Team Champions. This was considered a major upset. In recent memory, Taichi has been getting inside the heads of both Tanahashi and Ibushi, specifically the latter. Taichi has been hinting for many weeks at a brand new member in Suzuki-Gun. For many shows in the Summer Struggle tour, it looked like Ibushi was about to break and turn on his ally.

Because of this, Tanahashi and Ibushi are the next challengers in the first title defense against Sabre and Taichi. The last time these teams faced, Sabre and Taichi won. The circumstances going into this upcoming tag title match will be a turn of some sort. Ibushi has been showcasing in the weeks that he’s not going to turn on Tanahashi. After the match, though, could be another result entirely. The last time these two teams faced off, they had an incredible bout against each other. This another bout to look out for, especially at the very end. 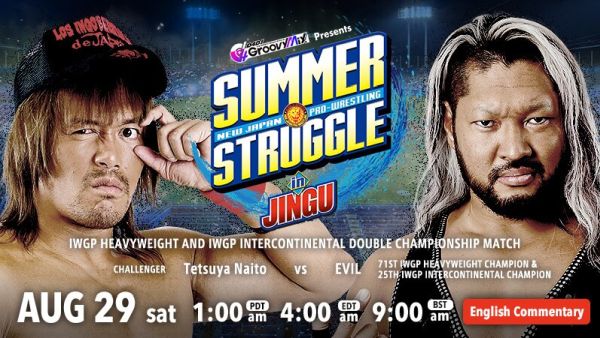 In the New Japan Cup Final, EVIL defeated Kazuchika Okada in a major upset. On the same night, EVIL turned his back on Tetsuya Naito and joined Bullet Club. At Dominion, EVIL achieved another major upset by defeating Naito to become a double champion. LIJ would start to break, with revenge on the mind. Takahashi would challenge Evil, though the champion retained. In this upcoming title match, Naito looks to regain his double championship once again by defeating his former student who betrayed him. Since losing his championships, Naito hasn’t been part of major matches.

This is Naito’s return to singles competition since losing the belts. In the Summer Struggle tour, Naito amassed three victories and five losses. Right before the G1 Climax, this marks an important time within NJPW. The winner of the G1 will the double champion, which usually takes place at Wrestle Kingdom. Will Naito regain his championship and cause a massive reaction that could break Jingu to its core? Will he once again lose to the villainous EVIL whose reign of terror could impact NJPW for many months to come? It will be decided in the main event of Summer Struggle In JINJU STADIUM.

Stay tuned to the Last Word on Pro Wrestling for more on this and other stories from around the world of wrestling, as they develop. You can always count on LWOPW to be on top of the major news in the wrestling world, as well as to provide you with analysis, previews, videos, interviews, and editorials on the wrestling world. Make sure to watch NJPW Summer Struggle In Jinju Stadium on NJPW WORLD.