NJPW Strong is the weekly United States show for New Japan Pro Wrestling. For the past two weeks, New Japan has set up a tournament to determine the next contender for the IWGP US Heavyweight Championship, which Jon Moxley holds. NJPW Strong included undercard matches to showcase some unknown or somewhat familiar talent. This tournament ends in the third week of action. In addition to the tournament final, viewers will see the return of one of the top 4 stars in New Japan. 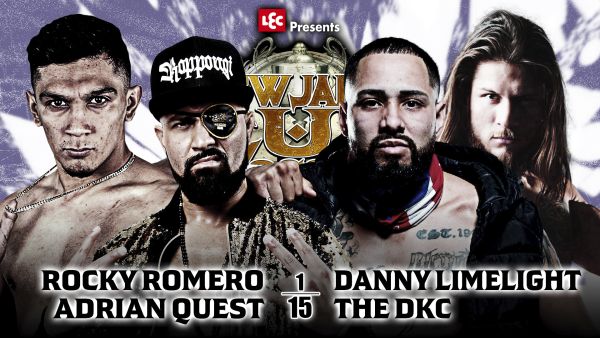 Adrian Quest & Rocky Romero vs. The DKC and Danny Limelight

Rocky Romero has been part of New Japan these past few weeks, teaming with the newer talent for the company. The talent in question includes Adrian Quest, who will debut for the company at this event. Quest is primarily known for his work in the California independent scene, which includes Bar Wrestling and GCW. The DKC and Danny Limelight have been part of this project for New Japan since the normality of the USA house shows for the company. They are often in the early matches of these events, too. 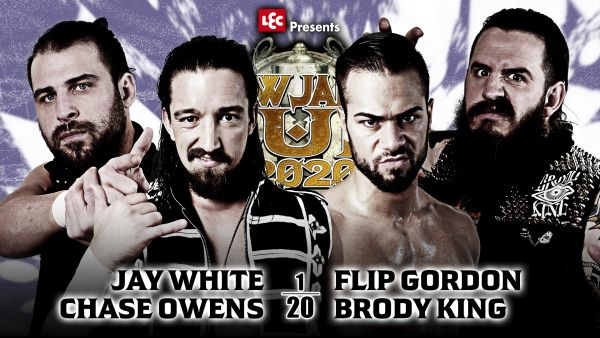 This is a match that has gotten much attention due to two returns to New Japan. The first wrestler making their return is Flip Gordon. He hasn’t been part of New Japan events since 2019’s Best of the Super Juniors. The second return will be the villainous Jay White, who hasn’t appeared for New Japan since February of 2020. His last high profile match was against Sanada at New Beginning In Osaka in February. He is considered by many as the leader of Bullet Club, though he hasn’t been part of the revolution the faction had in Japan as of June.

White will team with Chase Owens, who was last seen in New Japan failing to make the second round in the New Japan Cup; on the night, he went up against Flip Gordon and Brody King. Flip and Brody are a tag team in Ring of Honor, creating a weird match considering the heel vs. heel dynamic involved. King was last seen losing in the first round against Tama Tonga. This should be a very interesting bout.

KENTA stooped to some low depths to get past Jeff Cobb last week. What's he willing to do to take home the New Japan Cup USA tonight?

Kenta made his debut for New Japan at Dominion in 2019. He went into the G1, became hated by the fans, turned on Katsuyori Shibata, won the NEVER Championship, and held the championship for multiple months. He lost the championship and went after both the IWGP Heavyweight Championship and IWGP Intercontinental Championship. Failing to gain those titles, KENTA would join the New Japan Cup on NJPW Strong. He would defeat Karl Fredericks and Jeff Cobb to go into the finals. On the other hand, David Finlay came back in November from a near career-ending injury.

Finlay unsuccessfully challenged for the US Championship against Lance Archer. However, Finlay went on to have better luck in December, winning the World Tag League and the IWGP Heavyweight Tag Championship with Juice Robinson. While the reign was short, Finlay earned redemption after months of being out of action. This would also be showcased in the New Japan Cup, where he defeated Tama Tonga and Chase Owens.

This redemption could be part of the major upset if Finlay defeats KENTA in the finals.  Finlay and KENTA have never faced off against the current IWGP US Champion Jon Moxley, including this being the first-ever encounter between both of them. Finlay has challenged for the belt three times but lost each match. Meanwhile, KENTA hasn’t challenged for this belt. This match is major for New Japan. The winner will face Moxley in the very near future. New Japan’s USA expansion could become a-lot more juicer.

Stay tuned to the Last Word on Pro Wrestling for more on this and other stories from around the world of wrestling, as they develop. You can always count on LWOPW to be on top of the major news in the wrestling world, as well as to provide you with analysis, previews, videos, interviews, and editorials on the wrestling world. Make sure to watch New Japan Pro Wrestling on NJPW WORLD.